Chinese steel: On the brink of structural profitability 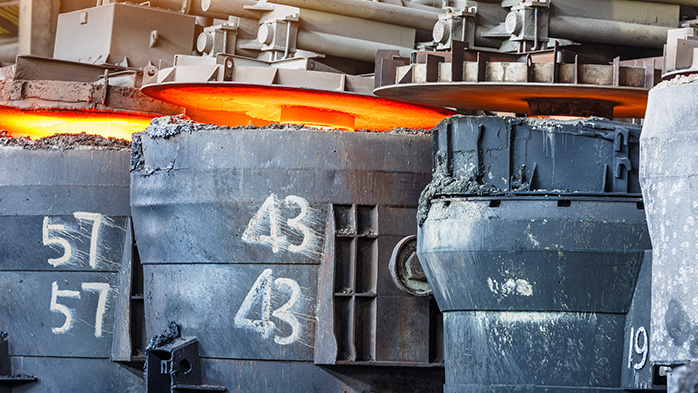 Chinese steel producers’ margins have grown fat this year.  We think this is partly due to short-term factors, and prices will fall back.  However, this is also likely evidence of improving underlying industry health.  Moreover, aside from the usual seasonal variation, we expect this to continue and support improved Chinese industry profitability.

Short and long term factors in play together this year
Chinese domestic steel prices have risen substantially this year, and with them margins. To some extent this was driven by short term factors and we expect prices to decline later in the year as short-term supply catches up with slowing demand and speculation is curbed. However, is there more fundamental, longer term support to prices and steelmakers’ margins? Having followed the progress of supply-side reform, and specifically steelmaking capacity controls, we think so. This Insight is the first of a series of five, to be published over the coming weeks, examining changes in Chinese steel industry supply, margins and price, and the impact on other markets.

Government EAF/BOF closures on track
Our current view is that capacity cuts are firmly on track. This outlook is shown in the chart below, and culminates in expected carbon crude steel capacity of around 970 Mt by the end of 2020. 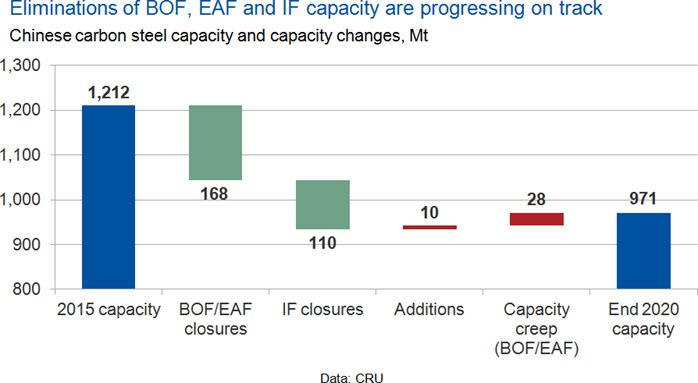 Targets and enforcement
In 2016, BOF and EAF closures amounted to 68 Mt. This year, NDRC reports show that the 2017 50 Mt annual closure target is at least on track and we judge that the annual total is likely to be achieved. We also think the target of reductions of 170 Mt by 2020 will also largely be met. We believe that both commitment to, and enforcement of these targets has stepped up, with written and public commitment to them, financial incentives and penalties, a tougher on-site inspections regime and a differential pricing power regime also in support. Some of the more interesting enforcement support measures include:

Induction furnaces recap – it’s all gone
All induction furnace capacity has been permanently closed. This happened in large part in 2016, with government crackdowns in the early part of the year. Some of the IF capacity closed at that time restarted, but was targeted in a second wave of wider scope in November and December as a mop up operation. We understand a small amount of IF capacity persisted into the start of 2017, though this was also purged by June at the very latest.

Supply reform - the main driver of higher utilisation rates
We forecast little to no growth in Chinese crude steel production in the coming years, a 2016 – 2021 CAGR of very close to zero. This view is based on a similar outlook for domestic demand given decelerating credit growth and construction investment, against the background of ongoing economic transition away from investment-led growth.

Therefore, the principal driver of changes in capacity utilisation over this timeframe is expected reductions in steelmaking capacity. Together with our production forecast, this gives rise to the forecast shown in the chart below. 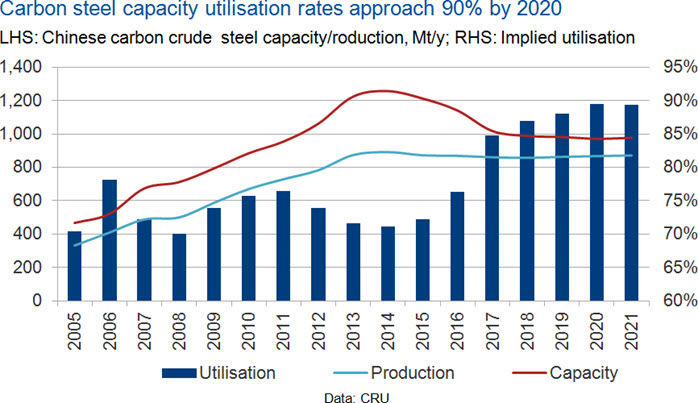 So what?
For the industry to be profitable (i.e. achieve an EBITDA margin of 8% or above on a sustainable basis), capacity utilisation needs to be 85% or higher, based on past empirical evidence. CRU data says that China now stands on the brink of this threshold and, aside from short-term perturbations, is likely to see a much healthier and profitable domestic industry in the years ahead. Domestic prices and profitability will be higher.

This will impact markets elsewhere as, with less available capacity and the domestic market more profitable, there will be less space for exports in rolling programmes and less incentive to export given higher margins available in the home market. Therefore export volumes will be comparatively lower and any exports will be priced higher. This has implications for global steel pricing.

These likelihoods will be examined in more detail in subsequent Insights in this series. The next of these will take a closer look at the impact of higher capacity utilisation on domestic steel prices and producers’ margins.