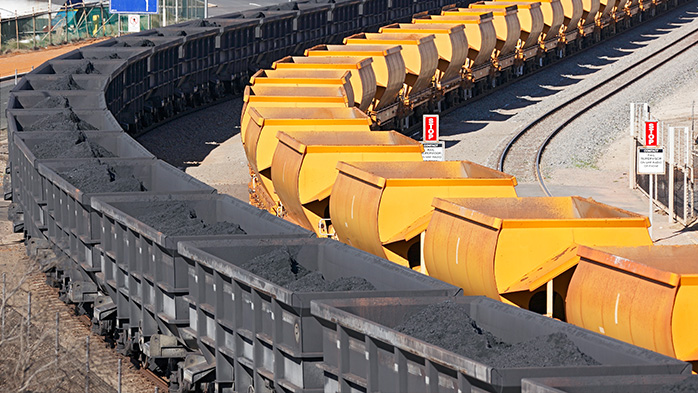 In China’s fight against pollution, The Metallurgical Mines’ Association of China (MMAC) recently announced that it will withdraw more than 1,000 licenses from iron ore miners in the country.  Contrary to media reports, our analysis show that this measure will have little impact on the Chinese iron ore industry.


Brief overview of iron ore mining in China
China is a country with plenty of iron ore reserves. However, almost all of the reserves consist of magnetite with an average iron content of~30%. In comparison, the largest iron ore producers in the world all mine reserves that consist of hematite and contain around 60% iron. As a result of the low Fe content, Chinese iron ore requires beneficiation to raise the iron content to levels suitable for sintering or pelletising. After beneficiation, Chinese domestic iron ore production consists mostly of concentrate with an iron content of ~64-66%. CRU estimates that, currently, around 68% of the concentrate is used in sinter plants and 32% in pellet plants.

Historically, the Chinese steel industry obtained most of its iron ore from domestic sources. However, as Chinese steel production increased rapidly in the early-2000s, domestic iron ore production was not enough to supply the country’s booming steel industry.  Today, China obtains only 19% of its iron ore from domestic production – a figure that CRU expects to fall to 15% in 2021, as lower iron ore prices continue to force high-cost Chinese producers from the market. 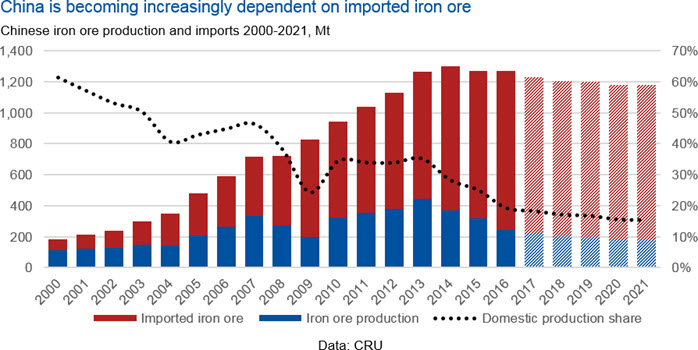 According CRU’s Iron Ore Cost Model, around 120 Mt of Chinese production is currently economically viable at iron ore prices just below $60 /t.  However, some of these mines in inland provinces are still able to supply iron ore to nearby steel producers at lower costs than imported iron ore.  They are therefore considered economically viable even at site costs above the current price level.  In addition, other mines that seem unprofitable are likely to survive because they are often owned by large state-owned steel companies.

After reaching a peak of 445 Mt in 2013, domestic iron ore production fell to 244 Mt in 2016 and we expect the 2017 output will fall to 224 Mt. We forecast that iron ore production in China will decrease further over the coming years, but the decline will be slower than in previous years.

Over the past year, CRU has observed a tendency among Chinese mines to stop responding to price changes in the sense that they no longer resume operations when iron ore prices go up. We believe this is linked to the Chinese government’s plan to cut pollution and emissions all throughout the steelmaking value chain. In line with this plan, more stringent environmental inspections have taken place in 2017 than in previous years. 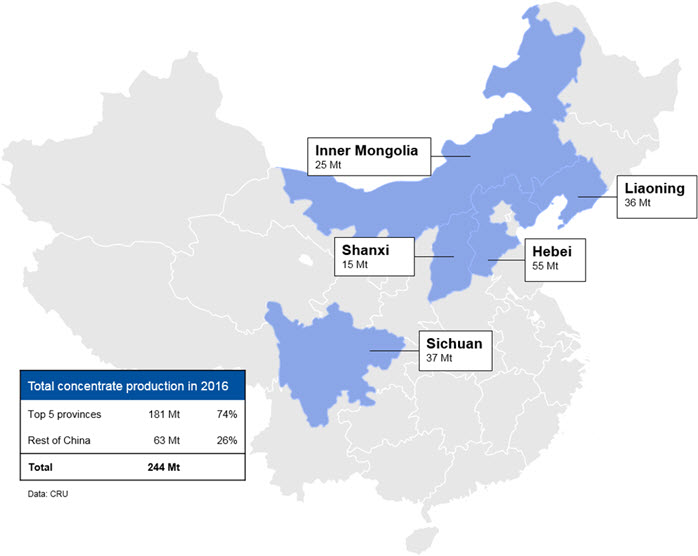 How is production impacted by license withdrawals?
In September 2017, the MMAC announced at a conference that the government will continue with its strict environmental policy by withdrawing over 1,000 iron ore mining licenses in the country. While some media reported this would bring significant impact to domestic production, our analysis, after further talks with MMAC, suggests that little impact, if any, is expected on domestic production. CRU’s research provides two key points that helps us to better understand the scope of these license withdrawals.

In addition to mostly targeting already closed mines, there is no clear timeline for when these license withdrawals will actually take place. Further, we believe that most of the still operating mines that might be affected by the withdrawals are profitable and should find ways to remain in the market over the coming years.

As such, this announcement has not changed our view. In the short-term, it is unlikely there will be any forced closures due to license withdrawals but, as already expected, unfavourable production conditions during the winter, our outlook for lower prices in Q4 and environmental pressure during heating season will ensure the ‘closure’ of some domestic mines this winter – but these closures are likely to be temporary in most cases.

Over the medium-term, these announcements are, in our view, also of little relevance to our market outlook.  The current population of mines in China are operational by virtue of their cost structure or, in some cases, ownership structure.  Even if licenses are withdrawn for the small volume of production identified above, we believe that many will be sufficiently profitable to survive where economic conditions allow (e.g. by investing in appropriate environmental and safety equipment).  As a result, we have maintained our production forecast for the next five years, as we have already assumed that unprofitable small private mines will leave the market under the lower price conditions. 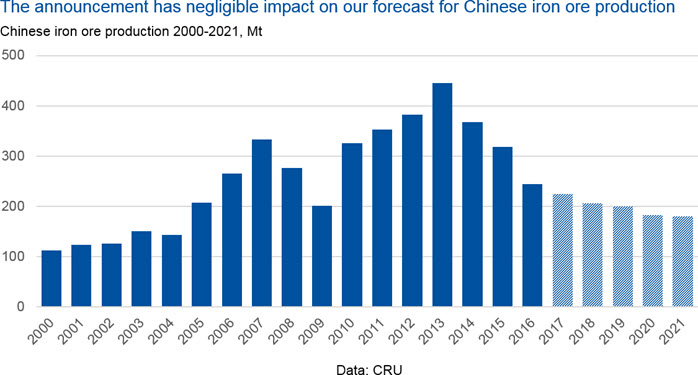