Egypt looks to capitalise on its low phosphate rock cost base 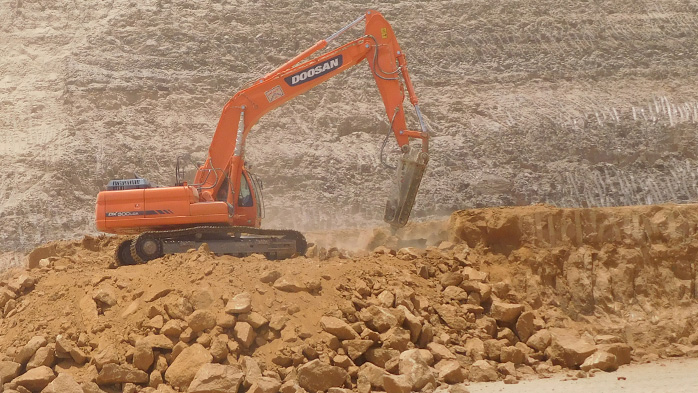 Egyptian phosphate rock miners achieve some of the lowest production costs in the 200 Mt/y industry, allowing them to continue exports in a difficult pricing environment. However, Egyptian operators are now following the trend of capturing greater value through downstream capacity and aim to ramp-up projects over the next five years.


Ahead of the publication of the 2017 Phosphate Rock Cost Report, CRU undertook a research visit to Egypt’s largest mine, Abu Tartour, as the mine’s operator, Misr Phosphate Co., plans to construct its first phosphoric acid plant at the site.

Miners can nevertheless endure low prices as they achieve some of the lowest production costs in the industry. As the global market undergoes change, with the share of traded rock to total demand shrinking, Egyptian rock producers now have advanced plans for downstream facilities, despite the quality limitations. 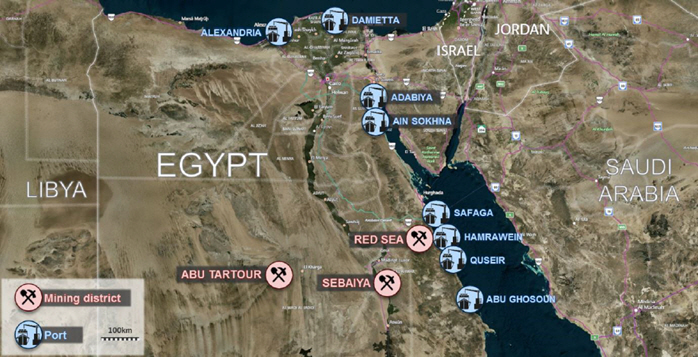 Abu Tartour Mine – Misr Phosphates Co.
Misr Phosphate’s Abu Tartour mine is located in the New Valley Governate in the Eastern Sahara Desert, 60km west of the oasis town of El Kharga. Phosphate rock mining commenced in 1979 using underground adit methods. However, continuous geotechnical problems severely restricted the mine’s capacity. In 2009, the mine operations were transferred to Misr Phosphate, which closed the underground section and commenced open-pit mining. Facing fewer geotechnical challenges, today the mine has a capacity of 3 Mt/y.

The deposit consists of a 3m thick, flat-lying, friable, sedimentary phosphate rock (phosphorite) bed overlain by shale, sandstone and limestone/dolomite overburden. The principle ore mineral is the carbonate-rich form of apatite known as ‘francolite’ with ore grades at 26 – 31% P2O5.

At the mining phase, Misr Phosphate is able to keep costs low by maintaining very simple but continuous methods and processes. Ore is first disaggregated by pneumatic jackhammers, not blasting, and loaded by front-end shovels into small 25-30 t tipper trucks. These travel 3-4 km to one of up to eight crushers. Crushers consist of a primary jaw crusher followed by two impact crushers with product separated by vibrating deck screens. All product below 2mm in size is sold as the final rock product. Oversize is stored until it is re-crushed once a week.

All operational Egyptian phosphate rock mines use similarly straightforward methods. Compared to many other mines around the world, which use drill and blast in addition to more complex flotation mineral processing systems, the simplicity of the methods used maintains low production costs. Furthermore, the weakness of the rock limits wear on machinery and crushers, reducing sustaining capital costs.

Straddling the Suez benefits Egyptian exporters
All phosphate rock product is transported by truck (between 50 and 80 t in haulage capacity) to port. Fuel remains cheap despite significant inflation of the Egyptian Pound in recent years and truck haulage fees have remained low. The majority of Abu Tartour’s product is shipped from the port of Adabiya on the Red Sea to Asia, with small volumes leaving Damietta on the Mediterranean coast to Europe.

Although road journeys to both ports exceed 1000 km, Misr Phosphate claims the cost is typically less than $10/t. Once storage and port handling fees are included the total cost of logistics to FOB amounts to $15-20/t.

Egyptian producers’ access to ports on both the Red Sea and the Mediterranean also permits them to avoid Suez Canal charges when selling to Asia and Europe. This can reduce shipping costs by up to $6/t, giving them a geographical advantage with sales to Asia.

Downstream fertilizer finally on the horizon
Egypt already produces modest volumes of phosphoric acid and finished phosphate fertilizers, but until recently there had been little investment in expanded capacity. Misr Phosphate is now finalising plans for integrated phosphoric acid plantat Abu Tartour, while Nasr Company for Intermediate Chemicals (NCIC) is reportedly constructing a plant at Ain Sokhna.Misr Phosphate intends to export much of the phosphoric acid to India. The company has a firm cost base with low site and logistics expenses. This should make phosphoric acid production financially robust and the company possesses adequate reserves to ensure long-term operations. However, the company must address some challenges before start-up:

Misr Phosphate intends to export much of the phosphoric acid to India. The company has a firm cost base with low site and logistics expenses. This should make phosphoric acid production financially robust and the company possesses adequate reserves to ensure long-term operations. However, the company must address some challenges before start-up:

Though there are significant quality challenges, the low-cost base of Egyptian phosphate rock miners gives the country a firm foundation for its growing downstream sector. Coupled with the nation’s extensive resources, Egypt will also remain an important supplier of low cost phosphate rock on the traded market for many years to come.