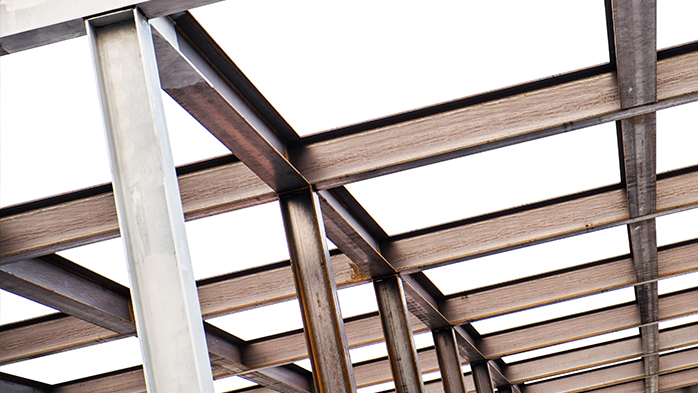 2017 is the half-way mark of the current 2014-20 funding period of the European Structural and Investment Funds, which consume nearly a third of the EU's budget.

2017 is the half-way mark of the current 2014-20 funding period of the European Structural and Investment Funds, which consume nearly a third of the EU's budget. € 275.5 billion is available to the eleven Central and Eastern European (CEE) Member States of the European Union, € 58.5 billion of which are available specifically for steel-intensive infrastructure projects. Poland will be the biggest beneficiary of the infrastructure projects, followed by Romania, the Czech Republic, Slovakia and Hungary.  However, only a tiny share of the funds has been spent so far, mainly due to the time needed for selection, approval, and planning of suitable investment projects. Disbursement of EU Funds is expected to be a major driver of investment and growth in the region in the next couple of years. Especially the ailing construction sector, which collapsed last year due to the transition between two funding periods, waits eagerly for new infrastructure spending. 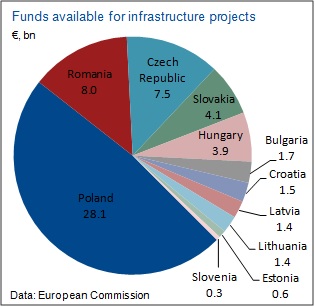 At the end of 2016, just 18.0% of the available funds for infrastructure have been allocated to specific projects, which is slightly less than at the same point of time in the last period. The share of money already paid to contractors was 3.9% in 2016 and is thus on the same low level as in 2009. Based on this, we assume that the implementation progress of the current funding period will follow the same pattern as the previous period, which ran from 2007 to 2013. Therefore, we expect that the majority of funds will be allocated on projects by the end of this year and that disbursement will accelerate significantly in 2017 before reaching full speed in 2018. A big share of the funds has been allocated only after the designated end of the last period and we expect this delay for the current period, too. 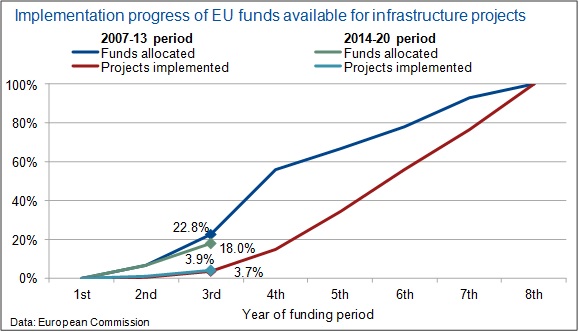 The CEE Member States of the EU intend to build 2,861 km of new roads and reconstruct 7,366 km of roads as well as reconstruct 4,186 of railroads in the period 2014-2020. Based on the implementation progress of the last funding period and our data on steel intensity of road and railroad construction, we expect that the EU-funded infrastructure projects in CEE will consume about one million tonnes of steel products in the course of the next five years - mostly rail and rebar but also structurals such as shapes, plates, H and sheet piling. Whereas the additional annual rebar consumption amounts to just 3% of rebar consumption in 2016, the annual demand for rail in the region may rise by up to a third only due to EU-funded projects compared to last year. 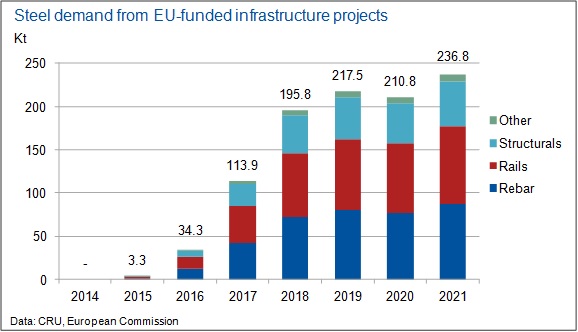 Conclusion
We expect that the construction sector in Central and Eastern Europe will receive a push from the launch of new EU-funded infrastructure projects. The EU Member States in this region have nearly € 60 billion at their disposal to invest in new roads or reconstruct existing infrastructure. The comparison of the implementation progress of the previous period and the pace of spending so far in the current period reveals that the two periods follow a very similar pattern. Therefore, we expect that disbursement of these funds will reach a reasonable level in this year and accelerate in 2018. Our calculations show that the implementation of the targets for new or reconstructed infrastructure will require about one million tonnes of steel products over the next five years. This will boost construction steel demand in the region, which fell by about a fifth in 2016, and provide some much needed sales opportunities for steel mills producing construction products.