How increased Chinese smelter output could hit the global markets

The next generation of zinc mines are ready to supply but are smelters able to treat all the concentrate? Indeed, a bottleneck on the smelting side underpins our view of rising concentrate inventories over the next few years, resulting in higher treatment charges.


While our base case no longer has smelter output constrained enough to meet only modest demand growth. In this Insight, we look at a 2% change to our base case Chinese smelter utilisation rates and what that may mean for the global zinc metal and concentrates markets.

Chinese smelter output surged in 2017 Q4
A major surprise in 2017 Q4 was the record Chinese quarterly smelter output figures. Smelter output totalled 1.68 million tonnes (an outright record and up by 5% year-on-year) implying very high utilisation (near 100%) for a brief period. What made this result more impressive was the backdrop of critical levels of concentrate inventories and record low spot TCs.

While this result undoubtedly reflected smelters resuming operations after maintenance and feed-related closures earlier in 2017, it also reflected an increase of secondary oxides and dusts into the feed mix, supporting higher utilisation rates during the quarter. Below we have a brief look at the sensitivities of the global market to Chinese smelter utilisation and what a 2% gain or loss in utilisation may mean for the market in terms of the market balance and prices.

Before applying such scenarios, it is worth noting that through our historical series, 94% has been the effective cap on China’s average smelter capacity utilisation, and even this figure has been impossible to maintain for more than 9-12 months. Over longer periods, 91.5-92% has been an effective peak. But it is also interesting that over the past decade, the average share of large smelters (> 60,000 t/y) has gradually risen and there has been a decline in share for both medium (20-60 kt/y) and small (<20,000 t/y) smelters.

Secondly, we add a further slippage allowance to our numbers which factors expectations of slower than planned ramp up of expansions and new smelters in the pipeline. The net effect is that the nameplate capacity projections for Chinese smelters are 8.97 million tonnes by 2022, which is 1.2 million tonnes higher than our par capacity forecasts of 7.8 million tonnes. Therefore, if potential output were modelled based on nameplate capacity alone, implied utilisation rates in China would be lower than our series suggests. 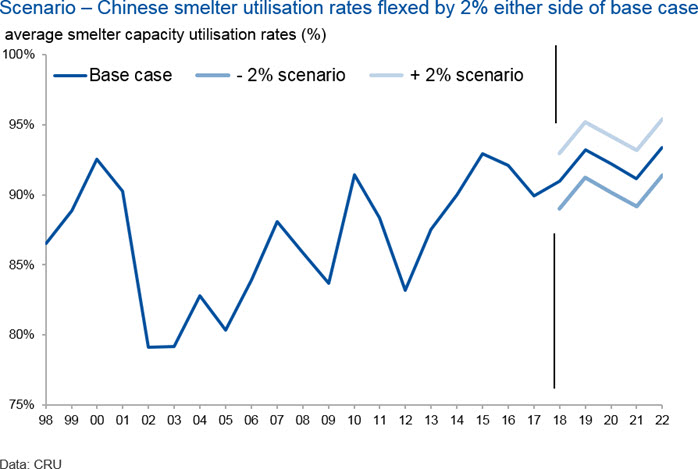 Scenario downside and upside risks
Our base case is that Chinese smelter utilisation rates are expected to average 92.2% over our five-year forecast period. 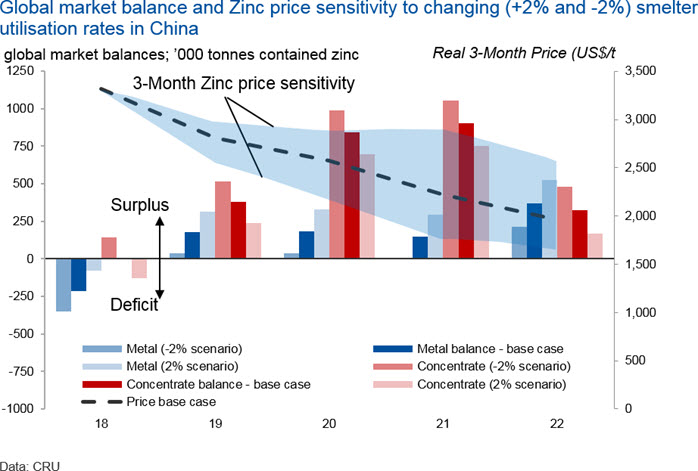 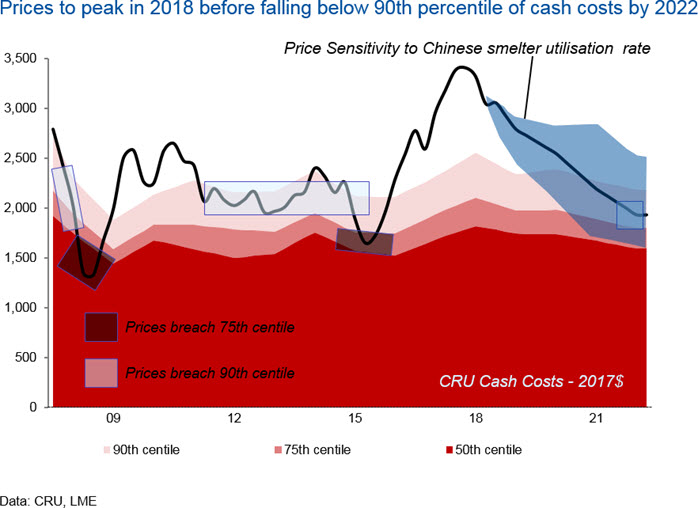 As small- to medium-sized smelters adapt to stricter environmental regulations there are two potential outcomes: i) further closures of small and relatively dirty smelters (we have seen numerous examples of small smelter closures over the past few years) and/or ii) expansion and modernisation plans to increase capacity and improve efficiency. Across the population both these outcomes would drive higher utilisation rates, although the former would of course remove nameplate capacity – albeit with a declining effect as the market share of small- to medium-scale smelters in China is already declining.

An excellent example of efficiency gains was seen over the past few years at Yunnan Copper’s zinc smelters in Kunming and Maguan. Rather than carry out detailed expansion projects, the company expanded existing capacity slowly through technology improvements. The Kunming-based zinc smelter capacity reached 110,000t by late 2017, up from 66,000 t/y in 2011. Capacity at its Maguan zinc smelter increased to 60,000 t/y from 30,000 t/y in 2013. We expect this kind of reform to be important in driving further consolidation and average capacity growth in the Chinese smelting sector and this could ultimately support higher utilisation rates than seen in the past.