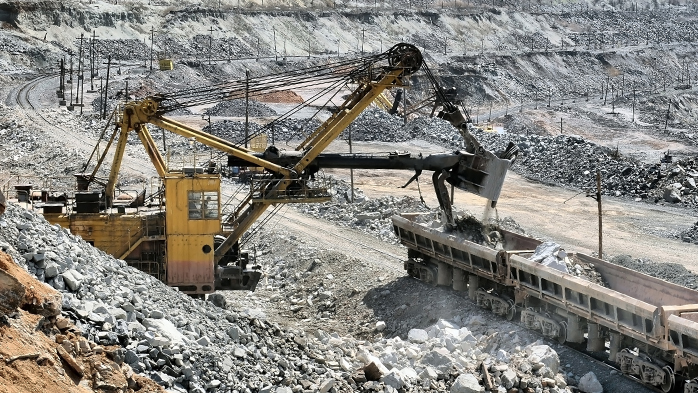 Steelmakers in China remain the largest bloc of purchasers of iron ore, accounting for 61% of global demand in 2015.


These steel mills continually evaluate whether to obtain iron ore from the seaborne market or from the large number of domestic iron ore mines.  There has been a turn towards greater purchases from the seaborne market in recent years, as measured by the level of import penetration of iron ore into China, however, there remains a large proportion of demand that is still satisfied by domestic sources.  Understanding how much iron ore China will produce domestically going forward is fundamental to understanding import demand and is one of the key determinants in setting the global seaborne price for iron ore.  This Insight describes an extension to this understanding, a linear optimisation model that adds further quantitative weight to CRU’s forecast of iron ore production in China and, therefore, our view on import penetration and price. 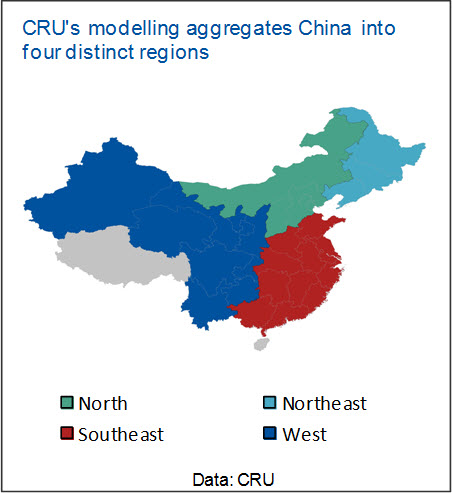 In our approach, iron ore demand fulfillment is modelled as a classic ‘transportation problem’, which entails modelling iron ore supply, demand and logistics within China with the goal of minimising the total cost of ore to the integrated steelmaking industry, through a process known as linear optimisation.  A basic premise of the model is that steel mills in China will make rational-commercial decisions regarding procurement of raw materials and will arbitrage between domestic and imported ores in order to achieve the lowest overall price.  By running iterations over a number of seaborne import prices, the model can identify those domestic mines that will form part of the lowest cost solution at a given import price (i.e. those mines able to sell ore at a price that the steel mill is willing to pay, given its next best option).  In turn, this provides an insight into the sensitivity of domestic production and, therefore, import penetration to seaborne import prices. 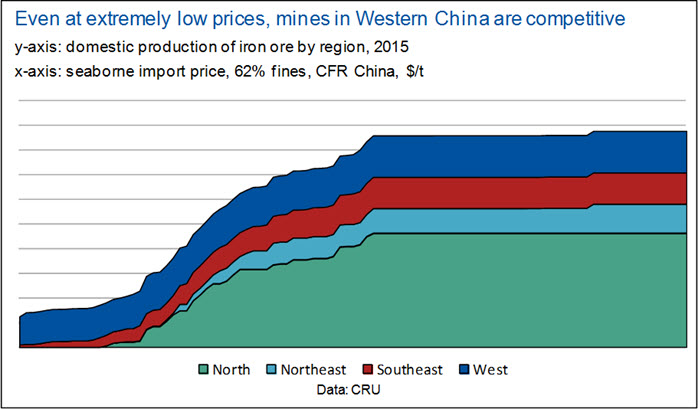 So what has this modelling shown us? On the supply side, the chart above shows domestic production for each region in 2015 over a range of seaborne import prices. Looking at this chart, the contrast between the price sensitivity of production in the Western and Northern regions is readily apparent, with production in the North predicted to drop off precipitously as prices fall, whereas production volumes in the West region appear to be almost invariant to price movements. Historical concentrate production in Sichuan and Hebei, the largest producers in the West and North regions of China respectively, supports this outcome. That is, between 2013 and 2015, when the import price fell from an average of $136 /t to $56 /t, concentrate production in China as a whole fell by 28%. However, the fall was a meagre 2% in Sichuan, whereas in Hebei production fell by 45%. The same analysis can be applied to the regions as a whole, with production in Western China falling by 2%, as production in Northern China fell by 37% over the same time period.

On the demand side, for each province that produces hot metal in China, an import penetration percentage can be derived at different import prices in a given year and the chart above shows that, at lower seaborne prices, provinces move more towards procuring ore from imports than from domestic sources. This is expected as the delivered costs of imported ore fall directly in line with decreases in the import price, whereas the delivered costs of domestic ores are determined by the cost of production. The model also shows that import penetration remains higher in provinces closer to the coast, where imports can be easily transported to nearby steelworks. This latter conclusion is, perhaps, obvious, but it highlights the need to forecast not only the quantity of hot metal demand, but also the geographical spread of this demand, in order to accurately forecast the level of import demand into China. 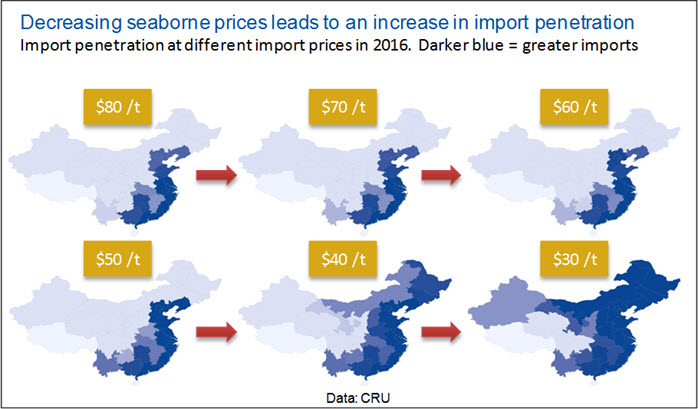 In conclusion, in order to produce a forecast of Chinese domestic iron ore production, which is essential for understanding future price dynamics, a number of factors must be considered. These include the volume of hot metal production and, therefore, iron ore demand, but also the location of this demand. Thus, over the forecast period, the growth of production at coastal mills in the Southeast region must be quantified and new trends, such as the potential future growth of industry in the West of the country, must also be considered. Another factor is cost inflation in China, both for the domestic iron ore industry, in terms of iron ore production, and for imported ore especially, in terms of the logistics costs in the country. Lastly, the impact of import price must be considered. Higher import prices render a higher proportion of domestic material viable and, conversely, lower import prices permit imported material to fulfill demand further inland. We have seen this effect in reality, with domestic production falling when prices fell to $40 /t in early 2016, before reversing the trend as prices edged back up over $55 /t.

CRU believes that the Chinese domestic iron ore sector acts as a moderator to the seaborne price, with its many disparate mines producing at different costs in different provinces able to increase or decrease production in response to the competitiveness of their products in their local area, as well as in neighbouring provinces.

Taking the above factors into account, and given our price forecast for the medium-term, CRU believes that future Chinese iron ore production will be made up of a core of production in Western China that is effectively isolated from imports, mines vertically integrated with steel mills and a core of competitive mines located throughout the remainder of China. Hebei will continue to bear the brunt of output reductions, due to its proximity to the coast. This analysis also suggests that more Chinese domestic production than previously thought could remain viable throughout the forecast period. This presents a downside risk to seaborne price forecasts. We will continue to monitor this situation and provide regularly and timely updates through CRU’s Iron Ore Market Outlook.