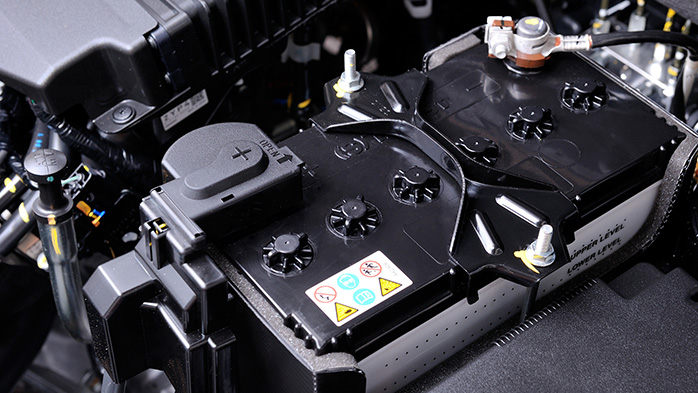 Korea Zinc (KZ) is now the single most important influence in the lead markets, playing a major role both in the global lead concentrates and refined lead markets.


Following the completion of an expansion in 2016, its Onsan plant in South Korea, at 0.5Mt/y refined lead capacity, is now the largest smelter in the world by some considerable margin. Moreover, with no integrated mining capacity, all concentrates need to be secured on the global custom market. Onsan also processes scrap materials, while the country boasts a number of dedicated secondary lead producers.  In this feature we review recent trends in concentrates, scrap and refined metal trade in this country, as well as looking downstream at trade in automotive batteries.

Concentrate imports slip back in 2017 as tight market bites
Since its start up in the early 1990s, Korea Zinc’s Onsan smelter has seen a number of expansions, the latest two occurring in the last ten years, bringing smelting capacity to 430,000t/y and refinery capacity to more than 500,000t/y. As a result, refined lead production has risen steadily, reaching 441,000t in 2016 and requiring an ever increasing supply of primary and secondary feed. Concentrate imports have duly risen steadily, surpassing 600,000 dmt in 2016, with an estimated lead content of around 350,000t. While the smelting complex includes an Ausmelt plant with a throughput capacity of 100,000t/y of secondary materials, the latest expansion is based on primary feed and concentrates now account for around 75% of total feed. Until 2016, this was supported by a well supplied global market for concentrates. Although in that year the availability of Australian concentrates fell as a result of Glencore’s mine cutbacks, KZ was able to secure additional tonnages of concentrates from Peru, Bolivia and the USA. South 32’s Cannington is also a major supplier of Australian concentrates, while around three-quarters of the Peruvian material is supplied through traders Trafigura and Glencore.

However, the company has fallen victim to the tighter concentrates market in 2017, and at the beginning of the year announced a planned reduction in its projected refined metal sales for 2017. While its 1Q2017 production results did not bear this out, the recently released 2Q2017 production figure of 95,260t represents drops of 16% year-on-year and 13.3% from the previous quarter to the lowest level since 4Q2015. Likewise, concentrate imports also showed a sharp fall in the quarter, particularly those from Australia and Peru. Supply to KZ would undoubtedly have been affected by the production difficulties at Cannington, and the transport difficulties in Peru, but the tight global market has made it more difficult to secure material from alternative sources. 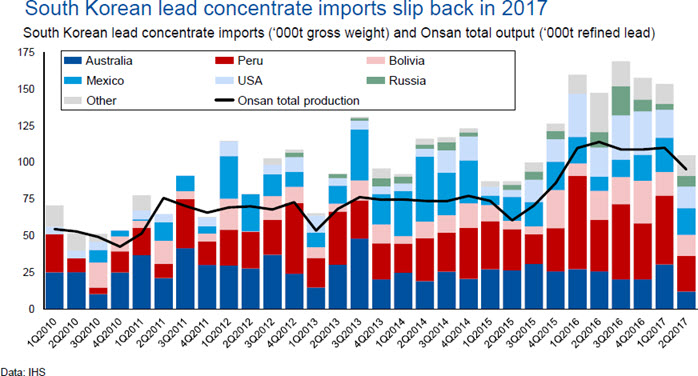 South Korean refined lead exports surge
The trends in concentrate imports and refined metal production have been mirrored in South Korean refined lead exports, which more than doubled from 132,000t in 2013 to 305,000t in 2016, although they slipped back a little in the first half of 2017 to 137,000t. The main destinations for the additional exports are the USA and Europe (principally Spain and Portugal). Indeed, both regions have seen imports from South Korea surge over the last two years, adding to total availability. 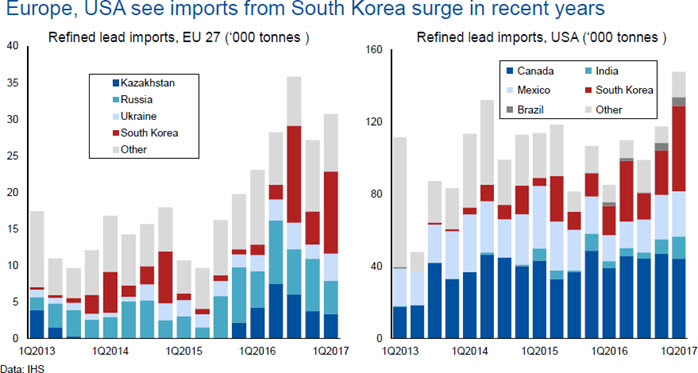 In the case of the USA, this has been partly offset by a drop in availability from “other countries”, including Australia, Peru and China, but in Europe it has been a more significant net addition.  Nevertheless, while we hear that South Korean lead is being placed in southern Europe, in the USA much is still sitting in warehouse in Baltimore.  The material is difficult to place; being high grade primary lead (99.99%), sellers are looking for a higher premium than for secondary lead (99.97%), but it is not the desired specification for battery manufacturers and can incur additional re-alloying costs. 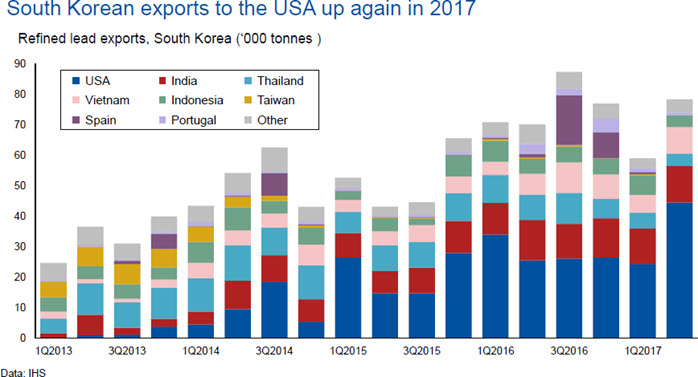 The traditional destinations for the South Korean lead are other Asian countries, including India, Thailand, Taiwan, Vietnam and Indonesia, and exports to these countries have remained relatively stable, with the exception of Taiwan which is now importing more from India and Kazakhstan.

As already noted, Onsan processes significant tonnages of scrap, and there are also a number of dedicated secondary lead producers in the country. CRU estimates that total secondary lead within South Korea has also been on the increase in recent years, now totalling around 400,000t/y refined lead. However, this is believed to be all used by battery manufacturers within the country.

While a rising car population (see below) is helping to support a growing secondary industry, the scrap import requirement is also increasing, and shipments from countries within the Asian/Australasian region to South Korea have grown in recent years. Australia and New Zealand have limited secondary processing capacity and export much of their domestic scrap arisings. However, exports from the USA have also increased, which is a growing issue for North American secondary processors as it exacerbates the tight domestic scrap supply. 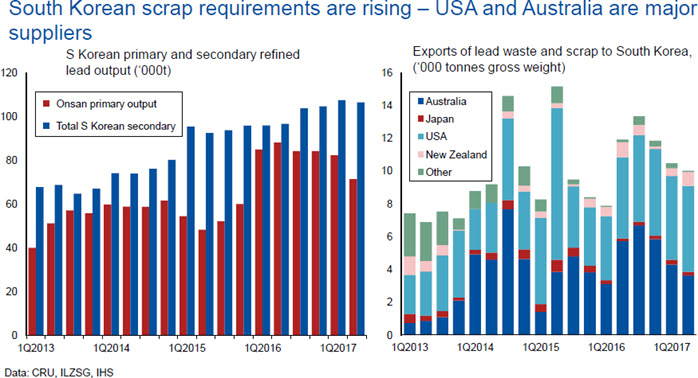 Automotive battery industry showing solid growth
Finally we look at the ability of the domestic battery industry to absorb the additional tonnages of refined lead being produced. While statistics on battery production are not available, an analysis of the underlying fundamentals and net battery trade suggests a growing industry.  Firstly, both the domestic car population and new vehicle sales have continued to rise in recent years, although 2017 is seeing a downturn in vehicle sales.  Both figures point to steadily increasing shipments of both replacement and OE automotive batteries within the South Korean market.  In addition, although still relatively low, stop-start engines now account for around 20% of the car population, requiring additional lead per battery.  Secondly, net exports of automotive batteries have been on a rising trend in recent years, growing from 27M in 2011 to more than 42M in 2016, a CAGR of 9.2%.  While exports to all destinations have grown, the largest increases have been to the Middle East, Europe and the USA.  South Korea is, however, a net importer of industrial batteries, importing around 2M units per year, the largest supplier being China. 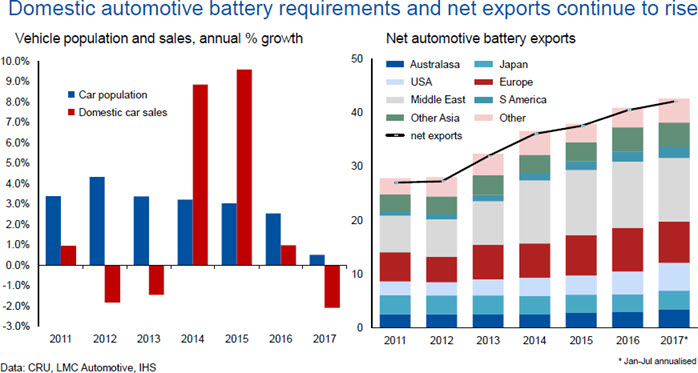 Explore this topic with CRU
Want to read more? Register to continue reading and gain access to all CRU Insights
Lead Zinc
Top