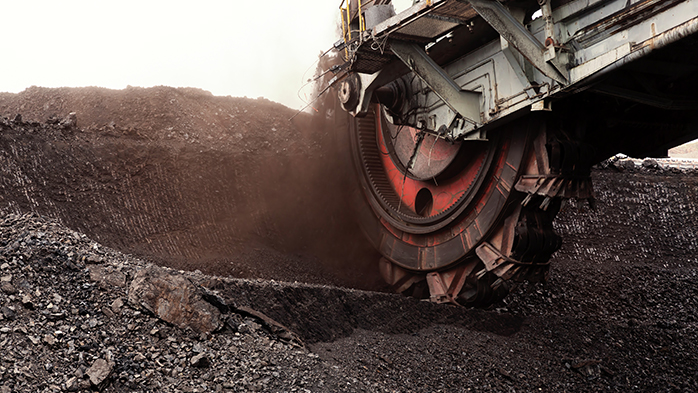 Metallurgical coal has been the star-performing commodity of the year so far.  The premium hard coking coal spot price reached $163 /t, FOB Australia in early-September, up 108% since the start of the year and the highest level since February 2013.


The rally has been fuelled by a shortage of Chinese supply, constrained seaborne supply, as well as strong demand, particularly in China and India. A number of players in the industry have suggested that higher price levels are here to stay, while others expect a sharp downward correction if/when Chinese steel production eases and if domestic coal output controls are relaxed. This insight sets out our latest outlook, given the latest developments and our discussions with key market players.

Chinese supply crunch
The Chinese government's implementation of the 276 working day production controls has been extremely effective in reducing oversupply and the policy continues, not only to be stringently enforced at a national level, but also broadly accepted by the coal producers, as they are now operating profitably. In the near-term, the supply tightness has been further exacerbated by transportation issues arising from heavy rainfall in July and August, which damaged a number of the major road networks that are used to transport met. coal and met. coke As a result, many steelmakers have been unable to source the entirety of their domestic met. coal requirements at a time when they have been looking to ramp up production in response to strong steel prices.

To illustrate the shortage of domestic met. coal, the following chart compares the premium hard coking coal spot price and domestic Chinese premium hard coking coal price. There is currently a differential of $47 /t, indicating that coastal steel mills have been caught short and have been forced to buy met. coal from the seaborne market to meet requirements. However, availability of spot material on the seaborne market is low. 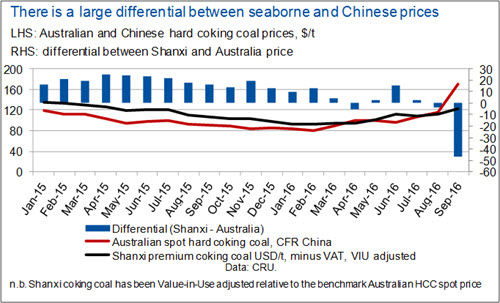 Seaborne producers do not have spot material to offer
While Chinese enquiries have increased, there is limited spot volume availability. Met. coal producers have locked in production schedules and cannot quickly reopen idled operations or ramp up additional production to take advantage of higher prices, limiting the potential for additional output to move into the spot market. More importantly, particularly in the short-term, there have been a handful of operational issues at seaborne mines over the last few weeks and months. In Australia, Vale's Carborough Downs mine declared force majeure after a roof collapse and is currently operating below full capacity, while there have been production problems at Anglo American's Moranbah North and Grosvenor mines and South32's Illawarra operations. In addition, a number of mines were impacted by heavy rainfall in July, including Wesfarmers' Curragh mine and Jellinbah's Jellinbah East mine, which each lost around 3-5 days of production. The affected mines are still catching up on lost production and mine inventory remains low. Outside of Australia, Vale is also shipping lower volumes from Mozambique, as the Sena line has been closed indefinitely after attacks on trains in June.

As a result, the oversupply, that was a feature of the seaborne market only a few months ago, has quickly reversed and met. coal producers have typically only been able to supply customers on longer-term, quarterly volumes. The concerns around domestic and seaborne supply has led Chinese mills to re-stock in recent weeks, while Indian mills have also entered the spot market to find that there is a shortage of material. In addition, trader speculation has also played a part in driving spot prices upwards since early-August.

Chinese steel production remains strong…
Finished steel production in China has been running at a relatively high level due to strong steel prices, which have been supported by positive sentiment and expectations of reduced levels of future supply. Indeed, the government continues to push ahead with its steel capacity closure plans. In particular, there has been a big emphasis on reducing induction furnace (IF) capacity in the provinces of Jiangsu, Fujian and Liaoning, where the bulk of IF capacity resides, and all have been making efforts to close capacity in recent months. However, we believe that some of this steel production has shifted to integrated facilities and the prospect of further closures has raised expectation that more production will transfer to integrated producers. This has shifted scrap-based steelmaking to the integrated route and provided a further lift to met. coal demand in the short-term. In addition, the blast furnace closures and reductions at other mills ahead of the G20 summit in Hangzhou has also shifted production elsewhere, which has increased met. coal demand in these regions. There also appears to be speculative activity in the market, with inventory build, particularly around Hangzhou, on the expectation that steel prices will rise, while provincial plans for steel capacity closures have become clearer and further implementation is expected towards the end of the year. This has raised the prospect of higher steel prices and producers are responding by increasing steel production.

…but prices are expected to correct downwards
In terms of the near-term, CRU understands that Chinese steel mills are currently buying higher grade iron ore, which is an indication that they will increase production in the coming weeks. We expect that this will support met. coal buying and help to maintain seaborne prices at high levels in the short-term, at least until the end-September and into early-October. At present, Chinese mills are able to absorb the higher prices, as margins remain healthy.

Nonetheless, we do not expect the high met. coal prices to be sustained for longer than a few weeks -current spot prices do not reflect supply/demand fundamentals, as the spot transactions that have set the prices have been relatively small, both in number and volume. Domestic availability of coking coal is also expected to improve, as China Railway is allocating more rail capacity for met. coal transportation from Shanxi, while the domestic transportation bottlenecks will dissipate once maintenance on major road networks is completed in September. As such, spot prices are expected to decline, although the strength in Chinese crude steel production will prevent prices from falling back towards early-summer levels.

In terms of Chinese met. coal supply, there were rumours circulating last week that the 276 working days policy would be relaxed to 295 days/year, particularly for thermal coal mines. However, the National Development and Reform Commission (NDRC) later met with a number of coal producers to discuss the coal price increases and, importantly, it was announced that the 276 policy would remain in place. Nonetheless, the NDRC will roll out a plan to allow some domestic thermal coal producers to increase coal output in response to sharp price rises, while some mines may also receive permission to operate for six days a week, up from the current five days, although this is not expected to impact met. coal production.

The magnitude of domestic coal price rises is a concern for the Chinese government, which needs to carefully control coal mine output, while concurrently continuing with the longer-term goal of closing high-cost capacity. It is clear that the government's intervention in the Chinese coal sector brings considerable uncertainty to the seaborne coal market in the short- to medium-term and the implementation of new policies will potentially lead to some volatility in coal prices.