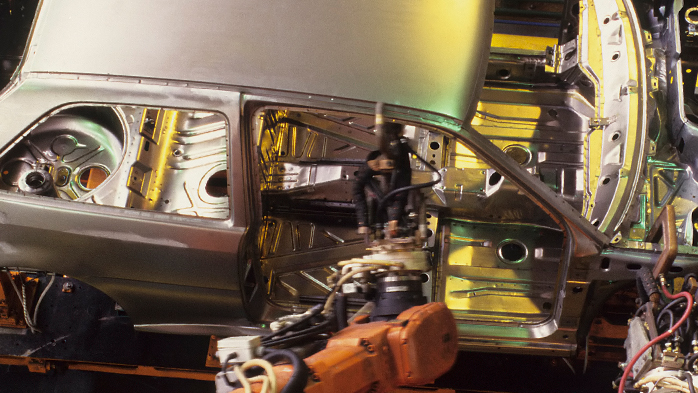 The term contracts for automotive buyers are in progress in Europe, this year amid a strong steel sheet price rally.  Automotive is one of the key end-use sectors for the European industry, partly in volume but certainly in value terms.


Over the past year the sector has been a strong source of demand, on the back of car sales that have proved much stronger than many estimations.

The reasons behind that are varied, but at the global level include strong sales in China related to a tax break on purchases of small vehicles, and at the European level at least include a combination of factors that have influenced strong consumer spending, such as low inflation, oil prices and unemployment. Especially in the key German market such factors appear to have combined to push people to get out and buy new cars.

Whether or not this strong sector performance will continue in 2017 is open for debate. To some extent the steel sheet contract negotiations will look forward and take account of expectations from both sides regarding the coming year. But for this piece I thought it interesting to quickly examine recent spot sheet price performance in the context of the time periods during which these term contracts have been agreed.

To do this we can consider a simple chart as shown below. This plots the progress of the spot HDG coil price in Germany, excluding the coating extra, and overlays that with markers at 6M and 12M intervals, set to be one month prior to the calendar period contract settlement that they influence. So, for example, the 12M 2016 contract will have been influenced by spot prices prevailing in December 2015, the 6M H2 2016 contract by spot prices in June 2016 and so on. 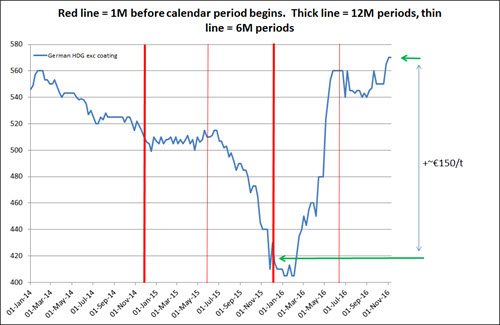 Though it is an opaque area, our contact with the market in recent weeks has suggested that the mills are seeking price increases on the 12M deals of €150/t and in some cases more. From the chart, that level of increase corresponds well to the total rise seen in the spot market between last December and now. Given that we expect spot prices to continue increasing into Q1 2017, asking for +€150/t might even be considered conservative by the mills.

This also illustrates what a fantastic deal the auto companies have had in 2016. Anyone still paying Q4 2015 prices has made a huge opportunity gain versus the spot market. One wonders whether a small part of the strong auto performance this year has had something to do with this deal - a push to make cars while the steel is cheap!

On the 6M deals, the chart would suggest that the H2 2016 deals might have been justified at a level of +€140/t or so. That would be a best case for the mills and our market feedback suggests that nothing like that level was actually achieved. Maybe +€80-100 was closer to the actual outcome, which may have taken the contract level back to something close to the H2 2015 deal. In which case there looks to be some justification from the spot market for also seeking period-on-period increases in these deals.

From the buying side, the auto makers may consider that current spot prices are in part being driven by trade defence action. While higher raw materials costs are certainly a factor, trade barriers are a key mechanism through which mills are currently proving able to increase. Part of the deal on trade barriers is surely that they provide the protected industries some scope to enact the necessary adjustments to compete against lower-priced competition, when that competition is not traded unfairly. At some point the barriers are removed and industry must be able to thrive without them. In that context buyers may argue that mills should seek to make these adjustments and not simply pass everything onwards down the supply chain.

We will see what outcomes prevail but it is certainly set to be an interesting negotiation period this year.