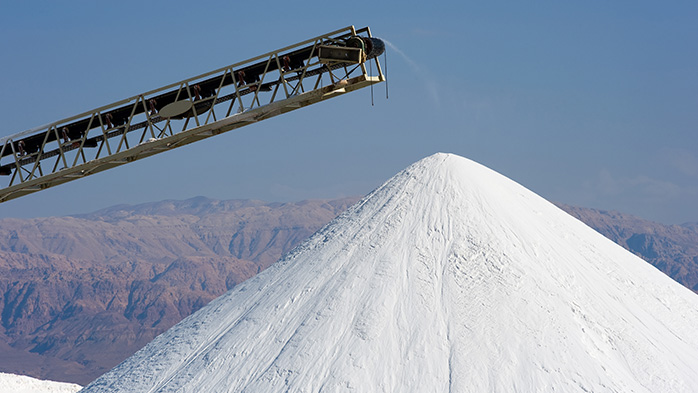 SOP commands a price premium to MOP primarily due to the absence of chloride, to which some crops, including fruit and nuts, are sensitive. As a result, SOP demand is comparatively price inelastic—consumers are reluctant to switch to lower priced MOP when the price of SOP increases.

Since 2012, prices of MOP have fallen over 50%, due to intensifying supply competition and low crop prices. However, SOP prices have strongly outperformed those of MOP over the same period.

Since 2015, SOP prices, and the premia over MOP, have become increasingly variable across key markets. The charts show that until 2014, SOP prices rarely diverged by more than USD100 /t between regional markets. From 2015, significant supply and demand developments have driven major disparities in regional prices. 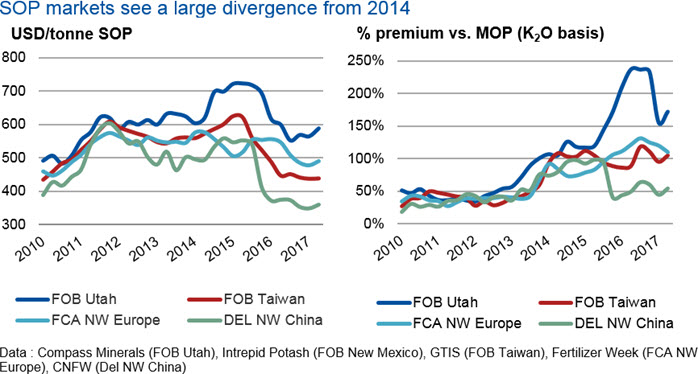 Supply issues have maintained prices in Europe
Production volumes at K+S’s Werra complex in Germany – the largest producer outside China – have declined, as the company struggles to find sufficient disposal outlets for its saline wastewater. Belgium’s Tessenderlo has capitalised on K+S’s production limitations following completion of its new calcium chloride plant at its Ham complex, allowing increased output. Evergrow in Egypt has made the largest investment in secondary SOP capacity outside China in recent years, shifting Egypt from a net importer to a substantial exporter. The ramp up in export volumes from Evergrow will lead the country into direct competition with K+S and Tessenderlo’s existing markets in North Africa and Europe.

Capacity expansion in China has steepened the discount in Asia
Prices in Northeast China fell by more than USD200/t during 2016 and 2017, as the market experienced excess secondary capacity. Although the international market is insulated from China because of a RMB 600/t export duty, producers in Taiwan have been forced to lower prices to disincentivise significant export volumes from China. 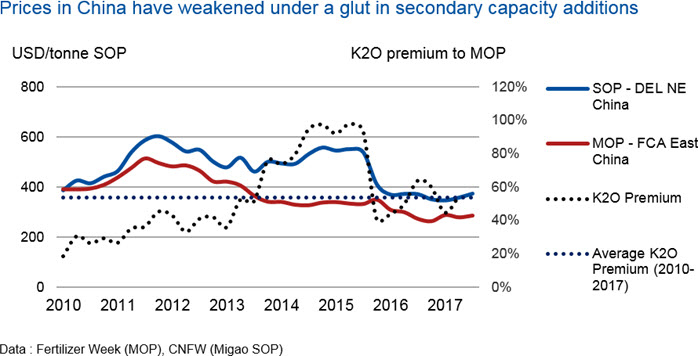 US market the standout performer
Despite a USD150/t decline from their peak in 2015, prices in the United States have remained well above markets in Asia and Europe. Compass Minerals has enjoyed high netbacks in the Western US, where they face little import competition and their largest consumer is California’s almond growing industry. Although almond prices have dropped 40% from drought-driven highs in 2014, planted hectares have continued to expand to record levels, maintaining strong demand.

Can SOP prices maintain such wide variation?
As the major SOP markets have become more disconnected and additional capacity comes on stream, the market becomes prone to major changes in trade flows and a reconvergence of prices.

A recovery in production at K+S and increased competition from Evergrow could force prices in Europe closer to Asia. High prices in the US may drive producers in Asia to increase sales into the West Coast market.

These topics are explored in more detail in The Potassium Sulphates & Potassium Nitrate Market Outlook, which provides producers, traders and investors with a comprehensive outlook for supply, demand, trade and prices in the potassium sulphate market.