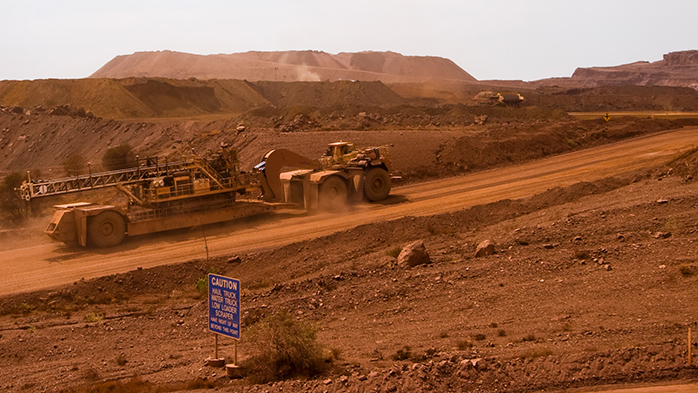 This insight looks, in detail, at the proposal in Western Australia (WA), by the state leader of the National Party, to increase the mining lease payments paid by Rio Tinto and BHP Billiton from A$0.25 /t to A$5.00 /t.


The proposed change will only affect mines that have been in operation for at least 15 years, but would make existing mines less profitable and reduce the net present value (NPV) of any new mines built by the two companies over the lives of those assets. Ongoing reserve depletion at existing assets means that replacement mines will need to be brought online in order to maintain production volumes. The proposed change to mining lease payments could result in investments being deferred or cancelled due to reduced profitability or a perceived increase in legislative risk. The key date to watch is 11 March 2017, when the next WA state election is scheduled to be held.

It seems unthinkable for a country that exported 767 Mt of iron ore in 2015, but Australia actually had an embargo in place from 1938 onwards preventing exports of the steelmaking ingredient. The Commonwealth Government only moved to end the embargo when the sheer abundance of ore reserves within Australia began to come to light. The repeal was passed in 1960 and the 'Australia Iron Ore (Mount Goldsworthy) Agreement Act 1962' in WA was the first legislative act to facilitate large-scale iron ore mining in the region, with mines such as Goldsworthy, Tom Price, Newman, Pannawonica and Paraburdoo starting production in the 60s and 70s (n.b. the original act was substituted with an expanded version in 1964). As part of this state agreement, a lease rental payment of two shillings and sixpence for each tonne sold was to be paid to the state government for all iron ore mining leases in operation for 15 years or longer. This was changed to 25 cents with the advent of decimalisation in Australia in 1966. The payment has been described by the WA Department of Mines and Petroleum (DMP) as "an additional rental providing a mechanism for the Government to recoup some of its investment in infrastructure in the region". This payment is made in addition to standard royalties, which are levied at 7.5% of the FOB value for unbeneficiated ore or 5.0% of the FOB value for beneficiated ore on all miners in WA, regardless of the length of mining operations.

Fast forward 50 years and the lease payment is currently being paid by BHP Billiton, Rio Tinto and Cliffs Natural Resources, although more companies are set to be impacted in the future, with the DMP collecting A$120 M in lease rental payments in 2015, as opposed to just under A$4 billion in total iron ore royalties. The lease payments were far from most people's minds until August 2016 when the new leader of the National Party of WA, Brendon Grylls, catapulted them into the spotlight by proposing to increase the levied rate from 25 cents/t to $5 /t for Rio Tinto and BHP Billiton operations that satisfy the 15 year operation threshold. Presumably, Cliffs' operations were overlooked because of the expected end of mining in 2019, as a result of reserve depletion, the size of the company's overall operations in Australia or as a reflection on the different levels of government assistance provided to Rio Tinto and BHP Billiton. A further point to consider is that the payment was never indexed. If, for argument's sake, the payment was originally linked to inflation, the levy of 2 shillings and 6 pence in 1962 would be roughly equivalent to A$3.5 /t in today's money, some 30% below the level proposed by Mr. Grylls.

The proposal is just that at this stage, but a vibrant debate has already started across Australia, with both sides beginning to set out their positions, and this debate will likely last until, at least, the next state election in early-2017. One media outlet has reported that the proposed changes were announced with the aim of 'kickstarting a national debate on the Goods and Services Tax (GST) reform after years of inaction'. Whatever the intentions, the proposal has certainly caught the attention of the mining sector, as well as the wider WA public.

Brendon Grylls' argument is that WA is in a poor financial position and needs to raise additional revenue to stop the state's deficit increasing. Mr. Grylls claims that A$7.2 billion in additional revenue will be generated, part of which will be used to fund a two-year payroll tax relief package to encourage small businesses in the state to expand at a time when, according to official statistics, employment is falling. With Rio Tinto's Pilbara iron ore operations posting a 58% FOB EBITDA margin in 2016 H1 and BHP Billiton's Western Australia Iron Ore segment posting a similar 53% EBITDA margin over the 2016 Australian financial year, Mr. Grylls is likely to use these figures to support his two main points that a) the two companies have benefited from the government's support and b) they are in a position to contribute more to the treasury for the benefit of the state at a difficult time.

From the miners' side, one element which Mr. Grylls appears to have neglected is the intangible element of legislative stability. Long-life assets such as iron ore mines require many years to recover their initial investment. If investors are unsure of their future obligations to local, or National, governments, the potential profitability of their investments becomes less certain and higher rates of return will be demanded and they may simply choose to invest elsewhere where the perceived risk is lower. During a time of widespread capital constraints and balance sheet pressure in the mining industry, this will be a significant risk consideration for both Rio Tinto and BHP Billiton.

With Rio Tinto's board already approving the commencement of the development of Silvergrass in August of next year, the spotlight is currently on BHP Billiton. CRU estimates that the Yandi operation, which produced 73.6 Mt of iron ore in 2015, is set to stop production by 2024 at the latest, meaning BHP will have to build a new, replacement mine or accept a large loss of production and market share (n.b. Yandi accounts for approximately 30% of BHP's Pilbara production). Most likely, this would require the development of the South Flank deposit, at a potential capital cost running into billions of Dollars. Given the time taken to develop a mine of this scale, the investment decision must be made in the near future to ensure the mine is operational before production drop off. BHP are arguing that the proposed change in lease payments will make the mine less profitable, meaning other capital projects in the company's pipeline may take preference and the mine may not be developed, leading to an overall loss of employment in WA and revenue for the region. A counterpoint to this is that any new mine will be under a new mining lease and, therefore, the lease payment will not commence until after 15 years of operation. However, given that mines started in the 1960s are still operational today, a $5 /t charge could potentially amount to hundreds of millions of dollars in additional payments over the life of the asset.

Effects of the change

To better understand how the proposed change could affect the investment decision of BHP Billiton, we created a hypothetical NPV calculation for Yandi's replacement mine. Assuming the mine is built on a seperate mining lease, has a development capex. of $3.5 billion, a financial discount rate of 10%, a 40 year mine life at a full capacity of 70 Mt/y, FOB Business Costs excluding royalties in line with Yandi's costs of $25 /t and a 5% discount to the benchmark price due to the production of lower quality fines, the change in mining lease payments would reduce the NPV of the project from $9.0 billion to $8.4 billion and the FOB EBITDA margin from 41% to 34% when the lease payments come in during the 15th year of operation. This estimate supports our view that the change wouldn't affect the underlying profitability of the asset, but could make the project less attractive compared with other development options across BHP's project pipeline, especially those in jurisdictions where there are no proposed changes to the cost base due to Government action.

Rio Tinto may not have to make a further large-scale investment decision in iron ore in the near future, but the nature of reserve depletion means that further decisions, such as the potential development of the Koodaideri mine, will need to be considered in the not-too-distance future. The recent announcement to shut down the Hope Downs 4 mine for two weeks over Christmas, despite being due to production targets being reached ahead of time, could also serve as a reminder of the options available to Rio Tinto if mining costs were to increase due to the proposed payment increase. The recent announcement of further job cuts across Rio's Pilbara operations also shows that it remains serious about keeping its cost base low with iron ore prices set to decline in 2017. The continuing deployment of autonomous equipment could see further cuts to come, with BHP Billiton and FMG both deploying autonomous equipment to varying degrees across their Pilbara operations. 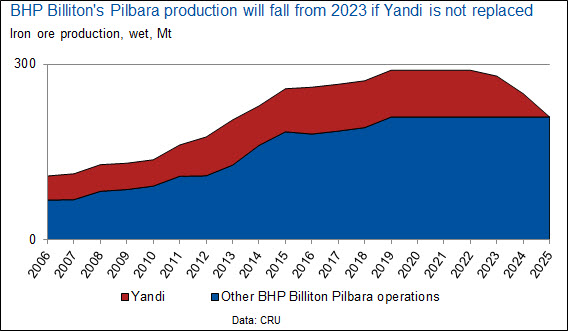 Another aspect to consider is that Rio Tinto and BHP Billiton also saw their royalties increase through an adjustment to their state agreements in 2010, bringing them from 3.750% of sales value to the 5.625% paid by other miners producing iron ore fines, which then increased to 7.5% for all unbeneficiated ore in 2014. This represented an end to concessionary rates to the big two miners, bringing them in line with other miners, but obviously resulted in additional costs being levied on their operations. When the current royalty rates in WA are compared with the 2% rate paid by Vale in Brazil, it is understandable that both Rio and BHP may feel that their competitiveness is being eroded.

Although at this stage only BHP and Rio have been targeted, it is safe to assume that other companies, such as FMG, will be watching with interest, especially as their current operations move closer to the 15 year operational threshold. Any change to general mining legislation in WA will affect them too, so if the $5 /t payment is implemented, it would be a simple amendment to apply the charge uniformly across all mines.

When will the change happen

The date of the next state election in WA is set for 11 March 2017. The result that would lead to the highest probability of the proposal coming to fruition is if the Nationals were to hold the balance of power. This would allow them to bargain with the Liberal Party to ensure some of their policy proposals are supported in order to form a coalition Government. Currently, both other major parties, Liberal and Labor, have come out against the proposal. However, history shows that there is a chance that the Nationals' plan could work. A similar proposal has been passed into legislation before in WA. Mr. Grylls' party, under his leadership, previously managed to push a "Royalties for Regions" policy into legislation as part of power-sharing discussions with the Liberal Party following the 2008 state election, leading to a proportion of state royalties being set aside for spending in rural areas within the state. While that proposal didn't affect the bottom line of the miners, it certainly shows a precedent for this type of manoeuvre to succeed, and that is why everyone is taking the proposal so seriously.