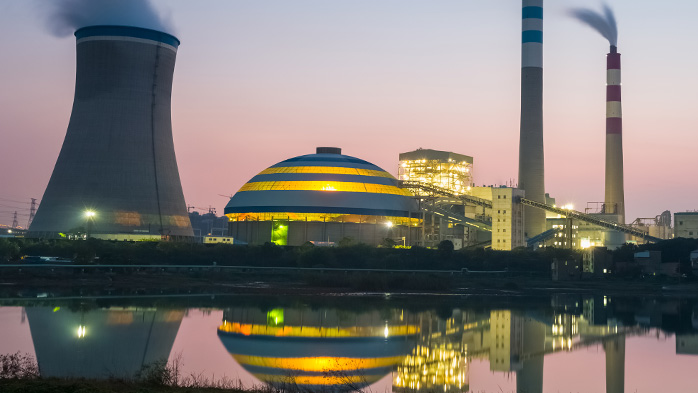 The Chinese NDRC is restructuring the domestic coal sector to improve its competitiveness. It plans to close smaller, less competitive mines and to replace the volume with larger, more efficient mines.


Using CRU’s Thermal Coal Cost Model, our analysis shows that the increase in Chinese costs over the next few years due to rising labour costs and challenging mining conditions will be partially offset by rationalising high-cost capacity and start-up of new low-cost capacity. Chinese thermal coal Business Costs are forecast to increase at CAGR of 2.4% in real terms between 2017 and 2021, a rate that is slower than our Business Costs forecast for seaborne producers outside of China. Furthermore, our analysis shows that the marginal cost level in China (i.e. the operations that set prices in the medium-term) is little changed.

The Chinese coal sector is in need of reform
The Chinese coal industry is extremely fragmented, comprising of over 10,000 mines at end-2015 and approximately 70% of operations had capacities of under 0.3 Mt/y, which were characterised by low productivity, low utilisation rates and high costs. The Chinese government has implemented a number of policies in the last couple of years to address the structural oversupply in the domestic coal industry, while also attempting to improve the long-term competitiveness of the sector. The closure of small and inefficient mines, as well as the start-up of new, large scale, highly-productive operations has been an important focus of the government’s attempts to restructure the sector; the National Development and Reform Commission (NDRC) has targeted the closure of 800 Mt of high-cost coal capacity and the start-up of 500 Mt of new, low-cost capacity by 2020.

China is the clearing market for seaborne coal, as buyers take advantage of the arbitrage opportunities between the domestic and seaborne markets and, therefore, the outlook for Chinese coal costs is an important determinant of medium-term thermal and metallurgical coal prices. Based on site visits and drawing on our broader contact with market players, this CRU Insight provides an outlook for Chinese thermal coal Business Costs in the medium-term.

Capacity closures are ahead of schedule
The NDRC achieved its annual capacity closure target of 290 Mt in 2016 and, at the start of 2017, it outlined plans to close an additional 150 Mt by the end of the year. However, the annual target has since been lifted to 200 Mt and, by the start of September, we understand that ~170 Mt of capacity had been closed. As such, the government is on track to meet the overall closure target of ~800 Mt by 2020.

The following chart illustrates the average thermal coal Site Costs of each coal-producing province and the number of coal mines that are expected to have been closed by end-2017. As expected, the closures have been more prevalent in regions that have the highest production costs; for example, the prefecture of Chongqing and the provinces of Jiangxi and Hunan are, on average, the highest-cost regions and, as a result, have seen the largest number of mine closures. There have been a larger number of coal mine closures in the South of the country, although operations in the Southern regions are typically small and, overall, the volume of capacity closed is less than in many Northern regions. For example, there has been a bigger volume of capacity closed in many of the larger coal-producing provinces, such as Shanxi and Inner Mongolia. By end-2017, the Chinese government is expected to have closed 500 Mt of the 800 Mt target and we expect the full target to be met by 2020 given the progress to-date. Indeed, our discussions in China suggest that enforcing closures effectively has become an important indicator of ‘success’ among local officials.

Production is shifting to new, low-cost regions
CRU estimates that 109 Mt of new capacity commenced production in 2016 and we forecast that 96 Mt of capacity will come online in 2017. The commissioning of new capacity will result in production shifting to newer, lower-cost mining regions. The majority of the new capacity is being developed in the Western provinces of Inner Mongolia, Shaanxi and Xinjiang where coal reserves are abundant, mining conditions are favourable and there is potential for the construction of large-scale, low-cost mines.  For example, thermal coal cash costs at new mines in areas of Inner Mongolia and Xinjiang are typically $10-20 /t and these will effectively replace mines in Jiangxi and Anhui, amongst other provinces, where Site Costs can be as high as $80 /t. 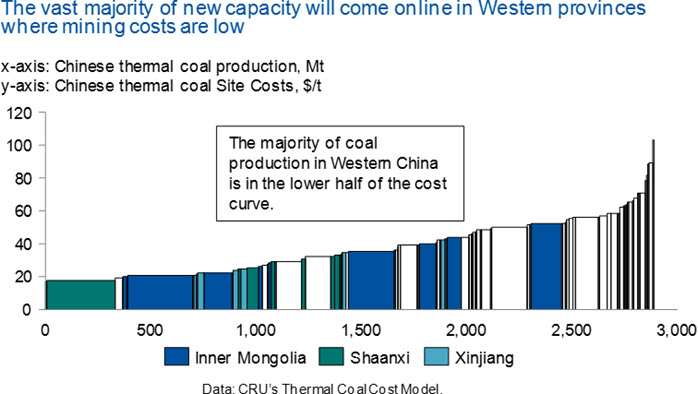 The restructuring will partially offset cost inflation
Much like the rest of the coal industry, Chinese producers responded to the prolonged market downturn during the 2012-2016 H1 period by minimising costs; for example, staff were let go on a huge scale, salaries were slashed by up to ~50%, investment in spares and parts fell and purchases of consumables collapsed. Our recent research shows that much of the cost-cutting that took place in China while prices were falling was unsustainable and, since prices have rallied, costs have risen once again (n.b. albeit from an artificially low base). Analysts in CRU’s Beijing office estimate that unit costs at operations producing largely coking coal have increased by ~30-70% in local currency-terms from the low point just prior to the implementation of the ‘276 working days’ policy in April 2016. Coal companies have back-paid staff and increased salaries, royalties are higher with higher coal prices, spending on mining spares and parts has increased, while the interruption and resulting lower production following safety inspections has increased unit costs.

Moreover, as international prices revert towards more sustainable levels (i.e. relative to costs), cost control will become increasingly important in the industry. Our view, and one that is supported by recent discussions with Chinese coal producers, is that average costs at operating mines are likely to increase in the medium-term. Underpinning this view is our expectation that salary growth will be strong, there will be increasingly challenging geological conditions, such as increasing mine depths, while yields will worsen at many operations. Furthermore, CRU’s Economics Team forecasts that the Renminbi will strengthen to 6.35 RMB:USD by 2021, which will increase Chinese costs in USD-terms by ~7% compared with 2017 levels. Nonetheless, the rationalisation of higher-cost capacity, start-up of low-cost capacity and improvements to mining technologies are expected to partially offset more general upward cost pressures. As a result, Chinese Business Costs are forecast to increase at a slower rate than seaborne producers outside of China in the medium-term; Chinese thermal coal Business Costs are forecast to increase at CAGR of 2.4% in real terms between 2017 and 2021, compared with an increase of 3.2% for seaborne producers elsewhere.

As shown in the following chart, CRU estimates that the Chinese marginal cost level is unlikely to rise despite the increase in average costs, as approximately half of the operations in the fourth quartile will be permanently closed and replaced by lower-cost mines, as part of the government’s restructuring plans. This is important because the government’s supply-side policies are expected to eliminate structural overcapacity, supporting a balanced market in the medium-term and, therefore, coal prices are expected to be set by marginal Chinese production costs.

Conclusion
Improving the competitiveness of the Chinese coal industry is a key aim for the government. In that regard, older, higher-cost mining capacity is being replaced with greenfield operations located in new mining areas. Our view, based on primary research and economic modelling is that cost inflation will return to the Chinese industry, as profitability improves and as the cost reductions that have occurred in recent years are reversed, however, restructuring will partially offset this. Chinese thermal coal Business Costs are forecast to increase at CAGR of 2.4% in real terms between 2017 and 2021, which is a slower rate than the cost inflation forecast for seaborne thermal coal producers outside of China. However, we forecast that the 90th percentile of the Chinese thermal coal Business Costs curve (i.e. the operations that will set prices in the medium-term) will remain around current levels. 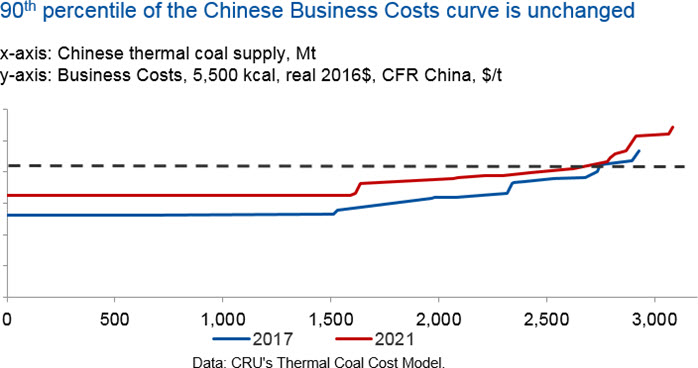