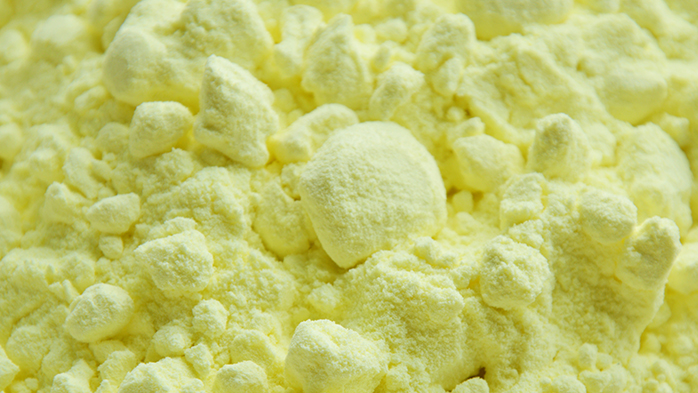 Sulphur is increasingly being recognised as the fourth major crop nutrient alongside N, P and K. The introduction of modern agricultural practices, high analysis fertilizers and tighter environmental regulations has led to an increased occurrence of sulphur deficiency in soils.


This CRU Insight looks at the reasons behind the increasing trend in sulphur deficiency and whether there is a gap in the market which could be filled by sulphur fertilizers.

Organic sulphur, which accounts for 95% of the nutrient in soil, must be oxidised into the sulphate form to allow plant uptake. Inputs from the atmosphere and fertilizers add to the mass balance. 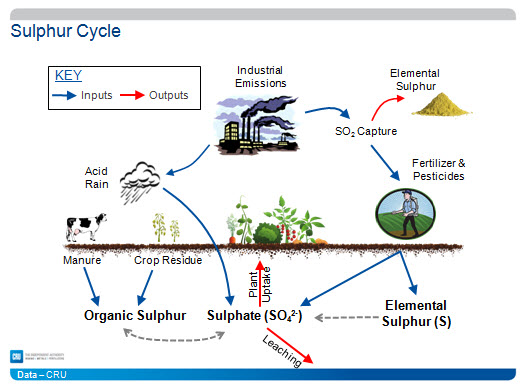 Sulphur Deficiency
In the past, little attention was paid to the application of sulphur nutrient because soils had abundant natural supply. In recent years, the worsening of crop quality and yields has increasingly been attributed to sulphur deficiency. The actions that have led to this situation include:

Falling SO2 Emissions
Tight emissions controls have reduced the amount of SO2 entering the atmosphere and being deposited as acid rain. Europe and North America were the first to tackle emissions in the 1980's, with the rest of the world now looking to implement similar policies. 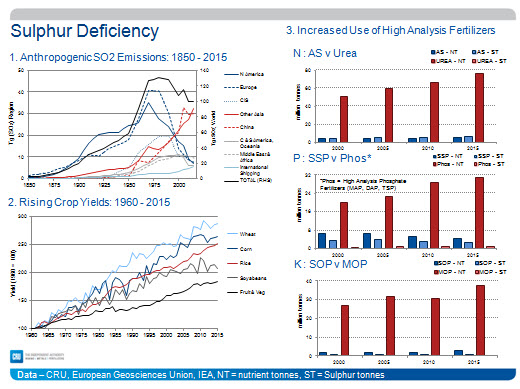 SOP is prized for its chloride free content, which is necessary for certain high value crops; however, it is only commands a small market share relative to MOP. Since 2000, Chinese SOP demand has grown considerably, while demand across other regions has remained flat.

At the start of the decade, NP+S emerged as a new sulphur fertilizer with strong demand in India, Brazil and the United States, with additional demand in Ethiopia and Australia. Other sulphur-based fertilizers include: gypsum, which has traditionally been applied in Brazil, where it is obtained as a by-product from phosphate fertilizer production; and sulphur bentonite, which has been designed specifically to help combat sulphur deficiency in countries like the United States and India. 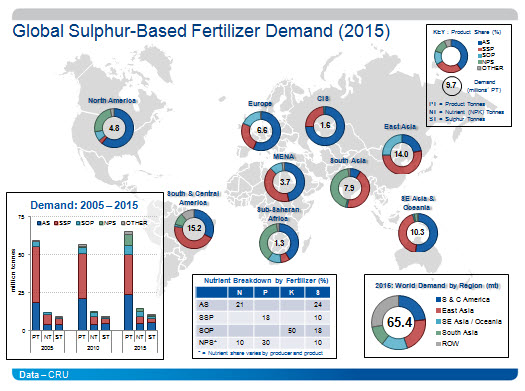 Crop Sulphur Demand & Deficit
Crops use sulphur to produce essential amino acids, proteins, oils and other inorganic compounds; with sulphur being especially important in the initial growth stages. Sulphur demand varies by agricultural crop type; for example a low intensity grazing operation will typically require only 5-10kg S/ha, where as a more demanding crop from the brassica family may require up to 10 times this.

The following demand assessment is generated by multiplying crop areas by, region and crop specific, sulphur requirements to forecast sulphur demand over the outlook. Fundamental crop requirements for sulphur are forecast to exceed 24 million tonnes by 2020; with current fertilizer application only half this requirement. India, Africa and the CIS are expected to have the largest deficit, but all regions have noticeable deficits.

In parts of the developing world, high sulphur emissions will help fill some of the gap in sulphur demand. However, sulphur nutrient deficits will still be encountered in agricultural areas located far from industry. Crop demand will also be affected in extreme climatic regions where high sulphur losses from the soil are often sustained. 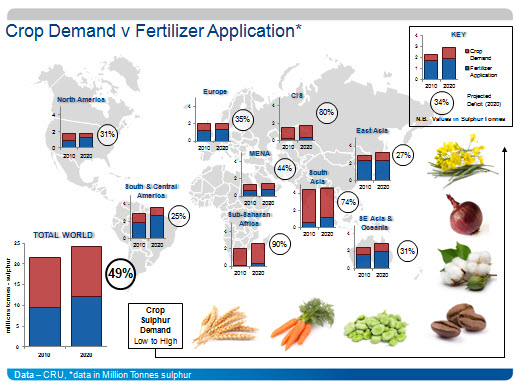 Prospects for Sulphur Demand
As the world continues to reduce sulphur emissions the demand for added sulphur in agriculture will increase. Traditional sulphur based fertilizers (AS, SSP) are not expected to fill the demand gap, however, sulphur enhanced fertilizers, which either coat or incorporate sulphur into the matrix of high-analysis fertilizers, are expected to grow as an industry and become more popular.

Sulphur deficiency cases are being increasingly recognised across the world but demand for sulphur fertilizers has been slow to respond. However, at the point which crop yields are significantly impacted; demand for new sulphur enhanced fertilizers could increase rapidly.

Conclusion
Sulphur is one of the key nutrients required in crop production. Changing agricultural practices and new environmental regulations have caused sulphur levels in soils to fall quite significantly. Cases of sulphur deficiency are becoming more widespread and have affected the quality and yield of certain crops more than others. The deficit is only expected to grow over the near term; however so will fundamental demand. This will continue to incentivise investment in sulphur enhanced fertilizer technology where there is expected to be strong demand in the future.