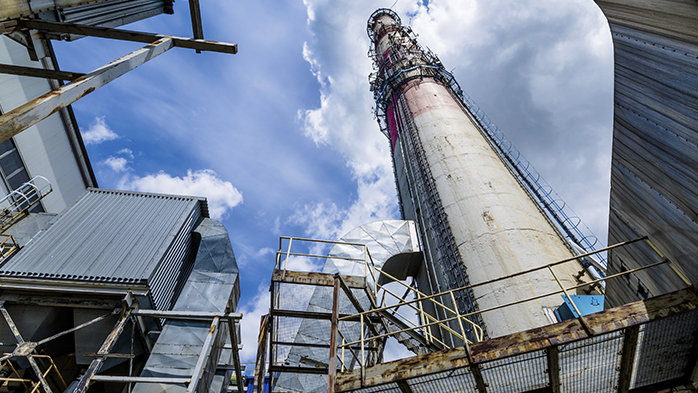 Of all the major commodities, it could be argued that thermal coal currently faces the greatest downside, structural risk to demand in the next 10-20 years.  The Paris Agreement, which has been ratified by over 70 countries that contribute to ~57% of global greenhouse gas (GHG) emissions since it emerged in late 2015, undoubtedly has negative consequences for thermal coal demand in the medium- and long-term.


While we can make that statement with certainty, there is far less certainty around how significant the changes to the "business as normal" trajectories for countries' energy use and mix will be, or how the burden of forced change will be shared amongst countries and sectors.  Moreover, while the Paris Agreement states a commitment to reduce GHG emissions to levels believed to be consistent with holding global temperatures to within 2° of pre-industrialisation levels (n.b. also known as the 450 scenario), the sum of current emissions targets that countries have set themselves (n.b. also known as intended nationally determined contributions or INDCs) is considerably higher than global levels necessary for the 450 scenario.  At this stage, policies, targets and market mechanisms are, in CRU's view, insufficient for the 450 scenario to be achieved by 2030.

In CRU's latest Thermal Coal Market Outlook, we have extended our forecast period out to 2035 and incorporated forecasts for CO2 emissions by different sectors (e.g. power generation, transport, etc) consistent with our projections for primary energy demand and electricity generation by the different sources of fuel.  Using coal supply and cost information from September's Thermal Coal Cost Service, we have then been able to forecast thermal coal prices in the long-term (i.e. out to 2035).  This base case is the one we deem most likely to occur, however, it is not one that results in CO2 emissions consistent with the 450 scenario.

In order to achieve this scenario, a very significant diversion from our base case is required and not just in the power sector.  For instance, under our base case forecast for primary energy demand the 450 scenario was unachievable, even if all coal power plants were replaced by zero-carbon fuel sources by 2030.  Understandably, the coal sector receives a lot attention when it comes to reducing CO2 emissions, however, our analysis shows that if the 450 scenario is to be met, in the first instance, a colossal step-change in the relationship between economic development and energy efficiency will be required.  We would argue we have already allowed for significant improvements in energy efficiency in our base case forecast and, therefore, the scenario presented here is unfeasible given our economic forecasts.

Nonetheless, should global energy demand end the next decade at the levels presented in the accompanying chart, be it through a step-change in energy efficiency and/or a huge underperformance in economic development, the 450 scenario could be achieved. However, it would still require a very dramatic shift away from coal in the power generation sector, shown in the chart below. 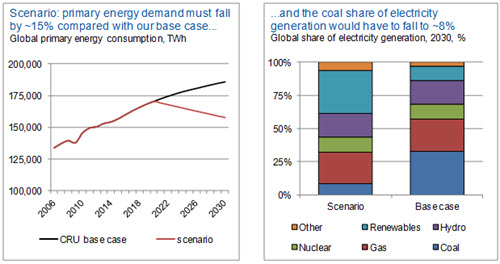 Today, we estimate that 38% of global electricity is generated using coal and, based on current policies, we believe this will fall to ~33% by 2030. The US, Europe and China are reducing their reliance on coal, however, rapid economic development in South East Asia and India is largely being supported by electricity generated from coal. However, under the aforementioned low case for energy demand, we estimate the global coal share of electricity demand would need to fall to ~8% by 2030 and be replaced by zero-carbon sources such as renewables and nuclear. The resulting decline in thermal coal demand (n.b. ~8%/y from 2016-2030) would, obviously, cause prices to be significantly lower than those expected in our base case.

Of course, this is just one of many possible outcomes. Technological progression in areas such as carbon capture and storage is inherently difficult to predict, but could have a massive influence on energy markets and CO2 mitigation. The same statement could be made on political leadership.

For this reason, the best way of planning for the impact of CO2 mitigation is through testing strategies across different scenarios. CRU's Consulting Team has the proven capability to help by quantifying the implications of a variety of scenarios, whether they are policy and technology, or supply and coal quality related. We have coal and energy industry experts that know the producers, customers, markets, cost drivers and key risk factors in thermal coal market. Our team is well placed to advise on thermal coal market decisions and, as always, we remain independent and bankable.

2021 will be a year of hope for recovery after the coronavirus pandemic left its mark on the world in 2020. Monitoring the speed and nature of the recovery will be vital...