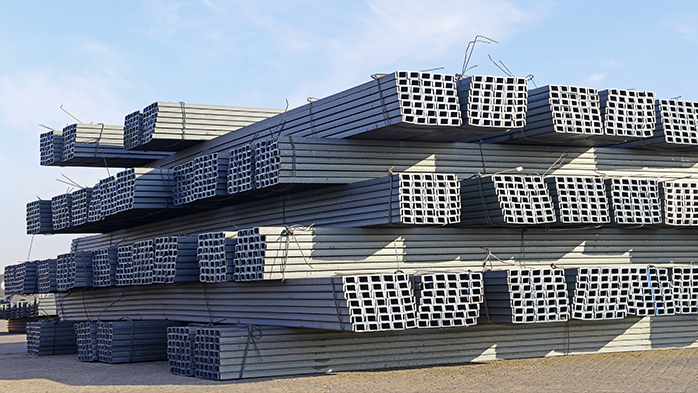 Over the past three months, the Indian government has taken swift action in utilising the period of implementation of the Minimum Import Price (MIP) to replace it with anti-dumping duties on imports of specific steel products from a select set of exporting nations.


The prime motive here is to replace MIP (considered an emergency trade protectionist measure) with a sustainable, long-term trade barrier given rising criticism from the global trade community in response to MIP, especially countries with which India has trade partnership agreements.

Latest update on the imposition of long products-related trade barriers in India
In the Indian steel market, the MIP on imports has been extended two times since the initial date of expiry of 4th August 2016. Phase I of MIP, which lasted from 5th February to 4th August 2016, applied to products under 173 HS codes. This list was pruned back under Phase II, which lasted from 5th August to 4th October, to 66 steel HS codes. The revised list, however, continued to include steel long products such as billet, bloom, bar and rod. In October, the government decided to extend Phase II by two months to 4th December 2016. Concurrent anti-dumping and safeguard duty investigations are ongoing for most of the steel products covered under MIP protection. 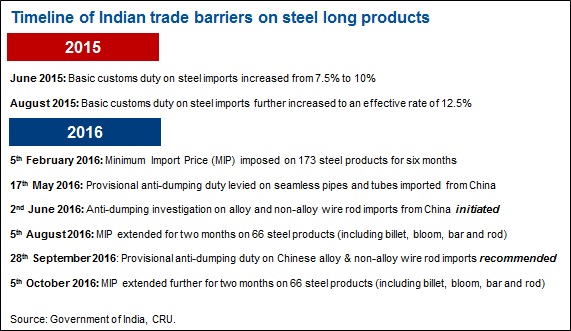 Effectiveness of trade protectionist measures and their impact on local longs prices
As can be seen in the chart that follows, trade protectionism in the form of MIP has proven to be quite effective in curbing imports of finished steel products in India, although the policy has faced a lot of criticism in the global trade forums.  This trade barrier allowed Indian steel producers to hike domestic steel prices in the first three months of MIP imposition.  For steel long products specifically, MIP particularly impacted imports from China, which accounted for around 70% of Indian steel long products imports as of 2015.

While imports have fallen, the growth rate of domestic market demand has also been slow.  This resulted in low offtake from end users in June and July, thereby forcing local producers to roll back most of the price increases made earlier in an attempt to benefit from MIP.  Nonetheless, since mid-Septmber, construction demand has started to revive, given that the monsoon season has ended.  At the same time, seaborne coking coal prices rose abruptly following China's announcement of coal production curbs and supply bottlenecks in Australia.  These two developments, in addition to trade barriers that are in place in the form of MIP and anti-dumping duties, have allowed Indian mills to achieve further rounds of price hikes in the months of September and October. 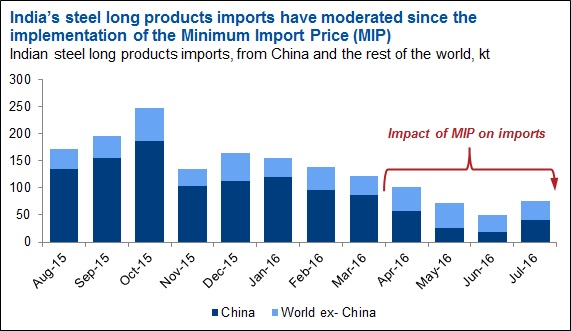 CRU understands that the latest round of price hikes in October is not sustainable, given resistance from various consumer associations.  Even for the anti-dumping duty recommendation on wire rod imports from China, the government has received strong opposition from the Steel Wire Manufacturers Association of India, who argue that domestic output and tha available range of wire rod products is not enough to meet their requirements.  It was due to this (and similar) opposition that the government has bought more time to assess the implementation of an anti-dumping duty on wire rod by extending MIP until 4th December 2016.

Upcoming policy changes could considerably change the import profile of long products in India.  We will continue to monitor the situation around the Minimum Import Price and potential anti-dumping duties, and will discuss the likely consequences of any changes in upcoming editions of the Steel Long Products Monitor.