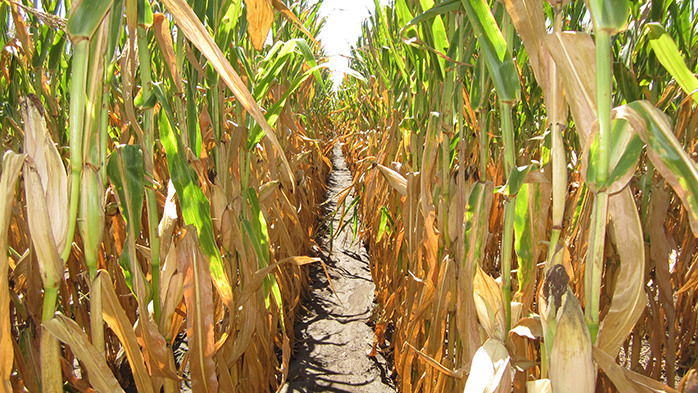 
CRU recently attended the 2017 Pro Farmer crop tour through the western US Corn Belt to better gauge prospects for 2017 crop yields and production, and the implications for 2018 fertilizer affordability and demand.

Overview of the crop tour
The 2017 Pro Farmer crop tour took place over August 20-24 with the aim of assessing production and yield potential of corn and soybean crops in the US Midwest, collecting corn samples and soybean pod counts to help determine potential output.

The seven states visited included South Dakota, Nebraska, Iowa, Minnesota, Ohio, Indiana and Illinois, with tour scouts split into two groups covering eastern and western routes. The states sampled account for around 60% and 50% of the US total harvested area of corn and soybeans respectively, highlighting the vital role the Midwest plays in crop production. 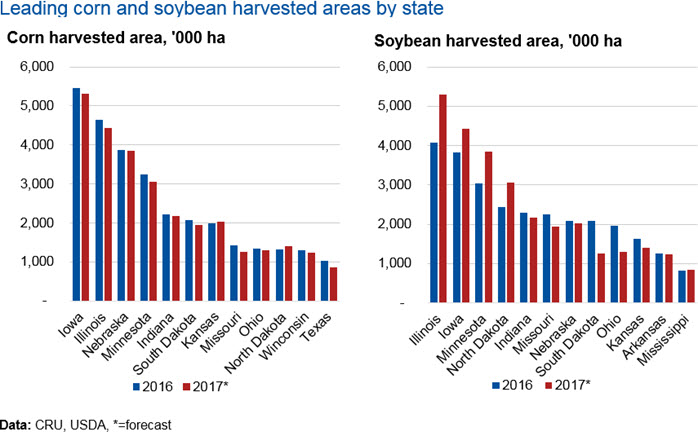 Prospects for 2017 harvest and implications for crop prices
Heavy spring rainfall throughout the eastern Corn Belt led to fields being replanted (for some fields, multiple times). Conversely, crops in the western Corn Belt suffered from drought stress throughout July, effecting early crop growth. Despite this, late August rains have boosted crop conditions across the country, resulting in extreme variability in crop conditions.

Despite this variability, production prospects are looking good with yields expected to be fractionally lower than the record highs set in 2016. The USDA is forecasting US 2017 corn output at 360 million tonnes, based on average yield of 10.6 t/ha, which would be the third highest output on record. Forecasts for soybean production suggest a record crop this year. The USDA estimates US 2017 soybean output at 119 million tonnes, based on an average yield of 3.3 t/ha. For both corn and soybeans, Pro Farmer estimates for US production and yield potential are marginally lower than the USDA figures. 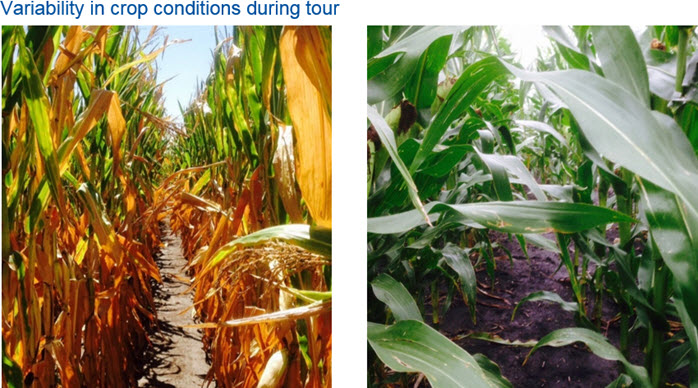 In the Corn Belt, heavy rainfall during spring and drier growing conditions in July led to price volatility, underpinning spikes in corn and soybean values. Drought stress had been expected to bring a sharp downward revision to yield and production forecasts, supporting crop prices. However, prospects have since improved, as demonstrated by USDA data, with some yield estimates taking the market by surprise. This, paired with excellent production prospects in the rest of the world and a large stock overhang, has resulted in continued downwards pressure on prices.  With good yields expected from the US and record safrinha (second crop) production from Brazil, corn prices are forecast to fall over the short term.  Soybean prices are expected to move lower over the coming months as farmers in Brazil increase planted area again, while farmers in the US reap another large crop. 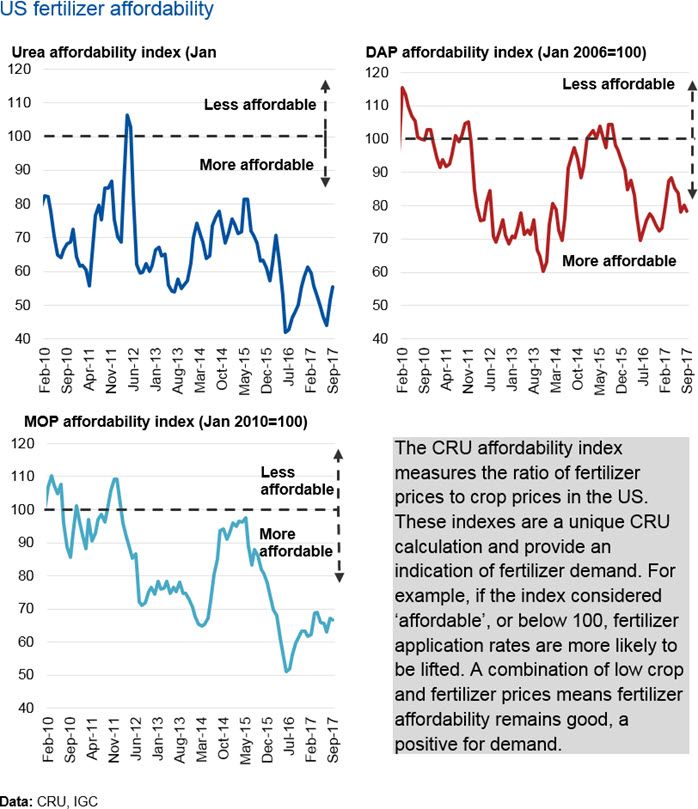 Although crop prices persist at low levels, US fertilizer demand remains strong, underpinned by low fertilizer prices. There is limited upside for fertilizer prices over the coming 12-18 months due to increasing global supply, which should help maintain strong affordability levels.

As a result of strong crop production in 2015, 2016 was one of the best spring fertilizer application seasons on record. 2017 fertilizer demand is estimated to have fallen slightly, owing to the aforementioned variable crop conditions and increased plantings of soybeans over corn, which are less nutrient-intensive. Fertilizer demand for 2018 crops is expected to be aided by strong affordability levels, and another year of high yields will mine more nutrients from the soil.

According to one-on-one conversations during the crop tour, farmers were driven to plant more soybeans in 2017 because of a higher price ratio relative to corn and lower costs of production associated with the crop. There was further anecdotal evidence that lower fertilizer prices have supported nutrient demand and boosted farm margins.

Low prices have been particularly helpful for phosphate and potash consumption. These nutrients have more demand elasticity and can often be cut if fertilizer prices are too high and crop prices are too low. Farmers mentioned they rarely cut back nitrogen applications even if farm margins are tight, as they look to fulfill yield potential with nitrogen side-dress applications.

The outlook for 2018 fertilizer demand
Many in the market feel it is too early to comment on the outlook for next year’s crop. However, looking forward to 2018, CRU feels there is more upside for corn plantings with area forecast to increase 3% y/y to 35.3 million hectares. Soybean area is forecast to fall 1.2% y/y in 2018, but will remain relatively high following record planting in 2017.

With soybean planted area again expected to expand sharply in Brazil and record production forecast in the US, price ratios are likely to favour corn planting in 2018. History shows planting behavior is highly sensitive to this price relationship. A shift towards corn planting and a continued low-fertilizer price cycle is anticipated to support fertilizer demand in 2018, as the diagrams below demonstrate. 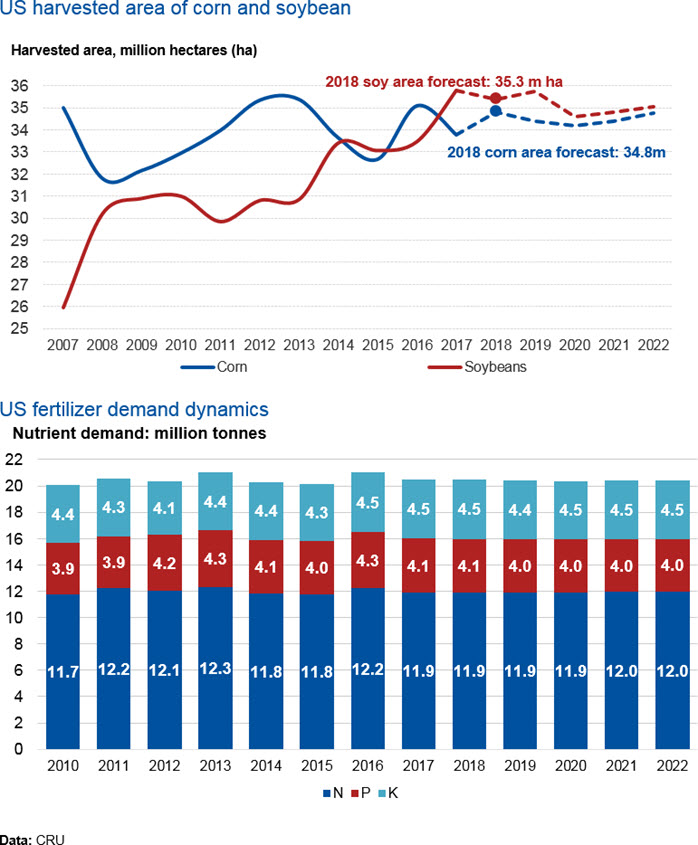