Who will claim the Copperbelt? 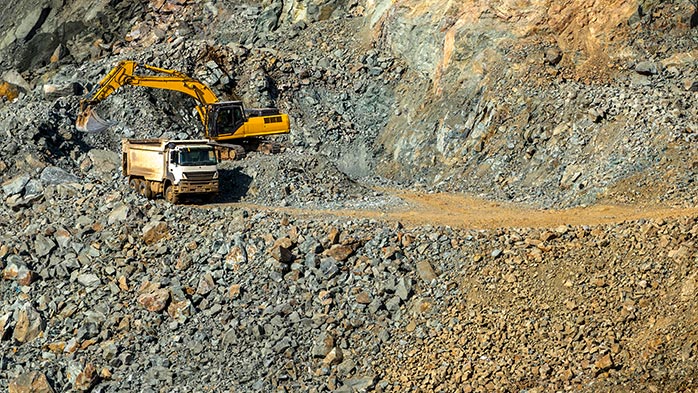 The explosion in EW mine production in the DRC over the past decade has helped the country to claim the title of Africa’s top copper producer, while production in Zambia languished under poor governance.


Both sides of the Copperbelt covet this title and have set bold targets to achieve it, but hurdles must be cleared first. Chief amongst them; can the DRC achieve a peaceful transition of power at the elections in December?

Rising from the Ashes
African copper production fell sharply in the second half of the last century while the Copperbelt was under state control. However since the major privatisation initiatives of the 90s and peace being signed in the Congo; production has been able to recover, spurred on by strong Chinese demand.

From 2004-2010, African copper production grew by 14% (CAGR), from 0.59Mt to 1.31Mt. Over that period Zambian production doubled from 0.34Mt to 0.70Mt as Kansanshi and Lumwana joined KCM and Mopani in operation,while the DRC’s production quintupled from 0.08Mt to 0.41Mt as Tenke, Kamoto and Frontier came online.

However since 2010, Zambia has been adversely affected by inconsistent policies and changing tax regimes which has deterred investment and stemmed production, while the regulatory environment in the DRC has remained both competitive and stable, allowing EW production to explode. Since 2010, Mutanda, Kinsevere, Sicomines have all commisioned in the DRC pushing total copper production past Zambia and into the world’s top 5 with over 1Mt/y. 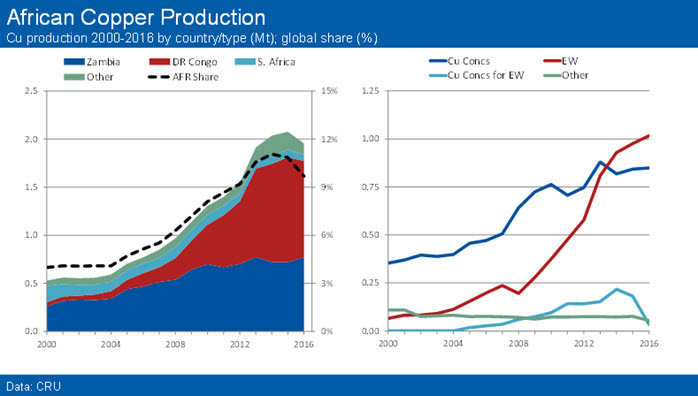 Staking their claim
The Zambian government has woken up to the situation and recognise that indecision and  mismanagement has cost the economy. Subsequently after a period of more open consultation with the chamber of mines, the government has moved to a sliding royalty rate (4-6%) which is based on the copper price. It has also commited to improving infrastructure and to finding a long term solution to the 750MW power deficit, starting with the Kafue Hydro Project and the Maamba Coal-Fired Power Plant. Zambia is expected to produce 0.84Mt in 2017 and pass 1Mt/y in 2019 with Sentinel and KCM driving growth. 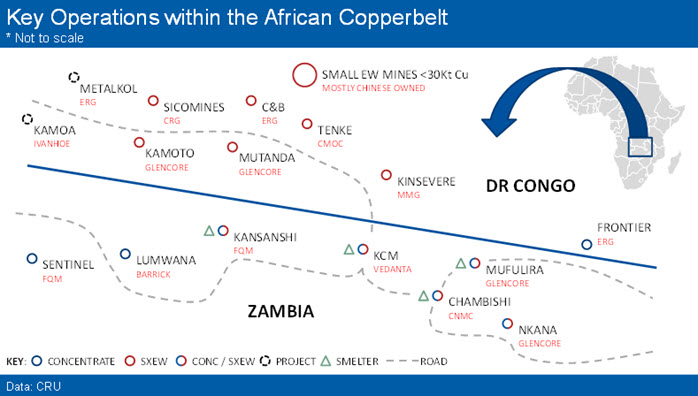 Teetering on the brink…
While Zambia is looking to improve its investment proposition, the DRC is doing the opposite at a time of political uncertainty. Firstly it is trying to reform the mining code which has stood since 2002. Efforts were made in 2015 to introduce this bill, but a decline in commodity prices and uproar from the mining industry saw it withdrawn. However, with copper prices now back up in a range of ~ $5,500-$6,000; the government is keen to re-introduce this bill which would increase royalties from 2% to 3.5%; corporation tax from 30% to 35%; and the government’s free share on new mining projects from 5% to 10%.

More importantly, the people will go to the polls once again this December after the democratic system failed last year. The DRC has yet to have a peaceful transition of power and Kabila, who was supposed to stand down last year, has already responded with violence. Since then, Kabila has agreed to stand down at the end of 2017 and a transitional government has been put in place. It is unlikely that the political situation in the DRC will develop into militarised conflict, but the chances of protests and violence are  high. If this spills into the Katanga mining region, then production will be impacted for as long as it ensues. Even if Kabila does stand down at the end of this year, the transition will be bumpy, and until the dust settles and the new policies are ironed out; the DRC will remain a risky investment proposition.

…or poised to explode
It is important to consider the alternative; and that is if a peaceful transition brings in a strong government that invests in infrastructure, then copper production will accelerate. The DRC already has many world class mines, but it also has a lot of exploration potential exemplified by the rising star that is Kamoa. On paper it has the resources to retain the crown that it claimed in 2013. However if the political situation breaks down later this year, then expect to see a charge from south of the border.