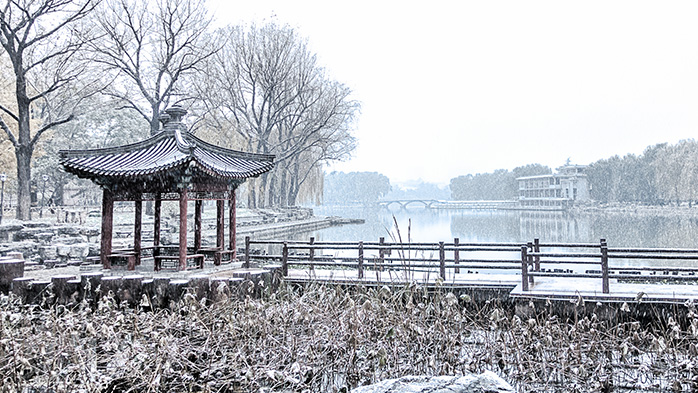 The winter policy will require capacity cuts in the raw material sector, most notably for producers of carbon anodes and petroleum coke.  Which market will be affected more?  Will this lead to a raw material shortage?


With winter curtailments upon us, many questions remain regarding the availability of petroleum coke and carbon anodes. Despite the uncertainty, one thing remains obvious; the Chinese government is taking action to clear up one thing, the sky. The winter season in China is a time when pollution becomes a large concern as coal-fired power plants run harder to provide additional power for heating. Add this to the base line pollution from the industrial sector and you have a situation that requires action.

Roughly 2 million tons of primary aluminum capacity will be impacted by the winter cuts, translating to nearly 840,000 tons of production cuts in Q4 2017 and Q1 2018 combined. But the impacts will not end here as the winter policy will also require capacity cuts in the raw material sector, most notably for producers of carbon anodes and petroleum coke. But which market will be affected more? Will this lead to a raw material shortage? This insight focuses on the potential impacts of the winter curtailment policy on the carbon anode and petroleum coke markets in China.

What is the winter curtailment policy and what does it mean to carbon producers?
The winter curtailment policy was put in place by China’s central government and will run from November 15th through March 15th. In order to remain operational, carbon factories must meet special emission standards of 15mg/m3particle, 100mg/m3 SO2, and 100mg/m3 NOx. The policy will look to curb carbon emissions by implementing one of the following actions:

Which regions of the country are impacted?
The impacted areas have been dubbed the “26+2 cities”. In addition, several provincial and local governments have made decisions to extend this policy to include other cities, thus further spreading the impact. At this stage, 2 municipalities and 36 cities are covered by the policy.

What is known thus far?
Local governments and primary aluminum producers took early action to announce smelting cuts providing clarity to questions that clouded the market earlier in 2017. However, this has not been the case in the carbon market, with many left wondering just how severe the cuts will be. It is not a complete black cloud as some have stepped up to provide the clarity that the industry desperately seeks. Early in October, the Henan provincial government published a list of all carbon facilities that will be subject to winter closures. This list included 12 calciners and 23 anode factories, specifying which needed to curtail by 50% and those that would be completely shuttered. 10 of the 12 calciners, with a combined total capacity of more than 600,000 tons, were issued a notice to shutdown due to not meeting the special emissions standards. 10 of the 23 anode factories, with a combined total capacity of more than 1.2 million tons, were also issued a notice to close. Other provincial and local governments have come forth announcing the policy and stating the number of impacted factories, but have not been as clear as to provide a detailed list of the individual factories.  This has made it tough to estimate what the full extent of the policy will be on the petroleum coke and carbon anode markets in China.  As it relates to coal tar pitch, we do not anticipate any major changes in output since coal tar distillers are not subject to winter cuts.  However, with coking batteries at risk of curtailments the supply of coal tar to the distillers will be impacted, but it’s not clear whether that will lead to higher coal tar pitch prices, or if the reduction in pitch demand from anode producers will be enough to offset the increase in costs.

CRU assumptions of impacted capacity and production loss
Of the nearly 5.5 million tons of calcined coke capacity and 8.7 million tons of anode capacity at risk of closure, more than 50% of this is located in Shandong, a province which has yet to come forward with specific details. As such, assumptions must be made to determine just how severe the cuts will be in Shandong, and in China as a whole. For Henan we have estimated the impact using the announced cuts, and for the other provinces we have assumed a 50% curtailment in absence of any concrete information. 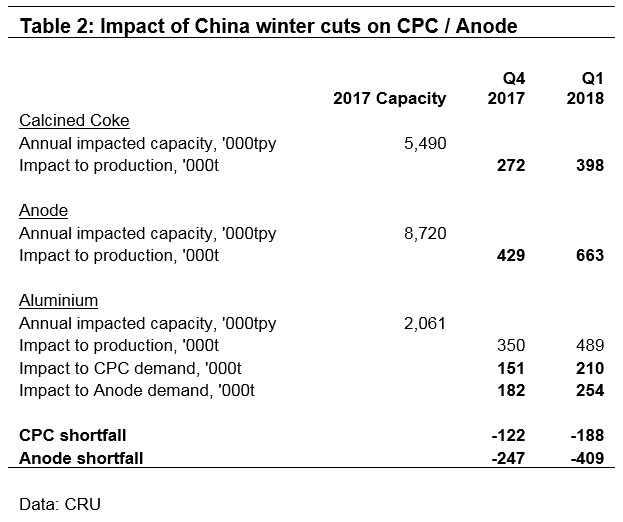 The impact to supply of calcined coke and anodes will be more severe than the impact to smelters, thus creating a shortfall in supply in Q4 2017 and Q1 2018. As such, CRU expects a reduction in exports and higher prices over the next several months.

What does this mean to the global aluminum market?
The global aluminum market has become extremely dependent on Chinese supply of both petroleum coke and anodes over the past two decades as China’s capacity has grown rapidly. As such, large reductions in output for these products will have affect raw material supply chains, particularly for the Middle East, which sources nearly 40% of its carbon requirements from China. Despite the massive increase in Chinese exports of calcined coke and anodes that has taken place since 2000, as shown in the below chart, export volumes in 2017 have begun to taper off. Through September, exports of calcined coke are off 28% from 2016 levels with September alone posting a 44% drop from the prior month and 76% drop from levels a year ago. We believe this is a direct result of Chinese domestic smelters pre-buying in advance of the upcoming winter season, leaving less volume available for exports. 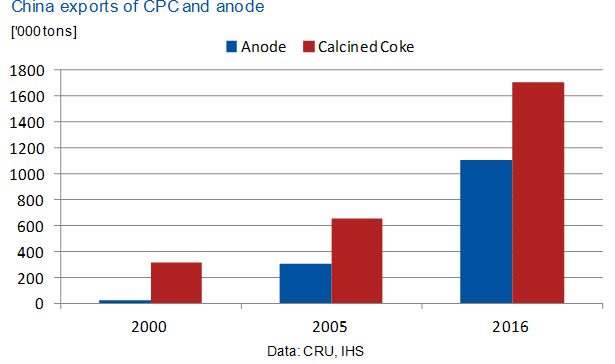 Conclusion
The market is not yet clear on whether this policy will be a structural shift or just a one-time event. Assuming it continues every year, one can expect factories to push production higher in advance of the winter season in an effort to build stocks and/or satisfy a surge in orders from smelters that are looking to secure supply. This could lead to extreme price volatility and further encourage international aluminum companies to look elsewhere for raw material supplies. But where will the market turn? Considering that China accounts for 90% of the world’s 3rd party anode capacity, there are very few alternatives for those who are dependent on Chinese anodes. And for those who are manufacturing anodes using Chinese calcined coke, alternatives are also limited as utilization rates approach peak levels. We do not believe that the primary aluminum industry will be forced to shut capacity due to raw material shortages, but we certainly see the potential for price volatility and tighter carbon markets going forward.

You may also be interested in this CRU Spotlight: