In December 2017, we surveyed our clients as to their views on the global economy. With Q2 2018 now in full swing, we decided to revisit the survey to see how things have turned out thus far in 2018.

Distribution of survey respondents
CRU Economics collected responses from 375 clients located in 60 countries. The results are aggregated into 6 broad industry categories and 4 geographic regions, as shown in the charts below. 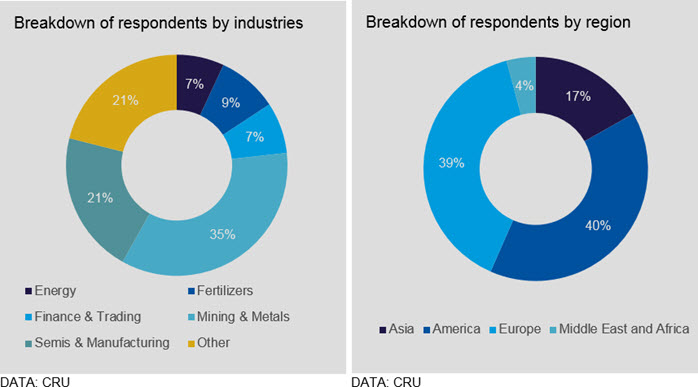 The highest frequency responses showed a remarkable level of consensus across our client base.

In 2018, global growth a little faster, no recession likely
CRU’s base case forecast for global GDP growth is for 3.2% this year, up from 3.1% registered in 2017. This remains in line with the majority of our survey respondents, who expected growth this year to be a “little faster” than in 2017.

There were several sources of growth in 2017. China’s government upheld stimulus ahead of the Party Congress in October. Fading political risks in the Eurozone led to an investment boom in the region. The expectation of tax cuts and less regulation resulted in strong investment and consumer spending in the US. In addition, the synchronous growth in the world’s three largest economies prompted a upturn in global trade. Some of this momentum has carried into 2018. China’s policymakers have stated they are ready to allow slower growth but, so far, the economy is still expanding on par with 2017 levels. Whilst activity in the EU has likely peaked, we do not expect a significant deceleration in activity this year. In the US, the momentum which was building in H2 carried into Q1, so investment spending remains strong, consumer confidence is high and the housing sector continues to rebound.

For all of these reasons, CRU concurs with our clients that a recession in 2018 seems very unlikely. That said, the risks noted by our clients for this year (see next section) could be a catalyst to recession in the years to come.

Chinese growth, US policy remain key risks to growth
Our clients cited the speed of Chinese economic growth as the key upside and downside risks to the global economy. The early data for China’s economy show a strong outturn thus far in 2018 so the potential exists for China to outperform our base case forecast.

The second key risk cited was US policy, encompassing both US fiscal policy as an upside risk and trade protectionism as a downside risk. In addition, global trade itself was cited as a potential downside risk for 2018 given that it had contributed so much to growth in 2017. 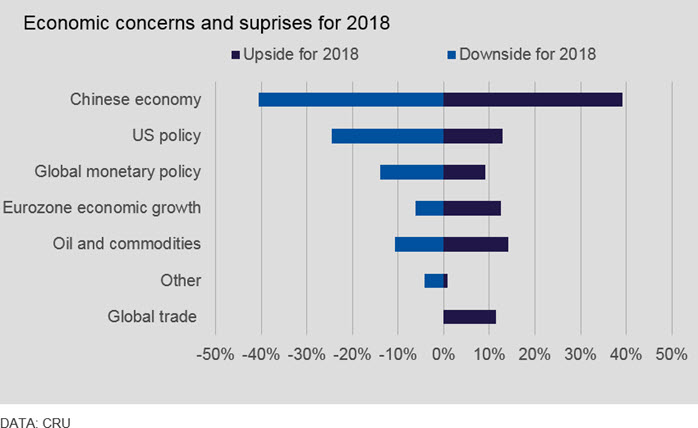 When we conducted the survey, the US tax cut was not yet implemented, but anticipation of the corporate tax reduction certainly provided upside momentum to the economy in Q1 via higher investment outlays. The effect of lower individual taxes on consumer spending is not yet clear, but with the labour market so tight, and wages rising, the reduction in personal taxes should, at the very least, support consumer spending at last year’s level.

US protectionism has surely emerged a key concern for the downside. US trade policy has been a focal point of much of CRU’s work since tariffs on steel and aluminium imports were announced in March and the US proposed tariffs for $150 bn of Chinese goods for unfair practices regarding intellectual property. A new agreement on NAFTA is also a question mark as we await further progress.

Our clients noted several other issues worth watching. The unwinding of quantitative easing measures worldwide is proceeding as expected, with the Fed raising interest rates, the Eurozone gradually exiting QE and Japan unlikely to make any major change this year. Since Eurozone growth was such a positive development in 2018, concern that its economy would slow faster this year presented a downside risk for our clients. As we noted above, however, Eurozone economic growth has likely peaked but we do not see a significant deceleration ahead for this year.

The price of oil and commodities has suddenly become much more of an issue given that Brent crude oil is trading above $75/bbl and is at its highest level since November 2014. We will explore the oil price further since it was its own topic in the survey.

North Korea less of a risk today
We asked clients about their views on geopolitical risk and, in December 2017, the conflict between the US and North Korea was cited as the most harmful issue facing the world economy. This view was prominent across all industries, ranging from 43% in the financial sector, to 58% in energy sector. Of the other choices in the survey, Brexit was the next largest concern. However, it is worth noting that, while various geopolitical risks remain, in general, economic uncertainty has reduced. 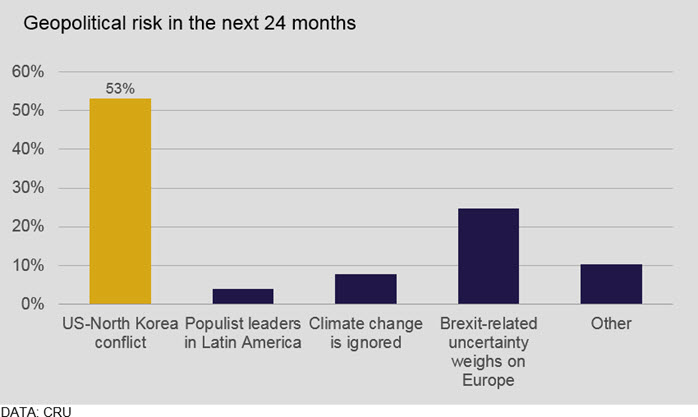 We find, in June 2018, that the risk from North Korea may be fading. The summit which took place between the two Koreas in April was positive, although it did not result in any major shifts. North Korea raised denuclearisation as an option, in turn for a guarantee that the US would not invade. The summit scheduled to take place in Singapore on June 12th is still on but this issue will continue to inject uncertainty into the global geopolitical environment.

As we write in early June, the price of Brent crude oil has been trading around $75/bbl, after hitting $80/bbl in mid-May. The OPEC-led output curtailments have largely succeeded in reducing inventories and eliminating the excess supply of oil, as evidenced by the backwardation in the forward curve for Brent crude. The US withdrawal from the Iran nuclear deal will result in sanctions removing 500,000 bbl/day from global oil supply – this will not take place until November. Speculators have piled into the market so we now await OPEC action on either ending or extending the curtailment agreement. 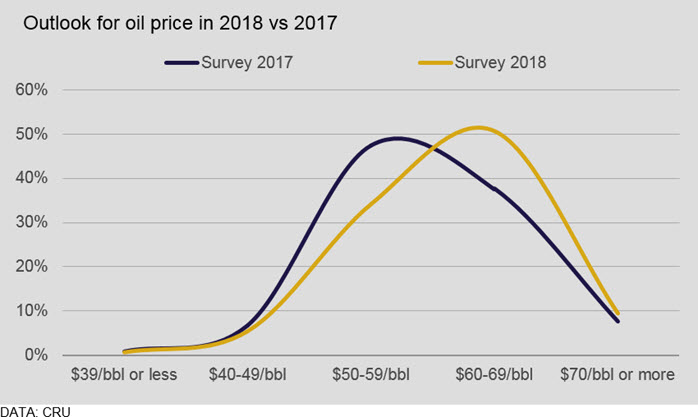 In terms of the longevity of the price rally, it is worth noting that CO2 emissions policies have gained traction this year and carmakers around the globe have publicly committed to producing more cars that are not dependent on gasoline. There is an expectation of demand constraint going forward which should limit the run-up in the price of oil. Although, at the moment, it seems the price of oil is more likely to rise than fall, CRU still expects Brent crude oil to average at the high end of the $60-$69/bbl range in 2018.

As the chart below illustrates, the broad trade-weighted $ (TW$) has now regained all its losses thus far in 2018. The key driver of $ strength is the European Central Bank’s decision not to begin to unwind quantitative easing, which stands in strong contrast to the expectation that the Fed will raise interest rates at least three times this year.

Reality, thus far, is largely as our clients anticipated
The scorecard for our reality check of our client survey is as follows:

See all of our economic team