What does a low carbon transition mean for economic development in mining rich countries?


A low carbon transition has begun, bringing huge structural changes in power and transport markets. These trends will have substantial implications not only for metals demand, but also development in mining-rich countries around the world. However, these important macroeconomic and fiscal impacts remain under explored. Robust analysis is urgently needed to help developing countries capture the opportunities – and manage the risks – associated with supplying raw materials to a low carbon economy.

Drawing on CRU’s market-leading analysis in this area, we present a ground-breaking exploration into the impacts of low carbon transition on mining related output and revenues for a sample of developing countries.

Introduction
The 2015 Paris Agreement signals an accelerating rate of both carbon-related regulation and technological innovation, fostering massive structural changes in both power and transport markets. Such effects are already taking place: annual electric vehicle (EV) sales, for example, have grown by an average of 101 percent annually between 2010 and 2016, while installed solar and wind power has grown by an average of 20 percent annually in the same period, as shown in Figures 1 and 2 respectively. 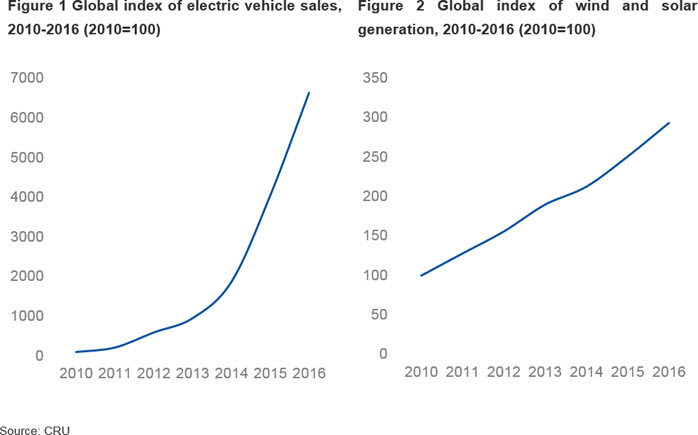 A low carbon transition is likely to have a material impact across copper and other metals markets, given the high metal intensity of many green technologies. To understand these effects, CRU have developed 3 robust, internally consistent scenarios – termed brown, light brown and deep green – as a basis for exploring different possible futures and their potential implications both metal markets and resource rich countries.1 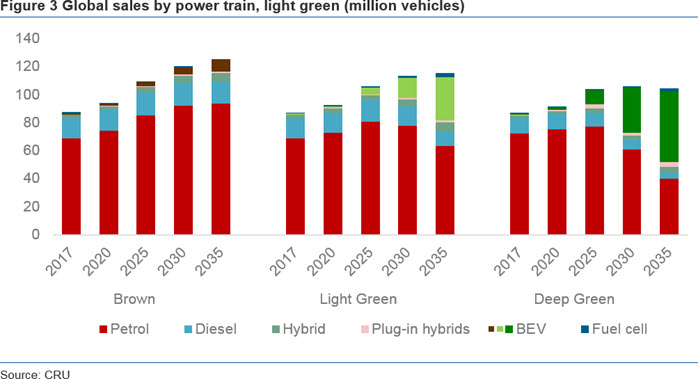 Economic development in mining rich countries, including across much of African and Latin America, will be impacted by these changes. This could lead to structural economic changes, affecting, for example, output, growth, balance of payments and fiscal positions. However, the nature of these changes will depend on the extent and pace of low carbon transition and countries’ resource endowments, as well as other technical, economic and policy factors bearing on the ease and cost of production. These effects are currently only weakly understood.

Policy makers in developing countries are in urgent need of robust analysis to help them take advantage of the opportunities that supplying the raw materials to a new low-carbon global economy can offer, whilst managing any accompanying risks. Understanding the changing demand landscape, as well as detailed economic, policy, technical and geological conditions which shape the associated adjustments in the upstream is key. Using our unique data capabilities, CRU has undertaken pioneering analysis of these topics, with a specific focus on copper, lithium, iron ore and bauxite, for a sample of mining rich countries.

Meeting the demand challenge
The implications of these three scenarios for metal demand are illustrated in Figure 4 for the sample of four commodities. It shows that for certain commodities, particularly copper and lithium, demand is highly sensitive to the rate and degree of low carbon transition. This reflects both the importance of transport and power related end uses to demand and the potential growth of these segments as part of an overall greening of the economy. By contrast, bauxite and iron ore are relatively minimally impacted, principally given the scale of demand outside these sectors, notably in construction. 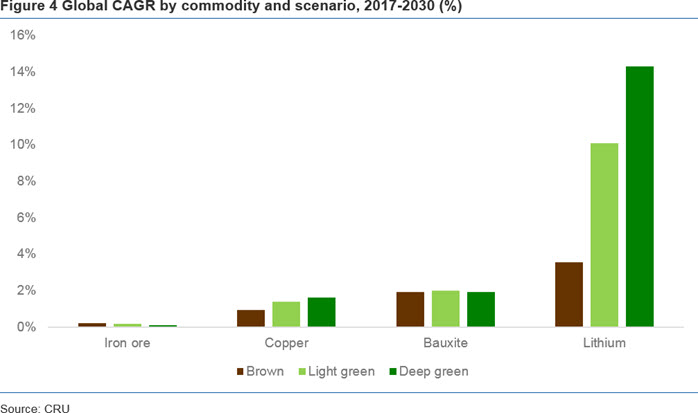 So which countries and regions will benefit from changing demand volumes and, potentially also long run price conditions? Demand for lithium is highly sensitive to the outlook for EVs, as shown below in Figure 5. Latin America will potentially provide a significant share of the new supply, with the established mining centres of Australia and Canada also set to benefit. The potential extent and distribution of supply opportunities for copper under each scenario is shown in Figure 6. It shows that Latin American (and, to a lesser extent, African) copper producers are expected to take a significant share of new supply in the brown and light green scenarios.

It follows that the macroeconomic contribution of the sector may be substantially enhanced by higher demand and (in the case of copper and lithium) prices due to low carbon transition. Figure 7, for example, outlines the net impact of the mining sector’s contribution to GDP for a sample of selected countries. It suggests that mining is likely to become an increasingly important source of national output across the continent of Latin America and beyond.

Chile’s GDP, for example, is 6-7 percent higher in 2030 under the deep green scenario compared to the brown scenario. The deep green scenario also presents significant upside to GDP from copper mining in Zambia and the DRC. Growing demand for lithium supports the commercialisation of projects in Argentina, Chile and Australia, although other commodities will continue to be the major contributors to mining sector GDP in these countries.

However, the nature of these impacts is substantially determined by a nation’s resource endowment. Across the sample of commodities studied, the impacts of low carbon transition on the economic contribution of mining in Brazil and Jamaica, for example, are found to be considerably lower, reflecting the more muted implications of low carbon transition on overall demand implications for bauxite and iron ore feedstocks.

Summary
A low carbon transition has begun, necessitating huge structural changes in power and transport markets. These trends will have substantial implications for metals demand. These changes will breed major development impacts for the mining rich countries. But the risks and opportunities are not currently understood by policy makers and industry alike.

In the first study of its kind, undertaken for a sample of commodities and countries, we demonstrate that low carbon transition has potentially major macroeconomic and fiscal implications, particularly in developing countries. The nature of these impacts depends on factors including: i) the scale and pace of low carbon transition, ii) a country’s resource endowment; iii) full chain production costs (relative to competing supply sources).

Key questions to be further explored

We are holding a free webinar on the 20th March to explore further these issues. If you would like to attend, full details and registration can be found on here.

Endnotes:
1 The “brown” scenario is indicative of a future built principally around existing technologies, in which EVs play a limited role, in transport markets, failing to penetrate much beyond current levels. The light and deep green scenarios are much more transformative in terms of transport market evolution.