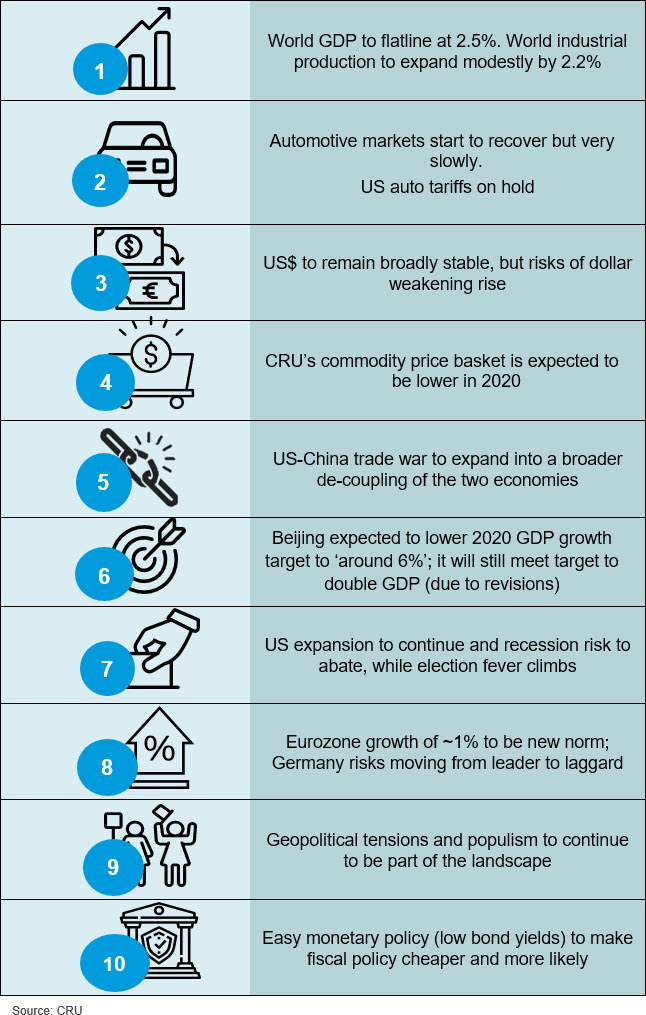 World GDP flatlines in 2020, but expect a mild recovery in IP

We expect world GDP growth to flatline at 2.5% this year and next. Within this total, growth in advanced economies edges down, while growth in emerging markets (outside of China) increases. The story for world industrial production instead, is one of a mild recovery: from 1.4%y/y in 2019 to 2.2% in 2020, driven mainly from improvements in Asia outside of China. These figures are broadly unchanged from our October Global Economic Outlook.

Automotive market will recover, but rather slowly

In 2019, the production of vehicles in key countries plummeted following uncertainty pertaining to the new auto emissions standards introduced in Europe, China and India, or cyclical weakness as was the case in the US. The table above shows that we expect a recovery in world auto production in 2020, but it will be very gradual: 2018 production levels will only be reached around 2022. The headline reason for the recovery is our view that the uncertainty that hindered production and consumer purchases dissipate somewhat.

Auto tariffs on pause
US tariffs on autos and auto parts were looming as one of the biggest threats to the global economic outlook in 2020. A decision was due from President Trump by 14 November, but all we have had is silence. This follows from a strongly worded Whitehouse Statement that car imports were a threat to US national security, particularly with regards to auto R&D. Trade law experts say that the clock has run out on imposing the auto tariffs. This pause is good news, but the issue could return through other legal channels, so it remains a small risk.

US$ to remain broadly stable, but risks of weaker $ rise

Our view is that US trade weighted dollar is currently overvalued relative to fundamental forces by around 5-10%. Through 2019, the US dollar has maintained its broad strength. Except for the ¥, nearly all advanced economy currencies are weaker against the $. Sterling has been hit by Brexit uncertainty and the euro has not recovered due to reduced exports and ECB easing. Emerging market currencies have been hit by the sluggish external environment. Idiosyncratic factors have played a key role in some economies like Turkey which had to battle US economic sanctions as well as domestic policy mismanagement.

The dollar’s continued strength is partly explained by the US’s strong growth momentum and higher interest rates relative to other countries. The strength of those forces is down a touch,
following the recent Fed cuts and the Fed’s balance sheet expansion, in order to support liquidity to the repo market. But the more important driver of the dollar’s strength is the privilege it holds as a safe-haven currency in uncertain times. Our view remains that the dollar is likely to remain broadly stable at this elevated level through at least H1 2020. But if the trade war and other uncertainties abate, we could see investors move quickly out of the dollar and into other currencies that offer more favourable fundamental rates of return.

Commodity price basket expected to be lower in 2020

CRU’s basket of 38 mining, metals and fertiliser prices will decline by 3% y/y in 2020. This is an improvement on the 10% decline we are expecting to see over the full year in 2019. CRU expects the fertiliser price basket to fall by -8%, raw materials by -5% and metals by -1.5%, with increases only seen in precious metals of 8%.

In “Tariffs and populism will continue to drag on global growth”, we explain our base case expectation that the US-China trade war will continue beyond 2020 lowering global growth and spurring reorganisation of global production chains.

De-coupling through economics separation, disengagement and dissociation
In 2020, we expect the US-China trade war to extend and expand to affect other markets (e.g. capital and labour markets). We define de-coupling as a conscious effort to pull-back from existing levels of economic integration and association between the US and China. Signs of this are already evident, and we expect it to gather force in 2020.

Divergent paths on technology is already under way since the US blacklisted Chinese ICT company Huawei – stopping US companies from doing business with Huawei without a special license (albeit a 90-day license extension has been granted on 18 November). This has forced China to pour more resources into developing its own technology, which takes time and is likely to result in a decoupling of technology.

In capital and currency markets, some in Trump’s administration are considering delisting Chinese companies from US stock exchanges, and are known to be unhappy about the US$/RMB exchange rate. Similarly, speculation has been rife that China will sell its large holding of US safe treasuries.

On the labour market front, there is some evidence that while the US remains where most Chinese students go abroad to study and hence stay on to live and work, the number has dropped as the US is no longer the top destination. That said, some of this can be explained by cyclical factors.

Decoupling matters because the lower technology transfer from the US will likely result in China growing a little more slowly in the medium term than previously thought, reducing Chinese commodity demand from countries such as Australia, South Africa and Brazil. A part of this reduced commodity demand could potentially shift to other parts of Asia, if trade currently outgoing from China continues to be diverted to neighbours like Vietnam.

US-China bilateral tariffs rose on 15 September, when tariffs of 10% were introduced on an additional $112bn of Chinese imports, taking the value of goods under tariff to $362bn (up from $250bn in August). The planned October tariff hikes were postponed as part of the “phase 1” mini deal which is yet to be sealed. Talks are still in progress, with markets expecting a conclusion ahead of Christmas.

The September tariff hikes led us to downgrade our China GDP forecast to 6.1% in 2019 and 5.8% in 2020. Downgrading to sub-6% growth (while common among other macro forecasters) was a milestone moment because it meant China would miss its target to double the level of real GDP between 2010 and 2020. Albeit the shortfall was estimated to be marginal RMB0.5trn ($59bn). This is now a moot point, because on 22 November China revised up the level of GDP in 2018 by 2.1% (to RMB 91.38trn), given its latest 5-year census. Revisions post-census is standard in many economies, and the latest revision is smaller than previous census related revisions. China is now comfortably on track to beat its doubling of GDP target by RMB 1 trillion. Beijing has more room to lower its GDP growth target for next year. We expect China to revise down its growth target for 2020 to below 6% from the 2019 growth target of 6-6.5%. We expect this to be announced at the National People’s Congress in March 2020.

There has been much discussion about how long the US expansion can continue. Our view is that the expansion will continue, with US GDP growth slowing to 1.6% in 2020; at that rate, growth will be below the rate of potential or trend output which we estimate to be close to 1.8%.

CRU’s in-house measure of the probability of recession, using information from financial market yield curves, shows that the likelihood of recession in the next four quarters currently stands at 35%. It is down from 40% last quarter, mainly because the September and October Fed rate cuts means the yield curve, a recession bellwether, is no longer beeping as loudly.

Speculation around the outcome of the US presidential election in November 2020 has already begun and will intensify once the Democratic primaries get underway in February. If President Trump is defeated (which will be a very difficult thing to do), then US fiscal priorities could shift. Business sentiment, as well, might change and not necessarily for the better if the next Democrat vying for the White House wants to raise taxes and expand regulations. The US election will be closely watched globally, as the largest economy in the world, its position is still very influential with respect to foreign policy, trade and climate change.

Eurozone’s expansion in 2020 is likely to be broadly the same as 2019 at around 1%, driven by robust domestic demand and constrained by net trade. The weak external environment. will be particularly painful for countries with a big manufacturing sector like Germany and Italy. That said, the latest data on industrial production and PMIs suggest that the slowdown in manufacturing is bottoming out.

Germany’s export-oriented economy is unlikely to repeat the outstanding performance it achieved in the aftermath of the Global Financial Crisis. There is a risk that the recent protectionist backlash (e.g. Brexit, US-China trade war), coupled with the growing desire to onshore supply chains permanently reduce Germany’s exports of intermediate goods. Similarly, another key export sector for Germany – automotive – might face headwinds as challenges to adapt to new electric vehicle engine technologies materialise.

Geopolitical tensions and populism to continue in 2020

A key theme for this year has been the rise in populism around many parts of the world, we expect this to continue in 2020. Populism in our view can typically take two paths: in some cases, it has led to policy gridlock and huge uncertainty (e.g. Brexit); in other cases populism has led to the actual or perceived implementation of policies that are viewed as unfavourable for long run economic growth.

Unrest related to economic inequality (e.g. Chile) as well as political freedom (e.g. Hong Kong) is occurring in economies around the globe. With a diversity of circumstances causing tensions in different economies, it is difficult to quantify the potential risks. In some cases, it may lead to new mining, trade or industrial policies which could have important consequences for the supply side of commodity markets. In other cases, the tensions could give rise to uncertainty thereby negatively impacting spending decisions and economic growth.

With interest rates at historically low levels in most advanced economies, central banks and policy institutions recognise that there will be clear limits to monetary policy in the next downturn. This has given rise to calls for fiscal action. But fiscal policy has not been forthcoming, either because national debt levels are thought to be too high (e.g. in the US) leading to political caution; or because fiscal prudence is a cultural norm (e.g. in Germany).

In a November testimony academic and ex IMF Chief economist, Olivier Blanchard stated that low interest rates lower the sovereign bond yield which reduces the cost of government borrowing. He therefore argued that low rates make debt to GDP stabilisation easier, requiring small primary deficits (instead of surpluses). As a result, there is a bigger economic payoff from using fiscal policy to improve the level of output than from bringing the debt to GDP ratio under control. Some countries are heeding this advice. A good example is the UK. With the general election on 12 December, the two major parties have been competing to outspend each other through borrowing to spend more on infrastructure and healthcare. We expect 2020 to be a year of more borrowing to spend.

Economics Emissions
Explore this topic with CRU
Top
See all