Proudly serving the market for 40 years

CRU has a long-established and proud history of serving the US market with its price and analysis services. January 2020 marks the 40th anniversary of the establishment of CRU’s US Midwest HRC price, often referred to by the market as ‘The CRU’.

In this Spotlight we explore the past four decades of US Midwest HRC prices and events that have helped shape the market.

Serving the market for 40 years
CRU has a long-established and proud history of serving the US market with its price and analysis services. January 2020 marks the 40th anniversary of the establishment of CRU’s US Midwest HRC price, often referred to by the market as ‘The CRU’.

Founded in 1969 as a specialist copper research company, CRU began analysing the steel market in 1980, issuing its first price assessment in January of that year. The first price assessed, in nominal terms, was $326 /s.ton. If we adjusted this number for inflation to put in context of today, it equates to $1,079 /s.ton as the chart below shows. 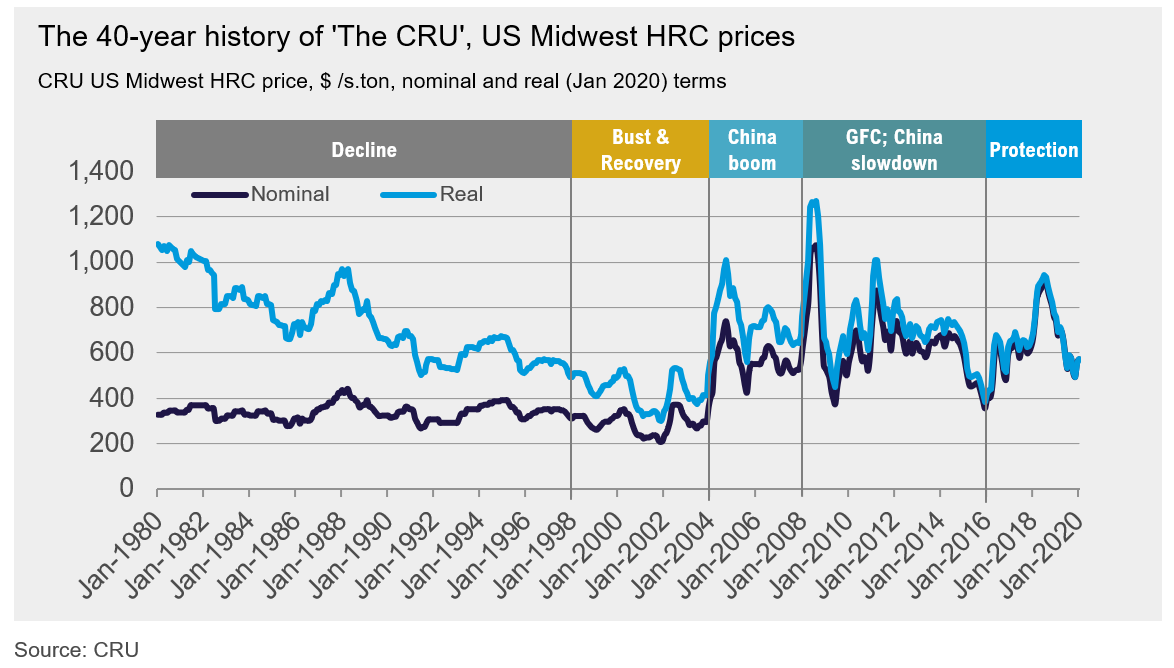 Over an extended period, analysing the real price has helped us to better understand the market as well as its underlying volatility. The CRU has been published over a period when many important events in the US steel industry’s long and colourful life have occurred. Following are some of these events arranged under eras as shown in the above chart:

September 1985
Plaza accord seeking to rebalance trade weakens the US Dollar.

1998
Economic crisis in Asia and Russia floods US market with steel exports.

2004
The ascent of China – acceleration in demand and production.

Has there been a long-term price decline?
While higher in nominal terms due to inflation, today’s US Midwest HRC price is barely more than half of its value in 1980 in real terms. This is because in a competitive industry such as steel, efficiency and costs savings tend to be passed on to customers downstream in the supply chain in the form of lower prices. If this were not the case, margins would rise over time whereas in the longer term it is industry structure and concentration levels that determine industry profitability.

The steel industry has continuously made efficiency savings, most rapidly during market downturns. Overall, an annual saving of 2.5% is typical, and this is equal to the annual fall of CRU’s US Midwest HRC price in real terms up until the start of the China boom. Until that point, changes in input costs had been limited and the main driver of change in the longer-term trend in real prices was cost improvement in the steel industry.

Around 2003/4, steelmaking raw materials prices started to rise on the back of the surge in demand from China. Here, steel demand and production more than doubled in the four-year period between 2003 and 2007. This elevated input costs and arrested the decline in real HRC prices, as did an expansion in margins in the period up until the Global Financial Crisis.

Volatility grows
Around the same time, an increase in price volatility is evident. One of the main sources of volatility in commodity prices is short-term inelasticity in either demand or supply. Unanticipated changes in either, that are not immediately matched by the other, generate the potential for large variation in spot prices.

The pace of demand and production expansion in China from 2003/4 meant that the probability and impact of a mismatch in supply and demand increased greatly, not just in the steel market, but upstream in steelmaking raw materials markets also. This resulted in much larger variations in steel prices due to steel market imbalances. Volatility in steelmaking raw materials prices also increased which compounded steel price volatility. This is shown clearly the chart below: 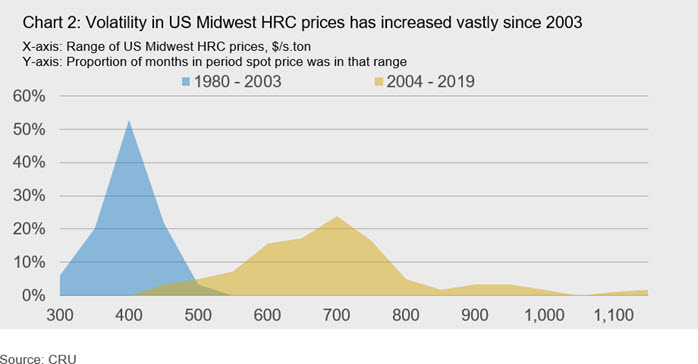 CRU has published a weekly price since 2009, and remains weekly with recent independent market research confirming that the overwhelming majority of physical market participants prefer a weekly price. Market participants shared their views with the market researchers, with some of the related comments addressing the issue of volatility and not wanting to introduce further volatility beyond what already exists:

“… there's too much speculation and volatility in the day to day prices.”

“…the market isn't big enough for a daily number - most of it is noise.”

Evolution of 'The CRU'

Just as US steel prices have developed through the eras, so has CRU’s HRC price and its processes have grown and evolved in terms of:

Frequency: from monthly to bi-weekly to weekly but no further in order to avoid excessive volatility

Methodology: From bids and offers to transaction-only; From phone survey to electronic submission via the CRU Price Collection Platform (CPCP); Adding audit provision, and conducting audits; Adding oversight of a Group Compliance Lead under processes that follow IOSCO Principles

Resources: from one analyst to distinct analyst, administrator and data provider support functions

Global reach: after starting out in the US, The CRU is now referenced much further afield in Mexico, Asia and other markets seeking to export to North America.

Some of the most significant developments in the more recent history are shown in the timeline below, and in greater detail here. 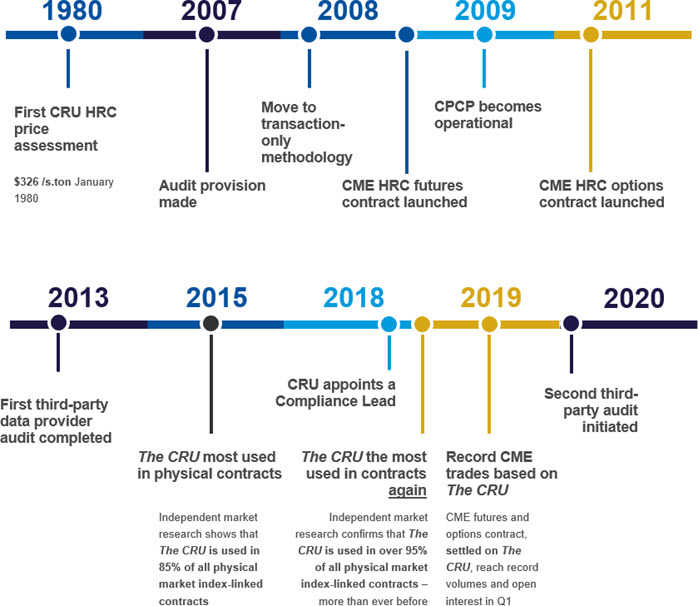 Here’s to many more years of trustworthy pricing

Over the past 40 years, CRU has consistently and continuously delivered its pricing services according to a core principle of reflecting the price, not determining it. We are fiercely independent in our approach and desire to be accurate, not just because our stakeholders expect that, but also for its own sake. CRU feels responsible to provide our customers with the most reliable, robust price possible.

We thank you for being part of CRU's history and future.

Learn more about CRU’s US Midwest price, 'The CRU', by clicking here. To join our CRU data provider network, please contact dewayne.tuthill@crugroup.com. And for more information about CRU's prices, analysis, and forecasting services, please get in touch.

Steel
Find out more about CRU's analysis and prices
Top