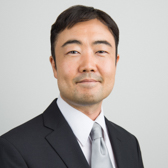 The NPK market continues to evolve as low cost phosphate producers attempt to diversify their product base.

In 2019 imports soared in Myanmar, helping to raise Chinese exports to levels never seen before. Ukraine hit Russia with yet another set of trade sanctions, crushing NPK trade between the countries. Saudi Arabian NPK exports fizzled and disappointed, despite claims they would export hundreds of thousands of tonnes. We cover these topics and more, as well as our forecasts to 2024, in the latest edition of the NPK Market Outlook. To bring in the new year, we share some of our most significant forecasts for 2020 to provide some clarity to an opaque market.

Chinese NPK exports to Myanmar and the Philippines grew particularly strongly in 2019, but it is unlikely that either will import Chinese NPK at the same pace of growth in 2020. In Myanmar, most product is moving overland into the north of the country from Yunnan province. Northern Myanmar increased its Chinese NPK intake by over double in 2019, and it is unlikely that demand can keep expanding at this pace in 2020. Competition from Yara and other producers active in the country will also exert resistance.

China also increased NPK exports to East and Southeast Africa, particularly Mozambique, but export growth to these regions will face competition from regional producers, including Omnia, which commissioned a new nitrophosphate plant in Sasolburg in 2019. Ma’aden may also step up fertilizer sales into Southeast Africa though its new fertilizer distributor and blender subsidiary Meridian, which it acquired in 2019.

2. Africa and diversification to boost OCP exports
OCP NPK and NP exports are forecast to rise nearly 23% y/y in 2020. Much of the increase will originate from OCP’s traditional compound market, Africa.

Nigeria banned NPK imports in 2019, all but eliminating imports. Threatened by oversupply and competition from imported compounds, the Nigerian government took steps to protect and encourage its bulk blend industry and policy by instituting foreign exchange and regulatory bans on NPK imports.

However, local Nigerian blends are often adulterated, and farmers are willing to pay premia approaching 50% for imported compounds. The government has problems procuring raw materials for blends due to poor payment terms and delayed payments, leading producers being reluctant to supply. Further, blend stocks have been reduced. We expect the ban to be lifted in 2020 and that OCP NPK will be allowed once again into the country. We forecast OCP NPK exports to Nigeria rising to nearly 200,000 t in 2020.

After reducing the size of its tender for the 2018/2019 season, Ethiopia returned with a 50% larger tender for the 2019/2020 season. OCP won the tender, consistent with recent history. Though it also tendered for two further seasons, Ethiopia later retracted these awards. OCP’s NP exports will rise in 2020 as there were administrative delays in fulfilling the tender in late 2019, leading more of the award to be fulfilled in 2020. OCP’s NP exports are consequently expected to increase by nearly 250,000 t y/y in 2020. 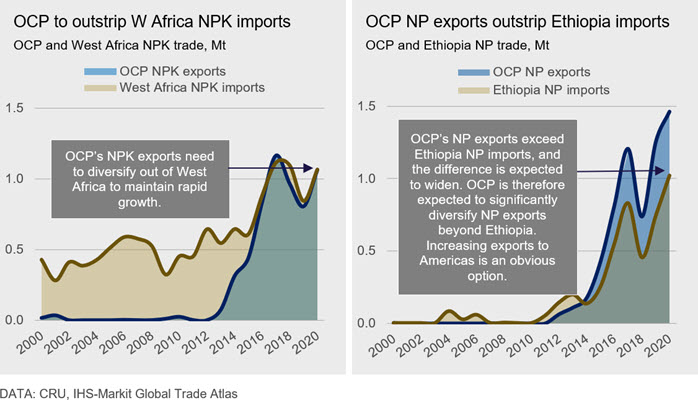 OCP is also expected to simultaneously make deeper forays into markets, reducing heavy reliance on African sales. It will need to, in order to maintain recent rapid export growth. OCP already ships approximately 100,000 t/y NPK to Europe and 50,000 t/y to the Americas. We anticipate OCP will push deeper into these NPK markets in 2020, leveraging its low cost and high capacity. The company exports NP to the Americas in ever-increasing quantities, particularly to the US and Brazil. OCP’s NP exports to the Americas likely neared 300,000 t in 2019. The company will likely hunt for further NP export markets in 2020 to sustain increases, including Europe and possibly India.

Ukrainian compound fertilizer demand will continue to grow in 2020. Although more domestic production may slow import growth, a robust import rise of 7% y/y is still expected in 2020. A range of compound exporters with ready supply, including OCP and Yara, will stabilise their small shares of the Ukrainian export market, together with geographically proximate exporters from Belarus and Poland.

Russia will therefore have little input into the Ukrainian NPK market in 2020. Instead, Russian producers will focus more on other markets, as well as their increasing domestic demand, which has been growing on the back of a weak currency, food import tariffs, rising application rates, and increasing agricultural modernization. Growing domestic demand will absorb some production otherwise exported.

Despite this and the further loss of the Ukrainian market, Russian NPK and NP exports will remain relatively steady in 2020. Some of the export loss to Ukraine is being compensated by exports to Brazil, as it continues to benefit from the ongoing US-China trade war, as well as Europe. PhosAgro in particular will look to export into Europe as it embarks on its new strategy to 2025, which focuses sales into its domestic market and Europe. 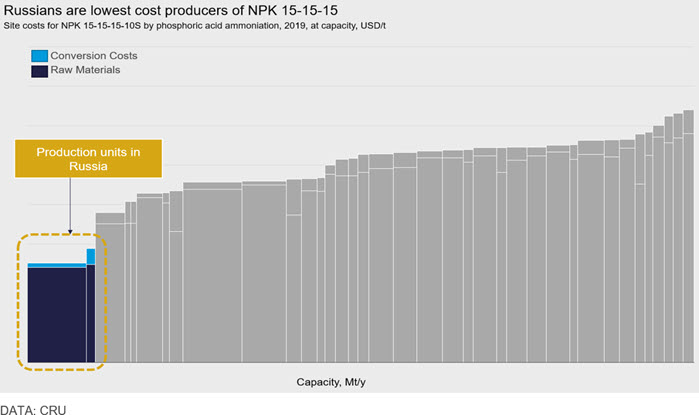 In searching for further export opportunities, Russian NPK producers will leverage their advantage in being able to source all raw materials domestically. Its producers have access to high grade phosphate rock, low cost MOP, and ample supplies of natural gas for ammonia production. As a result, Russian producers have very low production costs, as represented by phosphoric acid ammoniation and nitrophosphate cost curves. Complete curves can be found in the NPK Market Outlook.

4. Soluble grades to further rise in popularity
The NPK grade with the highest count in the new CRU fertilizer grade database is 15-15-15. As it dominates the other unique 1200 grades, it is unlikely to be challenged in 2020. Perhaps surprisingly, the second and third most offered grades from the database are NPK 18-18-18 and 20-20-20, both of which are water-soluble.

The CRU fertilizer grade database lists formulations and variations offered by nearly 50 of the largest compound NPK producers in the world, and it includes compounds, blends, liquids, and powders.

The NP grade with the highest count in the database is 20-20. Technical-grade MAP (tMAP), which is water soluble, is the second most offered NP grade. Water soluble UP 18-44 also finds itself as one of the most offered NP grades. DAP and MAP are not shown in the NP ranking table below, but if they were, DAP would be a distant second and MAP would be near the middle of the top 10 NP grades.

PK grades are much less common but important. The PK grade with the highest count is also soluble, with MKP (52-34) topping the list. 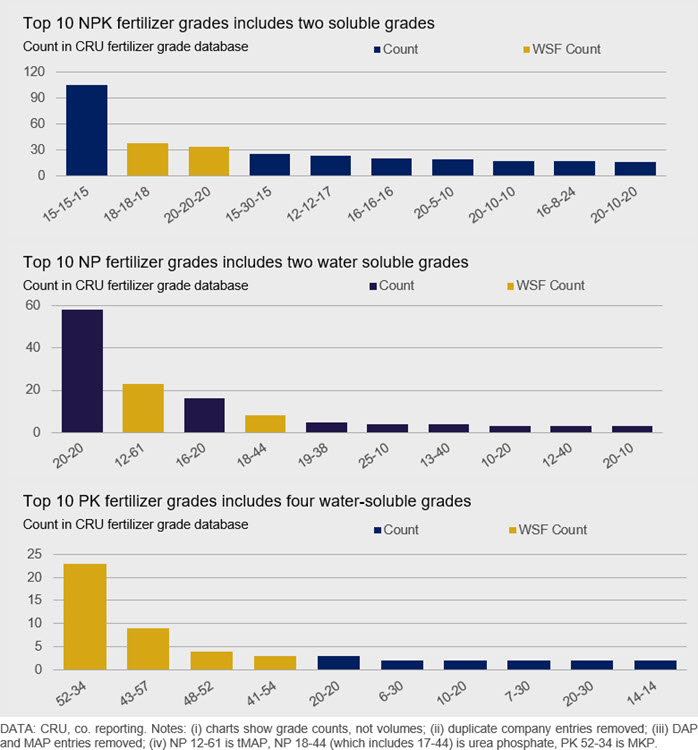 The popularity of water-soluble fertilizers was palpably noticeable in 2019 where, for instance, many major Chinese phosphate producers that we visited on a research visit expressed interest in increasing tMAP production or building tMAP capacity. Many producers have plans to build more soluble capacity. The rise in fruit and vegetable cultivation as consumers become more health-conscious helps drive the change to compound fertilizers. Micro-irrigated areas are increasing to keep up with horticultural demand. Soluble compounds are still growing in popularity, and we expect this trend to continue in 2020.

5. Phosphate prices to lead NPK price recovery
Most NPK and NP price benchmarks have been slowly and steadily sliding since the beginning of 2019, driven by declining nutrient prices. Key benchmark FOB Baltic Sea 16-16-16 fell 10% during 2019, driven most by deteriorating phosphate prices.

Nitrogen prices declined by over 20% y/y in 2019 while potash prices declined by less at 11%. It is phosphate prices, however, that weakened most y/y in 2019, shedding 35%. Phosphate prices tumbled in 2019 due to unfavourable US planting conditions, poorer-than-expected Chinese demand, and a reluctance by producers to implement deep and rapid supply cuts. Oversupply across the phosphate supply chain was the inevitable result. 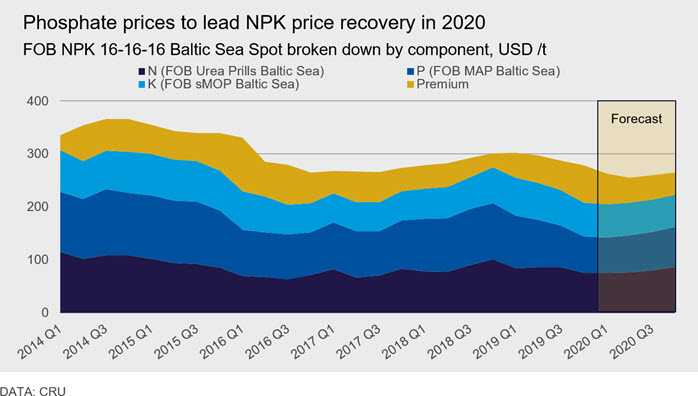 Nitrogen prices are only expected to move significantly higher in 2020 H1. Potash prices are expected to fade over 2020 and over the next several years until supply and demand rebalance. We see phosphate prices also beginning to recover in 2020 H1 and leading in the NPK price recovery.

In 2020, Chinese phosphate suppliers ought to have acclimated to near-certain declining domestic demand. We anticipate pent-up US phosphate demand in 2020, owing to skipped applications in 2019, strong agricultural fundamentals and very cheap prices. Significant phosphate supply cuts are being made by Chinese producers, Mosaic, and OCP. The combined factors are expected to reverse phosphate price declines and by extension, NPK prices. Already, phosphate prices west of the Suez have started rising rapidly. However, we now expect the NPK price recovery to lag the increase in phosphate (and nitrogen) prices by several months.

As discussed in the December NPK monthly report, the phosphate supply cuts also include reduction of NPK production, which will help stop the NPK price premium (yellow in the above chart) from eroding. This may also support NPK price recovery.

As NPK prices reverse direction and begin to climb upwards, nitrogen prices should begin to accelerate, bolstering the NPK price recovery in late 2020.

Extending our vision into the medium term
New developments changed the NPK markets in 2019, and they are likely to do the same in 2020. In the medium term, NPK demand is likely to remain robust as agricultural and horticultural demand rises, and buyers substitute away from straights to multi-macronutrient compounds. However, new questions will be raised. Will Ma’aden accelerate NPK production and where will it export? How will Chinese NPK demand evolve? Will India import more NPK in the future? For views on these issues and more, we refer to the latest edition of the NPK Market Outlook.