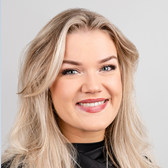 The recent CRU US Ferroalloys conference, held in sunny Scottsdale Arizona, was an excellent opportunity to review the past and future of the vanadium market. After a recent price spike in the market, related to the Russia-Ukraine war, and a subsequent fall in prices, there was an assumption of bearish sentiment for market players. Yet, the future of the market is certainly optimistic, and this outlook kept participants in good spirits.

Vanadium demand has a long history of linkage to use in steel alloying. For over 100 years, steel alloying has represented over 90% of demand for vanadium, although this will soon change as use in batteries continues to gain traction. Though there will be increases for vanadium in steel as well as titanium alloying and non-battery chemicals, it is the vanadium redox flow battery (VRFB) which will see the most change in the vanadium market over the next two decades.

The VRFB is a rechargeable flow battery using vanadium ions for energy storage, mainly in longer duration (4+ hours) grid scale applications. Demand for this type of storage is primarily driven by increasing use of variable renewable energy (solar and wind) which necessitates longer duration storage batteries. The development of the battery began in the lab nearly 40 years ago and has gone from a concept to a viable commercial option for battery storage. While most of the projects which have gone forward up to 2020 were of pilot and demonstration scales, the past two years have delivered more commercial scale batteries. Increases in capacity to produce the vanadium and electrolyte needed for this battery in the last year is a strong indicator of commercial viability, even in the early stages of roll-out for large scale projects.

Previously, most electro-chemical energy storage has utilised lithium-ion and other non-flow battery types. These are less suited to long-duration storage, where VRFBs have an advantage owing to ease of scalability, safety, and high cycle life. The increasing need for storage on the grid will push the balance from nearly non-flow batteries a potential even split by 2040, with total GWh of energy storage rising nearly 10 fold from 2022.

The cumulative share of energy storage using VRFB will rise to 7% by 2030, and to nearly 20% by 2040. Though we will see improvements to the ratio of vanadium per GWh, the high intensity of vanadium per GWh of storage means that even a small share in the future is a big deal to the vanadium market. With a current market of ~110 kt V in 2022, the demand for vanadium will double by 2032 owing more than 90% of this growth to VRFBs. This will change the complexion of the vanadium market from 90% steel derived to 25% by 2040, with VRFBs consuming more than 2/3rd of vanadium demand in 2040. 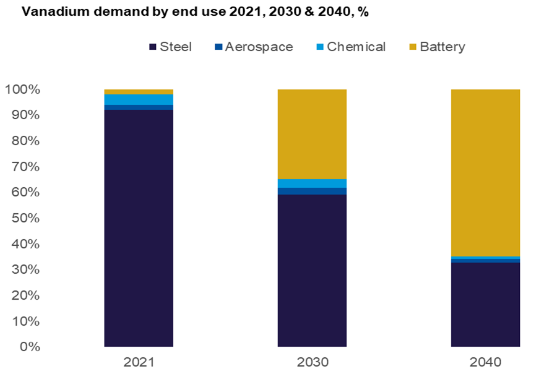 VRFBs are highly sensitive to the market price of vanadium. Thus, maintaining a price suitable to both VRFB development and development of new vanadium sources will be complicated in a historically highly price volatile market. Vanadium producers require financing, which has been challenging given the small market with difficult technical processing. Long term price conditions necessary for broad commercialisation of VRFB and for vanadium projects to be financed may be difficult to meet without technical improvements for both vanadium producers and battery makers. We can conclude, however, that there is significant potential for battery related demand growth for vanadium as long as supply can keep pace.