In this CRU spotlight, John Johnson, Country Manager, CRU China, introduces China’s “Made in China 2025” strategy (MiC2025), and how it may impact the commodities followed by CRU. CRU’s China office research suggests that this new strategy, which is not widely understood outside of China, is likely to be a major disruption to world commodity markets.

At first sight, the 10 advanced industries identified in China’s MiC2025 strategy do not appear relevant to the world of “commodities”, but global mining companies and downstream metals producers are rapidly reevaluating their own strategies, partly as a result of this policy, since it is likely to change the playing field in which they operate. Two recent examples include BHP Billiton and Glencore declaring a significant move into new battery metals.

The above list is anecdotal and represents just a few recent news stories from China, but it is indicative of China’s huge growth potential in higher value manufactured items, which is the focus of the government’s “Made in China 2025” initiative.

Made in China 2025 (MiC2025) was officially launched in May 2015 to support the development of advanced industries and technologies in China. It was inspired by Germany’s Industry 4.0. However, it goes beyond the German model insofar as the Chinese government has set more ambitious goals, such as self-sufficiency and market share for developing 10 industries (see chart below). These industries are backed by R&D investments, funds and other government support measures to achieve these objectives and encourage M&A. CRU expects that many commodities and product sectors related to these particular industries will be impacted enormously, with some winners and losers. Some metals and sub-sectors may benefit, while others may be regarded as laggards.

Exploding the niche
Although commodity grade demand growth is slowing to low single digits in many areas in China, the sectors that are expected to benefit from “Made in China 2025” are likely to grow at double digit rates. Moving up the value chain and raising productivity is a natural progression for a middle-income country, as demand for low value products begins to slow, but in China, this transition has the full backing of the Chinese government which is handpicking a few key industries to develop self-sufficiency.

CRU believes these 10 end-use industries will change purchasing requirements for commodities in two key areas. Firstly, China will move from commodity grade products into higher-value products, to satisfy the more demanding quality requirements of these industries. For example, motor vehicles and other transport and mechanical equipment will require lighter and stronger steel and aluminium. Secondly, the volume of the products and raw materials required in some markets will increase enormously and/or new markets will arise. Furthermore, some markets that were previously considered niche markets, or that are niche markets in the West, will become much larger volume markets. This is a vital difference between China and other markets, since the scale of these new developments will be more significant. For example, the demand for lithium, cobalt and nickel sulphate should rise multi-fold over the next 10 years due to an increase in China’s battery production for electric vehicles. 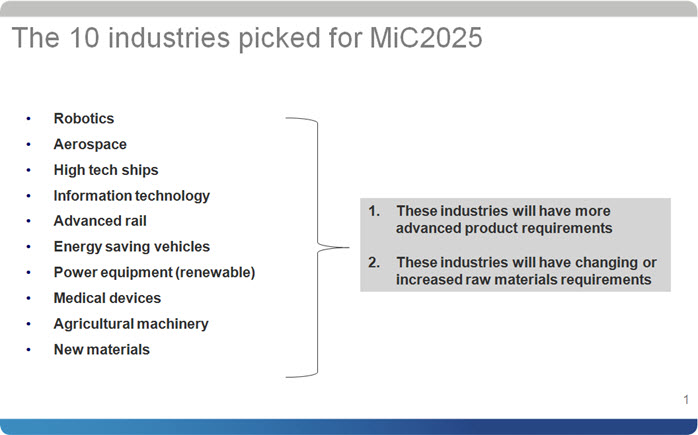 This strategy has the potential to lead to significant opportunities and threats, and will be disruptive to global markets. For example, overseas producers of some higher value products serving these industries that were previously protected from Chinese exports may no longer be safe from such incursions. Also, there will be opportunities to benefit from the supply chain in supplying inputs into these fast growing industries.

Indigenous cost innovation…
The logic behind MiC2025 is clear. China wants to make worldwide industry more competitive by closing the technology gap it has had with developed countries until now, and developing its own “indigenous innovation”. This is motivated by the domestic economic slowdown and the perceived challenge from other developing countries in low cost manufacturing and on-shoring or near-shoring in developed countries. Moreover, this is not only about moving into higher value products already occupied by leading Western producers, it’s about developing new “indigenous innovation”.

Mic2025 covers a 10-year period, 2016-2025, and with targets for 2020 and 2025, the MiC2025 is the first of a three-stage plan for establishing China as a leading global manufacturing power by 2049 – the 100th anniversary of the founding of the PRC. These ambitions may sound like platitudes, but when the Chinese government focuses its policy actions on a target, it would be unwise to ignore the trend and its implications.

China has fewer impediments to cost innovation due to the large size of its market and relative maturity. The only limitation could be intangible assets, such as brands and intellectual property, but Chinese companies are acquiring these through massive purchasing power.

CRU’s cost models suggest that China is improving its technology much more quickly than anticipated even five years ago.

Recent evidence collected by CRU suggests that increased production (and exports) has already occurred in various high-end product markets, as shown in the following charts.

… is already evident in some high-end products
The accompanying charts show China’s total proportion of global production in a selection of high-value products closely followed by CRU. Some of these products are relatively mature, such as silicon steel and aluminium can stock, and pre-date MiC2025, while others are relatively new products such as optical fibre, aluminium auto body sheet (ABS) and electric vehicles are very much part of the MiC2025 strategy.

All of the above products have experienced strong demand and production in China, with growth rates significantly above 10% per annum, and those products in the right chart, notably EVs and ABS, are now growing significantly above single digit rates. Thus, one question that might be asked is whether the successes of silicon sheet, aluminium can stock and optical fibre, where China has raised its share of global production to above 60%, can be transferred to other products, where demand volumes are expected to surge as a result of deliberate government policy. This may just be the beginning of fast growth for some of these commodities and products. 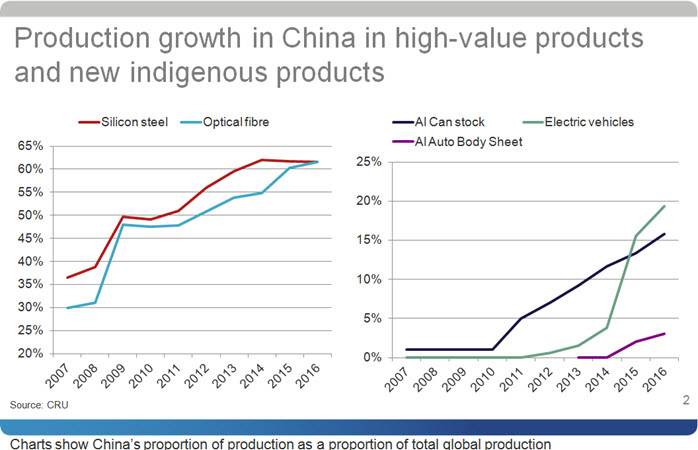 Silicon steel (also called electric steel sheet) is a high-value steel product used in electric dynamos and transformers, but China has historically been unable to satisfy its own domestic demand. As a result, production was pushed and has grown at more than 10% per annum over the last decade. The recent merger between Baosteel and Wugang will strengthen China’s presence even further, which is, in fact, one important factor behind this government-sponsored merger.

Similarly, aluminium can stock is a high-value aluminium product where Chinese producers identified import substitution opportunities to create domestic production technology and self-sufficiency. Can stock is a mature high-value technology which China was relatively late in developing, but its late entry into this market was disruptive for overseas incumbents. China is fast becoming a significant can stock supplier to the world. As a result, there has been a shift in Western rolling mills from can stock to ABS (auto body sheet). However, Chinese rolling mills are moving into ABS as well. This has already started with production growth of 25% per annum over the last four years, a trend which is likely to continue.

Optical fibre, used in telecommunications, is a good example of China leap-frogging Western technology in the use of information technology. Before optical fibre was introduced to many homes, China did not even have copper connections for telecommunications. Consequently, unlike Europe and the USA where it was possible to upgrade copper to carry the Internet, China has leapt directly into optical fibre. China now produces more than 60% of optical fibre in the world. The impact of the introduction of 5G is likely to raise optical fibre demand levels much further, and may also increase the demand for copper.

China has set aggressive growth targets for electric vehicle production (7 million by 2025 from 330,000 in 2015) and MiC2025 is one such strategy designed to bring about this change, which is also linked to China’s environmental and pollution strategies. There are many issues to consider, such as the EV infrastructure required to support this development, but this growth is expected to generate increasing demand for battery metals such as lithium, cobalt and nickel sulphate, as well as for other metal products used in the EV infrastructure and lightweight materials.

China is expected to dominate the battery market due to the rise in battery manufacturing plants, and potentially lower costs from the acquisition of overseas mining assets and control over the supply chain.

Beyond the above, the impact of growth in robotics, aerospace, high-tech ships, rail, machinery and power equipment will have similarly disruptive influences on sourcing. This influence can be on the supply chain for commodities from rare earths used in high-tech products to silicon used in solar panels. Alternatively, it can be related to value added products, such as special quality steel plate used in renewable energy wind turbines. Moreover, sub-sectors within some of the above mentioned sectors such as grain oriented electric sheet, higher-value automotive body sheet, submarine optical fibre cable and improved-performance batteries will advance further along the value chain. China is experiencing a “cascade effect” as it moves its attention to higher-value areas until it is leading innovation in these areas too. At the same time, government-sponsored mergers in these industries are helping this come about.

Consider your vulnerabilities
The implication of the MiC2025 strategy is uncertain for many mining and downstream metals producing companies worldwide, but this policy is sticking. China is moving into higher-value markets in these 10 handpicked industries, and it will also move into export markets. Existing incumbents will risk losing market share in China and overseas, both in these 10 industries and to the suppliers to these 10 industries.

However, like all strategies, Chinese cost innovation may have its limitations. Lack of intangible assets and the need to master a complete value chain may hamper China’s ability to penetrate the global market for certain products. There may also still be a technical frontier beyond which disruptive competition from China cannot reach, although this frontier has already been breached in many industries.

There will be issues along the way, but it is likely that the requirements for value-added products in many of the industries mentioned above will grow at double digit rates. This has implications for the supply chain and competing producers overseas who have relied on exports to China, or who will suffer competition from China in traditional markets. It is important to jettison the notion that high-end product niches are not vulnerable from Chinese competition. Trade frictions may follow. There may also be increasing opportunities for raw materials and equipment suppliers in these markets since these industries’ demand patterns are changing significantly. China is also relaxing foreign direct investment in many areas, so overseas producers may consider supplying from inside of China rather than from outside, as China will have its own version of on-shoring.

In CRU’s China offices, we are following developments and changes in these markets very closely. CRU’s China Consulting team can help identify China’s capability and industry cost competitiveness, the speed of this transition and the expected impact on domestic production and export volumes in each high-value sector. We are also able to assist with looking at vulnerabilities and supply chain opportunities in these areas. CRU Analysis provides regular services on many of these products and commodities, including Market Outlooks for Steel Sheet, Steel Plate, Aluminium Can Stock, Aluminium Auto Body Sheet, Lithium, Cobalt, Nickel and Telecom Cables. If you want to know more about how China’s “Made in China 2025” strategy can impact your particular business or industry, please contact us.