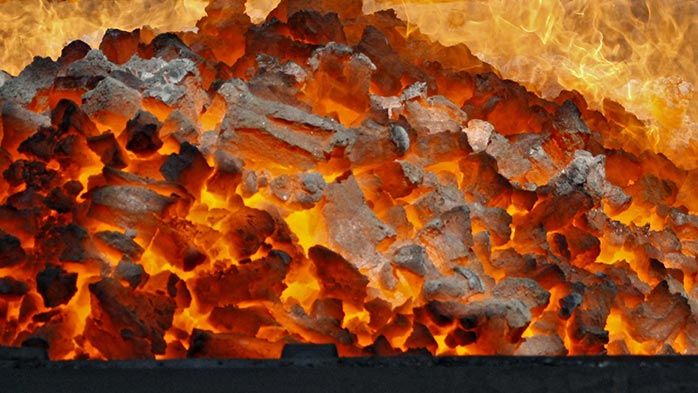 Stability in the cost and supply of metallurgical coke is imperative for the long-term viability of steel producers. For those steelmakers over-exposed to global commodities prices, their profitability can be impacted by external influences such as foreign government policy and political motivations.


This Insight highlights how the supply-side reform in China’s domestic coke industry has increased margins on coke production and directly disadvantaged steel mills that procure coke on the seaborne market, pulling down profitability by ~1% EBITDA margin or more.

Low margins and pollution led to China’s supply reforms
The recent switch of focus onto the supply-side reform of the coke industry by the Chinese government is driven by the twin concerns of over-capacity, which has led to extended periods of negative margins and greater indebtedness, and pollution.

To illustrate, whilst hot metal production in China fell by ~5% y/y in 2015 Q4, domestic coke production remained strong, dragging margins down to unsustainably low levels as individual producers sought to maintain market share. As a result, in the February 2016 edition of CRU’s Metallurgical Coke Market Outlook, we forecasted that coke industry margins would average ~$(2) /t in 2016 and, in the absence of any supply-side reform, margins would remain low over the medium-term. Poor profitability in the domestic market incentivised Chinese producers to divert material to the seaborne market and the increased level of exports and low margins negatively impacted production elsewhere in the world.

In addition, coke production is one of the most polluting stages of the integrated steel making process and the increased emphasis on air quality in China has put this process in the spotlight, whereas previously it had escaped governmental scrutiny.

The combination of unsustainably low margins and heavy pollution left the coke sector exposed to supply-side reform. The sector has now seen 64 Mt/y of coke capacity closed since 2016, equivalent to ~10% of total capacity, of which 26 Mt/y has been permanently shut down during 2018-to-date. CRU forecasts that 32 Mt/y of coke capacity will be temporarily impacted over the upcoming ‘winter heating season’ period from October 2018 to April 2019. Coupled with on-going environmental inspections during 2017 and through 2018 so far, our analysis shows that capacity utilisation across the coke sector has lifted substantially and this has lifted margins. CRU’s base case view is that further closures over the next 5 years must continue at an average rate of 21 Mt/y in order for utilisation rates to increase to levels where coke producers will earn sustainable margins.

Given this, in the August 2018 edition of CRU’s Metallurgical Coke Market Outlook, under our base case assumption for closures, we now forecast that Chinese coke sector capacity utilisation rates would rise to ~77% in 2019 and margins would average ~$25 /t, up from near-zero in recent years. Our analysis shows that, if sustained over the medium-term, this level of margin performance would just be enough to allow the coke sector to invest in the necessary environmental controls to reduce pollution and pay down debt. Ultimately, we expect further closures and for capacity utilisation to lift to ~83% by 2022, at which point coke capacity will be ~500 Mt/y, equivalent to a fall of ~23% since 2016; under these conditions, margins are expected to reach ~$40 /t and exports down from current levels.

Importantly, given the higher margins in the domestic market, Chinese coke producers already have less incentive to divert coke to the export market and exports have fallen, whilst the price of export coke above underlying coal costs has lifted. This has disadvantaged those mills that buy 3rd party coke relative to their fully-integrated peers. 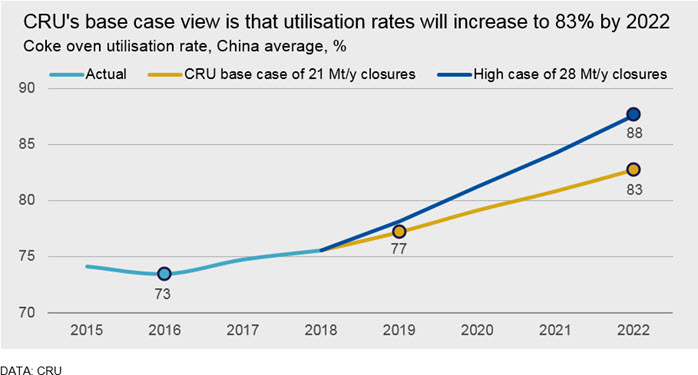 We have also modelled a high case scenario, which factors in an average rate of closures of 28 Mt/y over the next 5 years, which is more in line with the level of closures expected across the wider steel sector and equates to an overall capacity reduction of ~27% since 2016. In this scenario, capacity utilisation rates would increase to ~88% by 2022, even though coke demand is forecast to fall over the period. Under this high case scenario, margins on coke would rise to ~$50 /t, further disadvantaging mills exposed to the 3rd party coke market.

Producers elsewhere capitalise on fall in Chinese exports
Attractive domestic margins and a decline in Chinese exports has incentivised global producers to increase production. Coke producers in Colombia and Ukraine have reacted and appear to be the main beneficiaries of China’s supply-side reform policy so far. Colombia increased exports of coke by ~40% y/y in 2017, largely due to increased exports to India that were up by ~700% y/y. Ukrainian producers are currently investing heavily to raise production and take advantage of the higher margins on offer. It is worth noting that merchant coke producers in India are still largely unprofitable, even under current, higher margin conditions, due to the under-investment in many plants and associated high costs. As such, we have not yet seen a rebound in Indian merchant production.

A lack of coke self-sufficiency leads to increased costs
The Tata Steel Europe operation at Port Talbot in the UK, which was slated for closure 2 years ago, is an example of a steel mill that is coke short and which has been further disadvantaged by China’s supply-side reform. CRU’s Steel Cost Model shows that, typically, Port Talbot needs to source ~30% of its 1.4 Mt/y coke requirement from the external market. Given that margins on exported coke have lifted in the last 2 years, this means the operation is in a less favourable cost position than in 2016 when coke margins were close to zero.

The below chart shows that Port Talbot sits in the 3rd quartile of the global HRC cost curve with an average cost of ~$486 /t, ex-mill in 2019, based on CRU’s current forecast of average coke margins of ~$25 /t in that year. However, without supply-side reform and with coke margins close to zero (i.e. pre-2017), HRC costs at Port Talbot would have been lower, at ~$482 /t, ex-mill according to our analysis. Equally, if margins on coke ultimately increase to ~$50 /t, a site such as Port Talbot would be disadvantaged by up to ~$7 /t, with costs of ~$489 /t, ex-mill at 2019 input prices.

Whilst these differences may not seem significant, they equate to a reduction in profitability of more than 1% EBITDA margin at 2019 steel prices. For steel mills that are more exposed to the 3rd party coke market (e.g. the Joao Monlevade plant in Brazil sources its entire coke requirement externally), the cost and profitability impacts would be even greater. It is also worth noting that, whilst global steel margins have improved for certain producers over the past few years, they still remain low for steel mills in the 3rd and 4th quartile of the cost curve. For these less profitable producers, changes in input material costs will have a more significant impact on margin, as illustrated throughout this Insight.

Steelmakers’ competitiveness hit by supply-side reform
CRU’s base case view is that Chinese supply-side reform of the coke industry will continue over the medium-term and coke capacity will be permanently closed at an average rate of 21 Mt/y out to 2022. As a result, coke margins in China will lift to an average ~$40 /t by 2022 from near-zero in recent years and could rise to ~$50 /t if reform is accelerated. This will directly and negatively impact on the competitiveness of steel mills that are coke short, reducing profitability by as much as ~1% EBITDA margin for steel mills that are significantly exposed to the 3rd party coke market.

CRU has more than 30 analysts based in China and has expertise across the steel value chain. If you want to hear more about our views on the Chinese steel sector and the expected impact of environmental and supply-side reform on costs, prices and profitability, please get in touch with the author using the contact details given.