Reflections from CRU Ferroalloys in Orlando 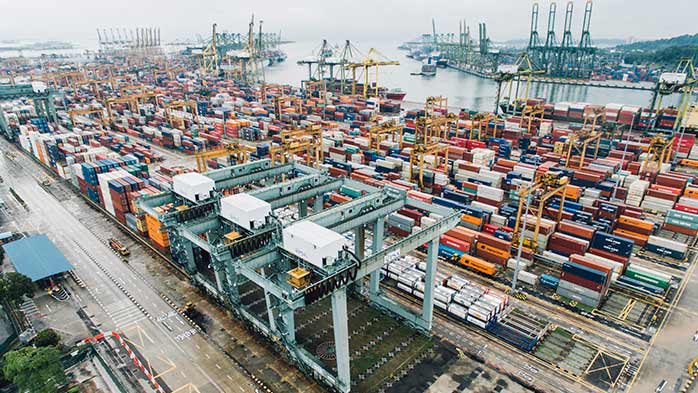 Last week saw around 700 delegates from across the ferroalloy industry descend upon CRU’s annual Ryan’s Notes Ferroalloys Conference in Orlando. Policy risks were some of the biggest talking points as participants become more cautious in their outlook. This Insight reflects on some of the take-aways from the conference.


During the three days of expert talks, we spoke to attendees about the biggest market topics on their minds. Recurring themes were monetary, trade and environmental policy, the same themes reflected in a recent poll recently undertaken by CRU Consulting (see Figure 1 below), which places trade risks at the top of respondents’ concerns. Clearly the evolving geo-political climate is inviting uncertainty and speculation, creating opportunities and risks for the ferroalloys sector, particularly in China and the US. 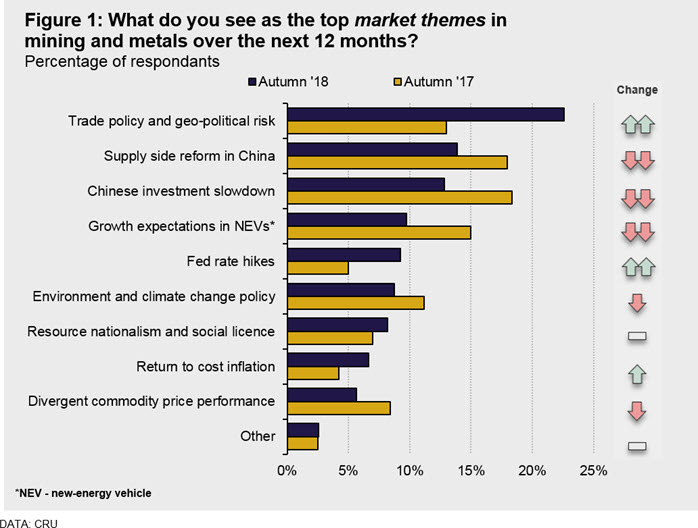 Is global trade war entering a downward spiral?
Last year, we warned clients the US President had considerable latitude, and little oversight from Congress, in relation to trade policy. As we all know, these risks have begun to crystallise with the US placing import tariffs on steel (25%) and aluminium (10%), with few exceptions allowed to this point. On 24 September President Trump imposed tariffs on an additional US$200bn of Chinese imports, with China retaliating by imposing tariffs on an additional US$60bn of US imports to China. These newest tariffs are expected to push up consumer prices and drag down exports and growth in both economies. This is not the end of the line, either, as US pressure on China to reform will continue. In addition, we await the conclusion of the Section 232 case on US imports of vehicles and parts to be announced before February 2019.

As US political focus remains on allegations that China has manipulated markets and currency, created barriers to market entry, and has carried out long-term misappropriation of intellectual property, these disputes are continuing to create uncertainty and volatility in the market. A deepening of the trade war could drive market sentiment to become more negative. However, for commodity producers, real uncertainties exist surrounding the effects of policies designed to cushion the impacts of a trade shock.

Trade war tensions creating opportunities and risks
Beyond China’s recent response by increasing tariffs to the majority of US imports, it has also eased export restrictions last month through an increase in the VAT rebate for 397 items including lithium batteries, machinery, and stainless-steel products. Trade related concerns have also encouraged China to implement its winter heating cuts in a more flexible, and potentially overall less impactful way.

How will China respond if the China hawks in Washington DC continue to prevail? Clearly, there is room for further tit-for-tat border measures. China is also likely to relax fiscal and monetary policies. Two weeks ago, for example, the People's Bank of China announced it was cutting the reserve requirement ratio for most banks by 100 basis points. This will result in an injection of roughly 750 billion yuan (~$110 billion) in cash into the banking system.

The demand impacts of past credit expansions in China have proved powerful. However, such actions potentially run contrary to recent efforts to de-lever. Moreover, for commodity suppliers to the debt laden Chinese construction industry, such interventions may ultimately be storing up further trouble for the future.

Another potential policy lever could be to further accelerate the implementation of the much-vaunted Belt and Road Initiative. Again, this could have potentially powerful impacts for metals demand. Whether or not the impacts of these policy interventions would be strong enough to countervail the effects of the trade shock is clearly an open question.

Notably, rising trade barriers will also serve to compartmentalise regional or national markets from each other across in the ferroalloys and steel markets. Further rises in tariffs could serve to separate normal relationships between markets.

Trade was the primary topic at least one presentation, that by Alan Price, Chair of International Trade Practice at law firm Wiley Rein LLP, with many others mentioning trade impacts on individual ferroalloys markets demonstrating the recent focus on trade tensions. Clearly the evolving geo-political climate is inviting uncertainty and speculation, creating opportunities and risks for the ferroalloys sector, particularly in China and the US (see Figure 2 below).

Sentiment appears cautious amid broader structural changes
Prices for most ferroalloys have appreciated significantly since 2016 (Figure 3). This has been driven by a combination of stronger than expected global economic data, steel demand and margins, lack of new development spend in upstream and downstream operations and supply side environmental reform and regulations in China.

The bull rally has lost some of its steam in recent quarters however. Stronger than expected demand and prices have seen production respond and some markets are increasingly turning into oversupply, with reported and unreported stocks on the rise. This has been compounded by broader macro and policy headwinds, which has led to some cooling in markets, in particular in bulk ferroalloys and silicon. Indeed, many market participants at the conference appeared cautious amid expectations of higher inventories and stronger competition in the North American market. Outlook sentiment was based on market by market read of fundamentals and the degree to which the primary market risks, Trade War and China environmental, effected each market. Many markets have firmness in near term prices, mainly found in particular noble alloys and minor metals markets. However, other markets have less sanguine outlooks the near term, particularly in some bulk ferroalloys.

Notably however, supply side reform and stricter environmental regulations in China in particular have and continue to have a transformational effect on global raw material and intermediate product markets. While initially viewed with skepticism, these policies have been the most effective attempt to date at tackling absolute pollution levels and addressing the issue of structural overcapacity, firming prices and pushing up utilisation rates and margins (see Exhibit 1).

However, with the economy vulnerable to an escalation in trade hostilities with the US, has the Chinese leadership softened its stance on managing supply and environment through the winter period in favour of managing the economy? And does this threaten to derail the positive change in balancing the market and turning a largely loss-making sector to profit?

Winter heating season cuts were a big headline grabber in the market last year but in the end it had a much smaller impact on production than broader supply side reform. Environmental and air pollution standards have actually tightened slightly from last year, despite a less heavy handed in administering and managing the execution of these targets as controls have been largely delegated to the individual regions. With the adoption of more sophisticated environmental compliance systems, the bigger question perhaps is what will be the impact on operating and capital costs for existing and new projects, and how will this change their competitiveness vis-à-vis Western operators? And what will it mean for demand (and premia) for higher quality feedstock? 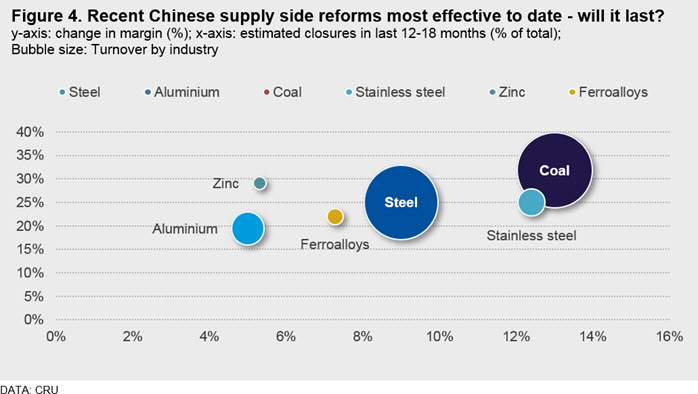 Amidst all the noise, we must remember that supply reform in particular has transformed the metals processing landscape, for the better. The capacity and production cuts have been seen as a success by the government and, importantly, by the middle classes. President Xi (Shi) Jinping has delivered blue skies to the middle classes and that is not easy to take away. While the need to manage the economy through a period of uncertainty may have taken relative priority, China in our view remains committed to these policies, focused at improving profitability in the steel and ferroalloys sector, its environmental footprint and ultimately moving into more value-added downstream industries with programs such as “Made in China 2025”. This should be positive for ferroalloy producers across the globe and the US and should open up opportunities for participants across the value chain.

Vanadium steals the show
The effects of Chinese policy aimed at improving environmental and safety standards, and strictly enforcing those, is not only affecting supply however. The introduction of new rebar regulations and standards, which in effect ban the use of certain steel treatment practices in favor of great use of alloys for microalloying will have a significant impact on the rebar sector, and one commodity in particular – vanadium.

The past 18 months have seen spectacular changes in the vanadium market. Prices have risen around 450% since July 2017 and the market value has risen from $2bn to almost $10bn, as persistent structural deficits have seen stocks all but disappear at a time of changing environmental and rebar legislation in China. This makes vanadium the best performing metal of all in the past 2 years, even ahead of cobalt (Figure 3).

Market participants are now struggling to secure sources of supply and investment houses are examining which projects are best placed to come on stream to meet growing demand. In a separate Insight, we will investigate the causes behind this and opine on the likely evolution of the market, and key factors bearing on it.

At CRU we make it our business to assess and identify exposures and opportunities arising from cyclical and structural changes in the ferroalloys and associated markets and, through our global and dedicated analyst teams and consultants, provide support in the form of regular market analysis and tailored consulting services, in financial due diligence, growth and procurement strategy. To learn more explore the topic with CRU below.