Essar Steel is a marginal cost producer in Indian, straddling the 90th percentile of the cost curve, as such it plays a key price setting role.


At current natural gas prices, and under steady-state market conditions, the Essar Hazira operation is unlikely to be able to operate above 6.0 Mt/y, well below its full capacity.  Further, given the configuration of Essar’s Indian assets and reliance on expensive natural gas for marginal tonnes, its marginal costs are of relevance to both prices and production capability.  Any reduction to costs at Hazira (i.e. through access to lower priced natural gas or investment) could support higher production volumes, but this will certainly lead to a structural lowering of HR coil prices in India, which would impact the whole industry.

Essar Steel’s position on the cost curve
Annual HR coil production from major steel producers in India was ~33 Mt in 2017 and average production costs were $427 /t, but costs ranged between $370 /t and $485 /t for Tata Steel, Jamshedpur and Essar Steel, Hazira, the lowest and highest cost producers respectively. However, given that the price for HR coil always inclines towards the highest cost producer, lower cost Indian producers can earn good profits.

The gap of $115 /t between Jamshedpur and Hazira is linked to the latter’s steelmaking configuration – more than 50% of its capacity is based on gas-based DRI operations – the costs of which are very sensitive to natural gas prices.  That is, the single blast furnace and Corex® units, as well as DRI units that are operated using Corex® off-gas, provide the base-load steel production at Hazira.  However, steel production over-and-above that which can be provided via these routes (i.e. ~5.5 Mt) requires the purchase of natural gas to support additional DRI production.  As such, it is important to understand not just the average costs of steelmaking at Hazira, which will be influenced by the lower-cost, but by no means lowest cost, hot metal and process gas-based DRI routes, but also the marginal costs, which are more influenced by the natural gas price.  These latter costs are more relevant to pricing and will dictate the production volume that the Hazira site can operate at under different market conditions. 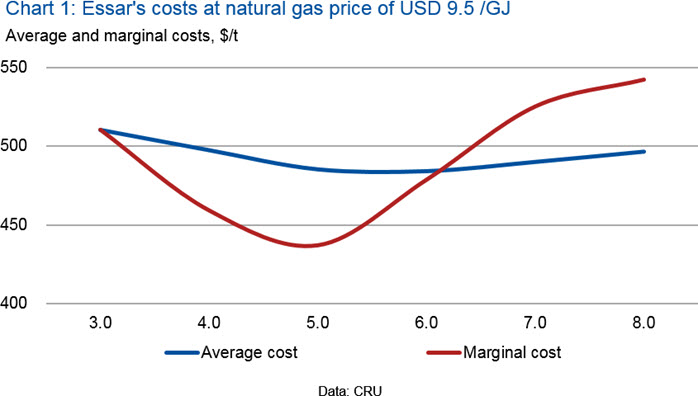 The profile of marginal costs at the Hazira site is important as, not only is it a high-cost facility but, given its price setting role in the Indian context, it is the marginal costs of production at this site that will drive prices in the country.

During FY’14, FY’15 and FY’16, the natural gas available to Essar Steel reached as high as ~$15 /GJ, del. Hazira and this severely curtailed the viable production volume at the site. Corex® gas has not always been used in DRI production and, during this period, only one of the DRI modules at Hazira was operated and total output was limited to <3.5 Mt of crude steel (n.b. this low production volume was probably due more to the availability of the natural gas, rather than its cost).

The graph below shows the equivalent average and marginal costs at a natural gas price of $15 /GJ. Here, you can see that, at the minimum cost level, average costs sit ~$15 /t above those obtained at a natural gas price of $9.5 /GJ – that is, the underlying cost structure at Essar deteriorates at this natural gas price, as expected. However, it is important to note that, above ~5.5 Mt, marginal costs rise rapidly, ultimately reaching >$120 /t above the minimum cost level. Again, given the price setting role of Hazira in the Indian context, the level of marginal costs is a key determinant of the viable production volume under different market conditions. 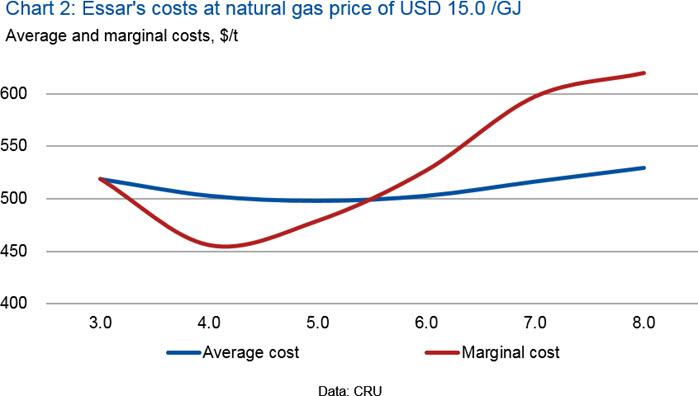 Using CRU’s Steel Cost Model, we attempted to identify the natural gas price at which the operations are not disadvantaged and at which the full capacity capability of the site could be exploited. In this regard, the following graph sets out the average and marginal cost curves for Hazira, based on a natural gas price of $5 /GJ.

At $5 /GJ, marginal costs do not rise above average costs at any point, therefore, we believe this is the natural gas price at which there is potential for the full capacity capability of the current configuration to be exploited, given appropriate market conditions. 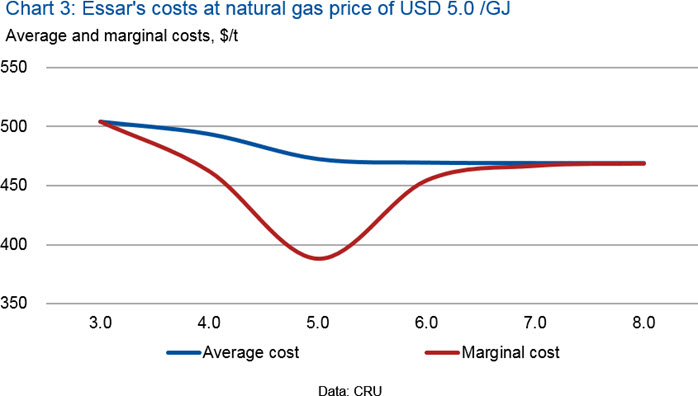 Implications for Essar and the Indian market
It is our view that Essar, Hazira has a price setting role in the Indian context. The operation is the highest cost in the country and marginal costs increase rapidly above average costs once production volumes rise above ~6.0 Mt, as high priced natural gas is required to support these higher levels of production.

As such, at a current natural gas price of $9.5 /GJ, we believe there is little potential for Hazira to operate above ~6.0 Mt/y crude steel – even though there is no physical bottleneck to achieving higher volumes – as the market would not be able to support the required higher prices. Any attempt to lift prices – and production – would likely elicit a response from other producers in the country or would attract imports. Under strong market conditions, there is potential for Hazira to lift production volumes, but these conditions are unlikely to be sustainable.

If Hazira was able gain access to natural gas at a lower price of ~$5 /GJ, we believe there would be potential to operate at higher volumes. However, the implications for pricing in the Indian market would be negative, given the overall lower costs of the Hazira site and the availability of additional material. Under these conditions, profitability of the Indian industry more generally would deteriorate.

Essar Steel previously had plans to improve the cost competitiveness of the Hazira site through an investment in coke making capacity. Hazira currently purchases all its coke requirements from 3rd party providers and, under current and expected future coke market conditions, this disadvantages the operation from both a cost and an operational perspective. However, any investment that reduces costs at Hazira are also likely to see prices in the Indian market fall, given its price setting role. As such, Hazira itself may not see the full benefits of such an investment and profitability of the Indian industry is, again, likely to deteriorate under this scenario. Only if costs can be reduced to significantly below the next highest cost producer, JSW Dolvi, is Hazira likely to benefit more fully from lower costs, however, given current plans, costs at Dolvi itself are expected to fall in the coming years.

Conclusion
Essar is the highest cost producer in Indian context and is a price setter in the domestic HR coil market. At a current natural gas price of $9.5 /GJ, its marginal costs increase rapidly above average costs once production volumes rise above ~6.0 Mt and this severely limits its production capability beyond this volume. As such, at this natural gas price, there is little potential for Hazira to operate above ~6.0 Mt/y under steady-state market conditions, even though there is no physical bottleneck to achieving higher volumes. Only under strong market conditions are prices likely to be able to rise sufficiently to support higher production volumes, but these conditions will not be sustainable.

A lower gas price of ~$5 /GJ would allow Essar to achieve its full capacity capability, but we believe this would structurally lower HR coil prices in India – and reduce industry profitability in the country – due both to lower costs at Hazira and greater material availability.

Whilst Hazira remains a price setting operation, any attempt to lower costs at the site could lead to structurally lower prices in India and this will limit the gains from such investments.