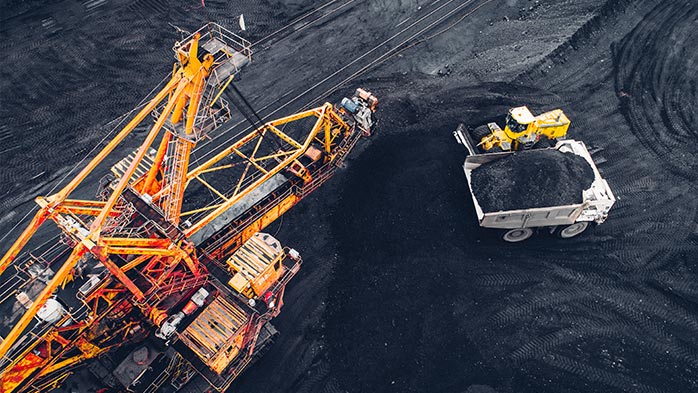 
During the last two years, we estimate that the seaborne industry has generated an average cash-margin of 40% and ~$44 bn in cash and, at the time of writing, profitability remains very strong. Such attractive conditions will not continue indefinitely and, in this Insight, we discuss recent cost inflation in the industry and why this should not be overlooked.

In CRU’s Metallurgical Coal Cost Report 2017, we highlighted the fact that industry costs had increased strongly since the start of 2016 and cost inflation has continued in 2018. After spending fell to ‘bare minimum’ levels during the downturn, companies have made rational choices to loosen this approach; marginal revenues remain very high. Therefore, it is logical for mining companies to produce as much as possible even if this means increasing marginal costs in the short-term. As a result, we estimate that global Business Costs increased by 18% y/y in 2017 as a whole. In 2018, there have been both upward and downward cost drivers, but we estimate that underlying costs continue to increase overall.

Underlying cost trends are particularly difficult to determine in Australia because weather disruption was severe in 2017 and, in 2018, low train availability has caused companies to incur greater costs. Supply chain disruption has resulted in most companies paying more in demurrage penalties and many sites are having to truck coal to satellite stockpile areas as primary yards are full. Financial results for the period 2018 H1 show that unit costs are fairly similar to those in 2017 H1. However, it is important to remember that Cyclone Debbie caused a sharp rise in costs in 2017 Q2 last year. Therefore, costs in Australia may not be significantly higher y/y, but they remain elevated nonetheless.

Elsewhere, companies are continuing to attempt to lift sales volumes and, at most mines, marginal costs are increasing towards marginal revenues in order to maximise profits. For example, Teck has increased the use of contractors and rented more mining equipment in an attempt to sell more in the short-term and this has lifted marginal costs and contributed to a 7.5% y/y rise in ex-works costs. 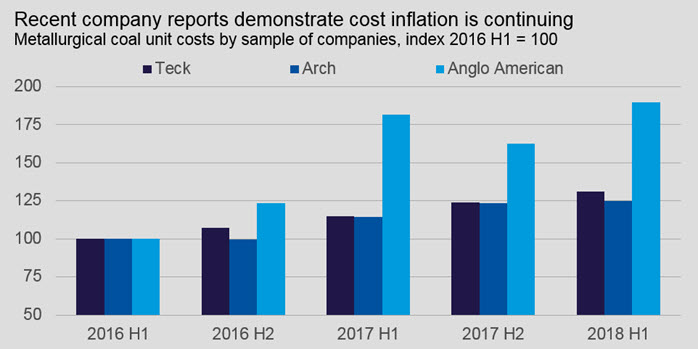 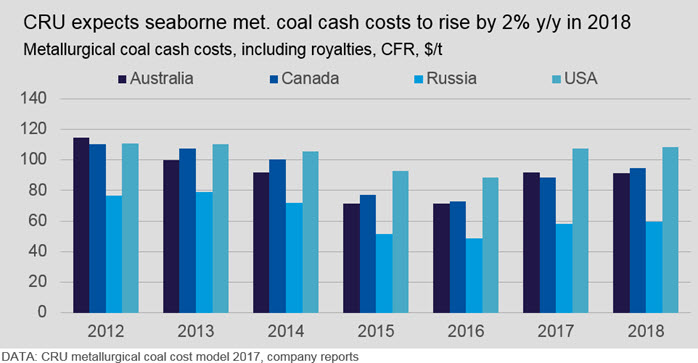 Currency movements help those outside the USA
While mining companies are mostly experiencing upward cost pressure in domestic currency terms, this pressure is being somewhat eased by a continued strong US dollar compared with the majority of the currencies that impact the metallurgical coal industry. These currencies depreciated strongly against the US dollar in 2018 Q2 and currencies remain at extremely attractive levels compared with the last time coal prices were consistently this high (i.e. the period c.2008-2012). 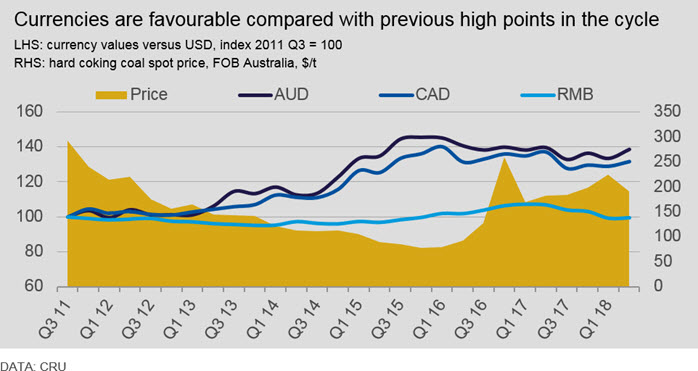 Cost inflation should not be dismissed
Of course, coking coal prices are sufficiently high that cost inflation is not currently a major issue for earnings today. At the time of writing, a number of companies have released financial statements for the period 2018 Q2. Producers with assets largely in the middle of CRU’s global Business Costs curve have earned margins of ~40% in the period and the world’s most competitive producers have generated margins of >55%. That said, rising costs will become an issue in the future as prices will fall.

The chart below demonstrates the historical relationship between hard coking coal prices, the 90th percentile of the Business Costs curve (n.b. CRU’s cost definition that includes sustaining capital and quality and location adjustments to the benchmark price) and the top of the global variable costs curve. This chart can be viewed as a depiction of the classic ‘commodity cycle’ and it also demonstrates the positive correlation between underling costs and prices. 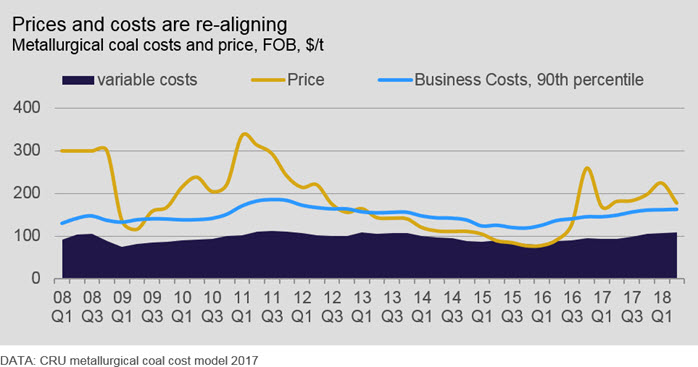 Strong demand growth, supply-side disruption or a combination of the two can cause prices to surge above the 90th percentile of the global Business Costs curve (i.e. above ‘steady-state’ levels). Since late-2016, capacity utilisation in the steel industry has risen and, at times, demand growth for metallurgical coal has been strong. However, global hot metal production declined by 3% y/y in 2017 and 4% y/y in 2018 thus far. Therefore, high metallurgical coal margins since 2016 should largely be attributed to supply-side factors including:

These supply-side factors will not continue to impact the market indefinitely and, in a competitive industry such as metallurgical coal, margins will not remain at current levels. Indeed, even though metallurgical coal exports remain constrained from Australia, prices have begun to re-align with costs as supply from other countries has grown in recent quarters. Higher costs will play a role in future prices and cost control will undoubtedly become a major focus in the industry once again, therefore, mining companies should be wary of recent cost inflation, despite its limited impact on the bottom line today.