CRU estimates that CR imports can continue to flow into the EU at current elevated levels up until end-December before attracting tariffs. We therefore do not expect a meaningful recovery in prices until Q4 at the earliest, where the approaching quota limit and final determinations will come into effect.

EU launch safeguard duties
The European Commission (EC) released details on Tuesday 18 July surrounding the provisional safeguard duties designed to prevent a surge of steel imports into the bloc following the US imposition of steel tariffs under Section 232.

The provisional measures broadly came into effect on Thursday 19 July and take the form of a predetermined quota based on the average of 2015-2017 levels, with an additional 25% tariff on all imports exceeding this (tariff rate quota). CRU understands these quotas are allocated on a first come first serve basis. The measures will remain in place for a maximum of 200 days and are applicable to all countries, except; developing nations that account for less than 3% of total EU imports, countries who currently attract a higher rate anti-dumping or countervailing duty and members of the EEA outside of the EU.

Surging imports weigh heavily on EU stainless prices
There is no doubt that rising import penetration has weighed heavily on EU prices since the start of the year. Indeed, base prices for CR coil declined by around €80 /t over the first five months of the year, whilst in the last two months the situation has worsened noticeably, and it now appears far greater discounts on base prices can be achieved as mills have since moved towards effective pricing in order to remain competitive with cheap Asian imports. Despite strengthening raw material prices and an approximate €360 /t increase in 304 alloy surcharges since January, European mill’s transaction prices for CR304-grade 2mm sheet have only inched higher by €60 /t on average over the same period.

EU CR imports surged by 24% over the first five months of 2018 compared to the same period in 2017. Most notably, imports from Taiwan have increased by 66% ytd and now account for around 23% of total EU CR imports. With the year-to-date landed cost of Taiwanese CR304 2mm sheet to EU ports ranging between €2,200-€2,500 /t (including 6.8% anti-dumping duty, freight and insurance costs), it is not difficult to see why domestic mills have been unable to increase transaction prices much beyond that of €2,450 /t this year.

Tariff Quota Rates imposed on five stainless products
The primary reason behind the EC’s safeguard investigation is to protect against the risk and potential damage caused by redirected imports following the imposition of Section 232 tariffs in the USA. However, the latest trade data available shows limited evidence for this for CR stainless steel. Whilst US CR imports have indeed fallen, this is by only 4% over the first five months of the year, equivalent to just 6 kt. Meanwhile, EU CR imports have risen by 97 kt over the same period. Regardless, the EC have imposed the following provisional safeguard measures on stainless steel: 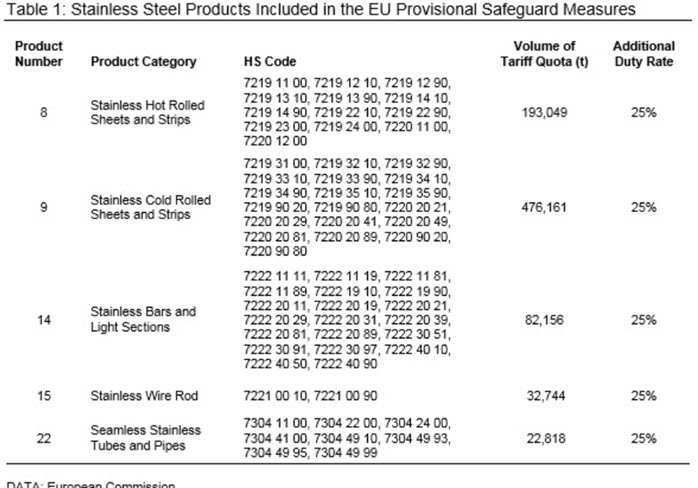 CRU understand that whilst the EC initially announced the quotas will be implemented from 19 July, there is a case by case blocking period, whereby quotas will not be imposed. For stainless steel cold-rolled coil and sheet (product group 9), the blocking period extends to 31 July, which means that any imports on the sea and due to arrive at EU ports up until this date will not be counted as part of the quota allowance.

In the case of cold-rolled, the most notable exemption granted is of course for Indonesia. The country was granted exemption on the basis of it being a developing nation with investigation period volumes less than 3% of total EU CR imports.

CRU understand Tsingshan’s 350 kt/y Indonesian CR plant is now fully operational, with small trial batches of CR coil being tested regionally. With the country exempt from the provisional safeguard measures, this could present a significant opportunity for the low-cost operation to try and capture market share in the typically high-value EU market.

Whilst this initially may seem like an oversight, we need to remember that if CR imports from Indonesia were to ramp up meaningfully, they would ultimately breach the 3% threshold and will trigger a review by the EC. There remains a question over how long this review period will take, although it is fair to assume any significant jump in volumes would be short-lived at best.

Lack of restrictions will limit upside effect on EU market
In agreement with market consensus, CRU do not consider these measures to be restrictive and will do little to curb import supply or support meaningfully higher prices near-term. Using CR coil and sheet as an example, the 476 kt quota is applicable over a 200-day period, although there are no limitations on when, and indeed how fast these imports may flow into the EU. Furthermore, with this quota being filled on a first come first serve basis, we could see a renewed push for imports in order to beat quota limits, although the most likely outcome will be for buyers to continue to operate and indeed import much in the same manner as H1 this year. CRU estimate that EU buyers could continue to import material at current run-rates (based on Jan-May actual data plus estimates for June and July) up until the 30th December before the quota limit is breached. 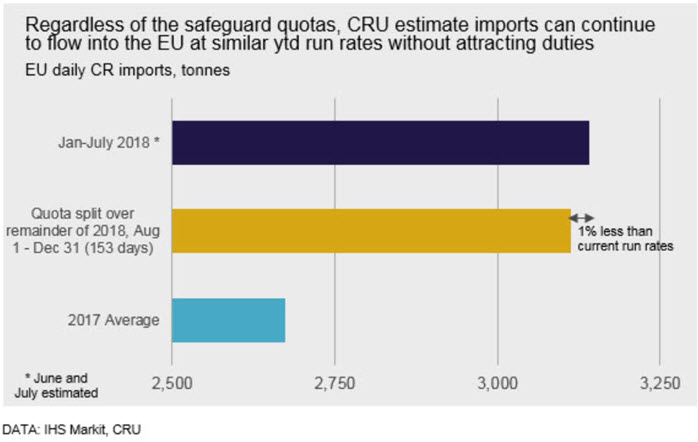 A marginal pull back in H2 demand combined with existing elevated stock levels could reduce import demand somewhat, although at current price levels and with restrictions on imports seemingly non-existent (at least until late-December), CRU expect levels to remain above the 2017 monthly average near-term. To avoid attracting safeguard tariffs altogether, import run rates would only have to fall by less than 1% compared to Jan - July levels, significantly higher than that of 2017. 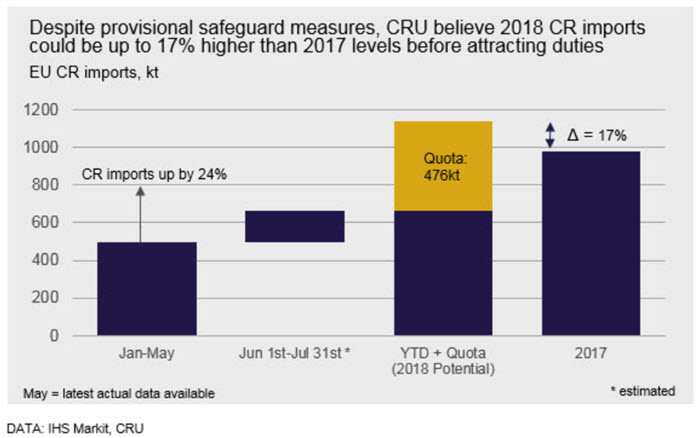 No respite for EU mills near-term
CRU estimate there has been a marginal pullback in import levels in June and July, perhaps due to a combination of seasonal weakness and caution approaching the anticipated imposition of provisional safeguard measures. Whilst this may help to tighten supply somewhat and support prices, we expect this to be relatively short-lived, with imports returning to elevated levels post-summer holidays.

With imports free to continue to flow into the EU without attracting duties throughout much of 2018, it is hard to see a significant uplift in prices occurring until at least Q4. A combination of speculation surrounding the final safeguard determinations, the approaching quota limit and a push by mills to squeeze prices higher for 2019 contracts will likely provide support to prices late this year – although the extent to which they can move higher by will be limited until more significant restrictions on imports are imposed.