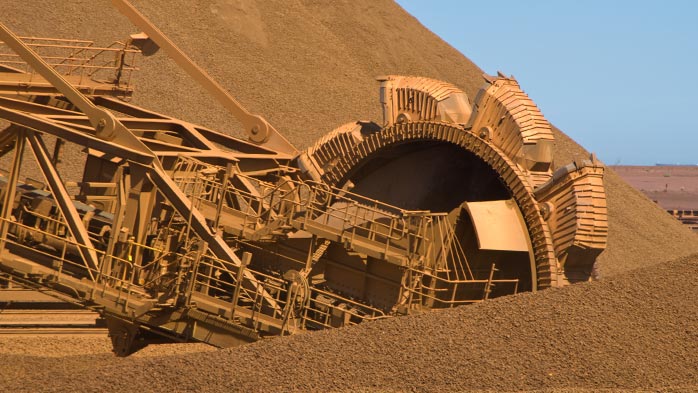 The suspension of several iron ore mines in India has led to a dramatic increase in Indian domestic ore prices – ore imports have lifted significantly and this has put a cap on domestic prices.

The sudden supply gap
Odisha accounts for more than half of Indian domestic iron ore production and, consequently, it is a key supply region for Indian steel mills. Thus, when the recent Supreme Court ruling suspended 7 state mines from 01 January this year, the effect on ore prices was tangible. These mines, which produce ~20 Mt annually, had previously been fined more than $375 M for illegal mining carried out during the period 2000-2010, however, having defaulted on these payments, their mining activities were mothballed until further notice. Banking on a supply tightness, Indian miners immediately lifted ore prices by over 20% from the end-December level and the current, ex-mine, 63% Fe fines price is at ~INR2,700 /t (i.e. $42 /t).

The sweet spot for imports
Under normal supply/demand conditions, Indian domestic iron ore prices are determined by import parity pricing when seaborne prices are below ~$70 /t (n.b. 62% Fe, CFR China basis). However, when the seaborne price is above $70 /t, specific domestic supply/demand fundamentals are the key drivers of domestic price, irrespective of seaborne prices. Essentially, the parity price is that price at which the preference for domestic fines is completely eroded and steel mills find it economical to import ore, as illustrated below. 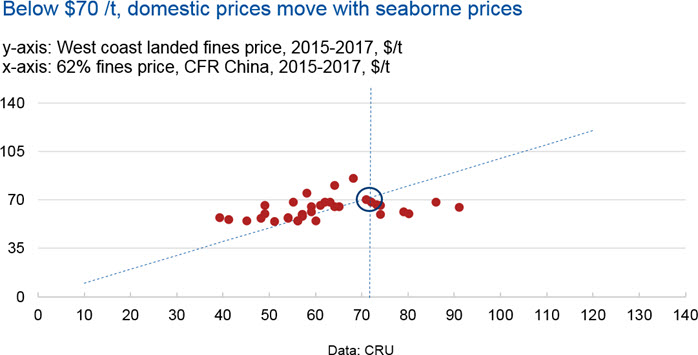 Having said that, currently, Indian domestic ore prices are at parity with import prices even though the seaborne benchmark has sat in the range $74-78 /t over the last few weeks, well-above the parity pricing threshold. The surge in domestic prices to above the threshold is, in our view, driven by the rapid change to supply fundamentals in recent weeks. That is, under the constrained supply scenario, the domestic price has been allowed to lift to above the parity pricing threshold, but has been constrained from lifting further by seaborne prices.

In response, imports of iron ore have lifted to close to 2 Mt in January, more than 4 times the average monthly rate. Indian steelmakers are now familiar with importing ore and will turn to imports as soon as domestic/seaborne differentials open up – this behaviour will ensure that domestic prices remain in step with seaborne prices. As such, we expect imports to remain at current high levels or, indeed, to lift further, whilst prices sit above the parity pricing threshold and domestic prices will now move in tandem with seaborne prices.

Price easing at home can now only be expected if miners that remain in production can compensate for the lost volume, however, this is unlikely. All Indian mines are subject to a production limit that is set for each financial year based on environment norms and, given we are now in the last quarter, most key mines will have little production quota left. Although it is difficult to conduct a mine-by-mine analysis, the surge of imports in January, with more shipments due to arrive in February, reflect the steelmakers’ perspective on the adequacy of domestic supply in the near-term.

Overall, in the short-term, Indian domestic ore prices will remain aligned with seaborne prices and, with the latter forecast to remain at current levels during Q1, imports of ore into India will remain high.

Short-lived price surge for domestic miners
So, Indian prices are at parity with import prices and, based on the CRU price forecast for 2018 Q1, of $75 /t, CFR China, we believe that there is no scope for domestic prices to increase further. Additionally, in the new financial year, starting in April, we believe the government will increase production caps at all mines to eliminate the supply shortage – all other things equal, this will see the domestic iron ore price fall to, at least, the parity pricing threshold of $70 /t. This remains a profitable price point, however, domestic miners cannot rely on this price. That is, as seaborne prices are forecast to fall drastically through the year, driven by additional iron supply coming on-stream in Brazil and Australia, so will domestic prices.

The above chart sets out our view of the trajectory of domestic ore prices, driven by falls in seaborne prices, that imply a drop of 19% compared with prices in 2017 H2. Ultimately, the improved supply/demand balance and fall in prices will also go hand-in-hand with much lower imports of ore.

Steelmaker cost competitiveness
Other than for Tata Steel and SAIL, steelmakers’ costs in India are strongly influenced by domestic ore prices and have increased substantially since the iron ore price hike. The chart below shows how the competitiveness of Indian steel mills has been the most impacted in 2018 Q1 when compared against cost increases incurred by other mills due to the increase in seaborne prices in the same period.

Countering this, a number of mining leases have been auctioned to domestic steelmakers in the last year and the upcoming captive supply will also contribute to improving the domestic supply/demand balance and displace imports. However, the impact from new, captive supply is not expected to be great as, initially, mining volumes are expected to be small. JSW Steel, located in Karnataka on the West coast, is the largest iron ore importer in the country and will especially benefit from captive production. Indeed, the mining limit in Karnataka has been increased from 30 Mt/y to 35 Mt/y this year to provide room for additional production from newly acquired captive mines alongside production from existing mines.

Logistics costs expected to remain at high levels
It’s important to note that logistics costs in India are an important factor for understanding the attractiveness of imports, especially for the more inland consumers. To elaborate, for ore buyers within a coastal state, but situated far in-land, transport costs can add up to $30 /t, tarnishing the attractiveness of lower seaborne prices. The key reason behind high tariffs in India is the subsidisation of passenger freight by goods freight. Additionally, rail infrastructure is inadequate and, consequently, the railway network is burdened by over-utilisation.

Domestic transport costs will continue to a be an important factor in determining the attractiveness of imports over domestic material, however, a structural shift in these tariffs is not expected anytime soon. In fact, any investment in capacity expansion would likely be passed on as a hike in freight costs to fund the investment.

Conclusion
Since 2015, seaborne iron ore prices have moved closer to the import parity price threshold of Indian steelmakers located near the coast and the seaborne price has emerged as an important factor influencing domestic pricing. Indeed, current supply tightness in the Indian market has lifted the domestic price of ore above the parity price threshold, but the seaborne price continues to provide a hard cap – Indian steelmakers are now very comfortable importing ore and their ability to switch to imports ensures that domestic prices remain aligned with seaborne benchmarks. The increase in imports into India to close to 2 Mt in January, more than 4 times the average monthly rate, is testament to this behaviour.

Imports are currently a necessity but, as domestic iron ore supply gradually improves in the new financial year, domestic prices will continue to be affected by seaborne prices, as these are forecast to fall below the parity price threshold of ~$70 /t. In our latest view, the seaborne benchmark price is forecast to decline to $58 /t in 2018 H2 and Indian miners will have to revise down their prices accordingly to maintain competitiveness over imports. During calendar 2018 Q2 and Q3, imports of ore may remain elevated for a time, as steelmakers take advantage of continuously falling seaborne ore prices but, ultimately, imports will lose their attractiveness and should fall to low levels.

Importantly, as seaborne prices drop below the parity pricing threshold of ~$70 /t, CFR China, Indian domestic iron ore prices will align with seaborne prices and steelmakers that purchase the bulk of their ore from the domestic market will lose any cost competitiveness previously associated with ore. As such, access to low-cost captive ore will become a major determinant of steel mill cost competitiveness in the future.