Liberty Onesteel’s Whyalla steelworks is a high-cost producer of heavy rail sections and billet.  The new owners have announced plans for their “Gigawatt Program”, a A$700 M project that will include photovoltatic cells, pumped hydro and batteries.  Our analysis shows that the programme will not affect the underlying cost structure of the site.


The Whyalla steelworks is a 1.2 Mt/y integrated site located in South Australia. The site has been in operation since 1941 and has changed ownership several times over its 73 year operational history. The Whyalla site has made headlines in recent months after being acquired by the GFG alliance, a deal that saw GFG acquire the assets of the now defunct Arrium, with the steelmaking and manufacturing assets formed into Liberty Onesteel and the mining assets incorporated into SIMEC mining. In the months following the acquisiton of Whyalla, GFG also acquired ZenEnergy and quickly announced their “Gigawatt Program”, with plans to build a suite of renewable generation assets including photovoltaic cells (PVCs), pumped hydro and battery storage that will ultimately tie into GFG CEO Sanjeev Gupta’s “GREENSTEEL” vision.

In this insight, we look at the power requirements of the Whyalla steelworks and, using data from CRU’s Steel Cost Model, estimate whether Gupta’s ambitious energy project could have any significant impact to the underlying cost structure of the site.

The Whyalla site produces billet for Liberty’s Australian East coast operations and heavy railway sections.  When viewed on the global heavy sections cost curve, Whyalla is one of the highest-cost producers worldwide, sitting in the fourth quartile of the global cost curve, and we estimate that the cost of producing heavy sections was $604 /t in 2017.  Therefore, for a site such as Whyalla to be competitive, it is crucial for the owners to understand the underlying cost structure – and target cost reductions where possible. 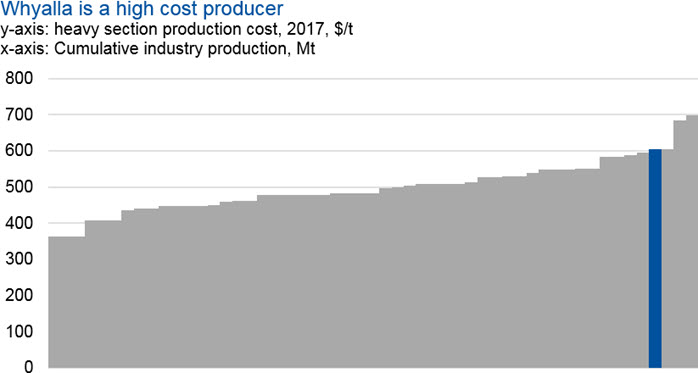 Of the total costs of production, purchased electricity accounts for ~2% of the total cost for both sections and billet production, a relatively minor component of overall costs.  So, why would Liberty be targeting the power supply? 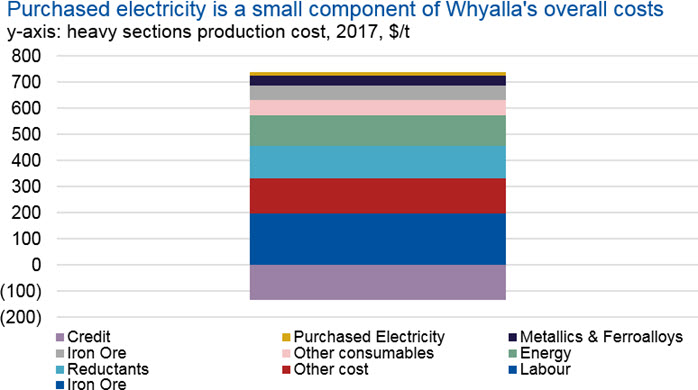 Whyalla’s power problem
The Whyalla site has had issues with its power supply in the past. In September 2016, the site was paralysed after a major state-wide power outage that left the site running on backup power for days. Lost production was estimated at 10,000 t and deliveries to customers were delayed. The outage resulted in several operational issues, such as a chilled hearth and solidifying metal in casters, in addition to safety risks. The site was under administration at the time and highlighted a key issue to bidders – Whyalla’s power supply problem.

CRU estimates that the Whyalla site required approximately 267 MkWh of electricity in 2017 – this approximates to 250 kWh/t of product produced, with the sections rolling mill accounting for the majority of the power consumption. We estimate that the Whyalla site generates up to 40% of its power needs internally through a steam generating set and a natural gas co-gen facility that also utilises waste process gas. This leaves 160 MkWh that needs to be purchased from the grid annually.

Whyalla is one of South Australia’s largest power consumers, CRU estimates that Whyalla purchases electricity at a price of $70 /MWh – taking their 2017 power bill to $11.2 M. This is not an insignificant figure, however, relative to the amount the site spends on raw materials and other operational costs, it is not huge. Power is clearly important to Whyalla, however, given the history of the site and the importance of a stable operation to the productivity of a blast furnace it appears that power security is of higher concern than power prices.

The cost of renewable power
The owners of Whyalla can guarantee their energy security by installing their own power generation capacity. However, on a $/MWh basis, renewable energy sources are still one of the most expensive ways to generate power when subsidies are not considered. The levelised cost of electricity (n.b. LCOE) is a metric that estimates the cost of generating power across the useful life of an asset to give a price per unit of energy (i.e. $/MWh). The LCOE provides a guide for the minimum price at which power from the installation should be sold in order to break even on the investment and the metric can be used to compare the relative cost of power for a range of systems. For this analysis, we estimate a LCOE of $74 /MWh for the suggested 200 MW PVC installation, without subsidy.

Comparing the LCOE of $74 /MWh with Whyalla’s current estimated price for grid power of $70/ MWh, we do not believe that the Whyalla steelworks will see any decrease in their operating costs and overall cost structure in the scenario where power is sourced from their own installation of PVCs, pumped hydro and batteries. In fact, Whyalla could actually see their costs increase slightly. Even if subsidies are provided, lowering the effective LCOE to below $70 /MWh, the small contribution of power to total costs suggests that cost competitiveness is unlikely to change significantly.

More importantly, by our estimates, the Whyalla site would meet its current power requirements with only a 90 MW PVC installation. So, why is GFG pursuing a much larger installation in the first place?

Why the “GigaWatt Program”?
The condition and status of South Australia’s (SA) electricity network is a highly publicised issue in Australia. The state’s renewable energy plan aims to have 75% of its power supplied by renewables by 2025 and this is being achieved in part through the offer of subsidies to renewables projects. However, the addition of solar and wind power into the SA energy mix has resulted in a shift of grid demand – demand bottoms out in mid-morning, as rooftop PVCs begin to kick in, reducing demand for grid supplied power. As a result, power prices in South Australia can sometimes turn negative to incentivise users to relieve the grid of excess power being supplied to the network. This presents an arbitrage opportunity for those who can store power – storage systems can allow the owner to recharge their facilities at times of low/negative prices and to sell this power back to the grid in times of peak demand and high prices. 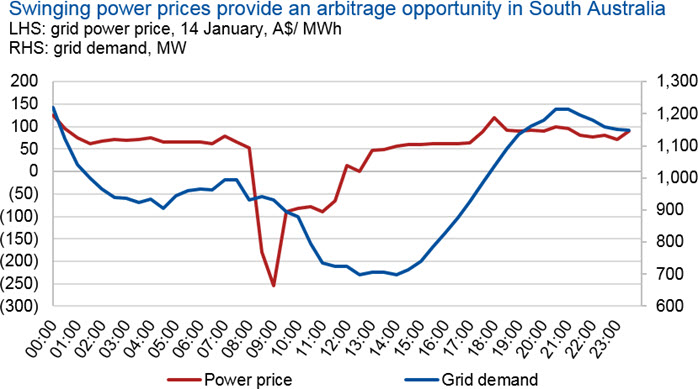 CRU has used historical power prices in SA to try to understand the potential revenues that could be generated from utilising the storage capacity of pumped hydro and batteries, if GFG were to sell the excess power of the proposed solar generation back to the grid. In these calculations, we have assumed the following:

These calculations suggest that annual revenue is likely to be in the region of $30-50 M. As such, the “Gigawatt Program” begins to look like an attractive investment, as the Whyalla site will be able to secure its power supply, whilst excess power can be sold at high prices through the use of the storage capacity.

Based on the information detailed above, we do not believe that the “Gigawatt Program will change the underlying cost structure of the Whyalla site significantly – whilst power is vital to the operation of the steelworks, the contribution of power to overall costs is small. However, the project will provide security of supply in times of outage, whilst providing an additional stream of revenue.

Conclusion
Whyalla is a high-cost producer of heavy sections and billets. The site has had issues in the past with the security of its power supply and a disruption in September 2016 led to a loss of production from both the group’s steel and iron ore operations – highlighting the sites power security issues. However, electricity costs for the Whyalla works are a small component of total costs, contributing approximately 2% only.

GFG have announced the “Gigawatt Program” – an ambitious energy project that includes the installation of PVCs, pumped hydro and batteries. However, based on our analysis, we do not believe the Whyalla site will see a change to their underlying cost structure due to this programme. Having said that, the “Gigawatt Program” will provide security of supply – the cost of an erratic power supply is harder to quantify, but is just as important as securing a competitive power price. Once installed, excess power from the the “Gigawatt Program” could present GFG with an additional revenue stream in the range of $30-50 M/y.