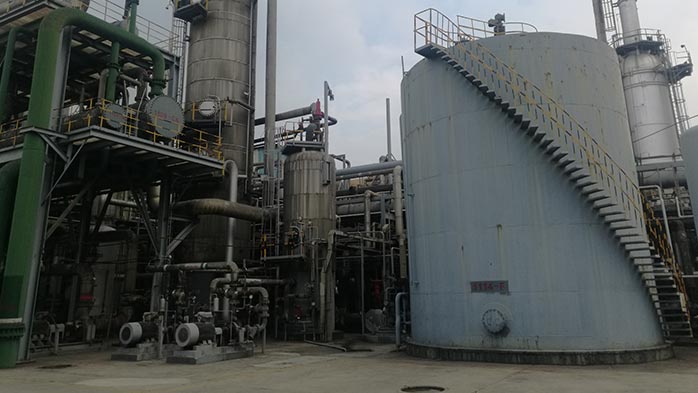 China is arguably the most important country for the urea industry, accounting for 34% of global urea capacity and 10% of global trade in 2019.


Chinese exports are also more influential than the volume alone suggests, as they supply the marginal tonnes to the market and as a result set the floor price of urea globally when the market is oversupplied.

While natural gas is the primary feedstock for nitrogen producers around the world, most Chinese nitrogen capacity uses coal (anthracite and bituminous) as feedstock, meaning it is exposed to China’s increasingly strict policies around air pollution and the environment. In September 2019, analysts from CRU’s nitrogen team conducted a tour of Chinese nitrogen plants in the provinces of Anhui, Sichuan and Yunnan, to research how these policy changes are influencing urea output and future investments.

The nitrogen industry in China is undergoing a restructuring process. The strict environmental mandates outlined above are hitting high-cost, anthracite coal-based producers hardest. The regulations necessitate permanent capacity closures, idling of capacity during the winter-heating season and significant capital investments to switch from fixed-bed gasification technologies to more energy-conserving technologies.

The strict environmental controls have incentivised new supply among the lower-cost, more efficient bituminous coal-based nitrogen producers, with Chinese ‘marginal’ urea exports expected to be increasingly supplied by these producers. These plants are lower down the cost curve and present downside risk to global urea prices. This insight highlights the key takeaways from CRU’s site visits and our expectations for the Chinese urea market going forward.

More efficient low-cost coal, not natural gas, is replacing anthracite coal capacity
Fertilizer producers in China have come under increased scrutiny on emissions and pollution over the last five years. Despite lower commodity prices and a slowing of economic growth in China more recently, this scrutiny remains in place. The Chinese government has now implemented a range of policies affecting the nitrogen industry and producers are investing more to control their emissions. Permanent capacity closures are expected to accelerate in the near-term as a result.

Other producers in the region have also been hit by strict environmental restrictions, with permanent capacity closures of anthracite-coal based capacity being recorded. Similar to Haoyuan Chemical’s relocation mandate, other producers are also attempting to commission replacement trains based on bituminous coal. This development is pivotal to future marginal costs as the cost structure in China is shifting to a lower cost base, linked to bituminous coal prices.

The changes described above are taking place at a rapid pace, and China’s reliance on the various nitrogen feedstocks is being overhauled. In turn, the make up of the urea cost floor globally is changing. This underpins the importance of understanding energy feedstocks for nitrogen capacity in China, something CRU has built in-depth knowledge on over the past ten years. This breakdown is elaborated on further in the insight.

Complexity of China’s winter heating season is pivotal to exports
The winter heating season in China is the period between November and March each year when domestic residential heating is prioritised by the Chinese government owing to the colder weather. In order to allocate enough natural gas and coal supply to these efforts, industrial consumption of gas and coal is restricted by the government at key points in the season. The measures also contribute to lower industrial pollution in large cities over the winter heating season, something which dramatically improves air quality. These efforts have hit the nitrogen industry, as a heavy user of energy feedstocks, and seasonal plant shutdowns have now become a regular fixture.

Gas-based producers in China, particularly in the South West are forecast to experience gas price increases in the 2019/20 winter heating season, in a similar fashion to the 2018/19 season. But gas supply is reported to be better this year. This is expected to enable gas-based urea producers to operate at higher rates and idle operations for fewer months. For instance, the YTH plant visited in Yunnan idled its plant for 3 months in the winter of 2017/18, but downtime was less than a month in 2018/19. Engineers CRU spoke to at the site had expectations of a similar short downtime for 2019/20.

However, emissions controls on coal-based nitrogen plants are expected to be severe over the coming winter period. Controls on producers tend to be most stringent in the “2+26 cities” area in Eastern China, which covers the municipalities of Beijing and Tianjin plus 26 other cities in four provinces. This area is targeted because of its significant contribution to overall emissions, however local governments in surrounding regions are also likely to maintain policies targeting air quality and dictate operating days.

As shown in the left-hand chart below, the production limits that have been stepped up in recent years have had a positive impact on air pollution over the winter heating season since 2016. The right-hand chart demonstrates the impact of a change in strategy by the Shanxi government during the 2018/19 winter heating season. Having seen improved air quality in the 2017/18 season, the provincial government decided to take a more relaxed approach to winter heating measures. However, the higher industrial production in the province led to an emissions spike in January 2019, as highlighted in yellow on the chart. This reinforces the importance of winter shutdowns in energy-intensive industries to improved air quality. Going into the current 2019/20 winter season, the Shanxi government has implemented stricter controls on the nitrogen industry, signalling a move back in line with its previous approach.

Nitrogen plant shutdowns during the winter period does not necessarily mean lower Chinese urea exports and production, netback margin relative to other industrial products is also important. Anthracite coal-based producers equipped with fixed-bed gasification technologies are likely to prioritise shutting down gasifiers used to produce methanol and other chemicals, while continuing to produce nitrogen fertilizers given the higher returns on urea. Operating rates are expected to decline to 65% in Q4 2019, lower than the estimated 67% rate in Q4 2018, but the urea market is still expected to be over-supplied as China has volumes on offer for export in Q4 2019. 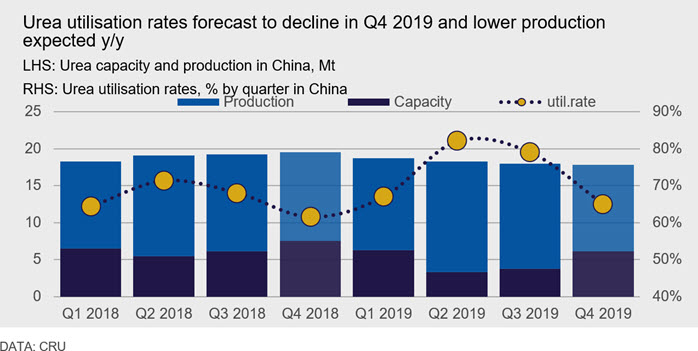 Evolving feedstock structure in China changes medium-term outlook for exporter cost floor
China is estimated to export 4.8 Mt of urea in 2019, more than double the volume exported in 2018. Lower domestic demand, declining coal prices and a depreciating renminbi on the back of the US-China trade war have all incentivised higher Chinese exports. However, marginal Chinese exports in 2019 have not been supportive of the urea market with prices falling below the cost of production for many inefficient anthracite coal-based producers in China in Q4 2019.

Higher-cost anthracite coal-based exporters are not offering product for the export market and instead most exporters form part of the bituminous coal-based asset base. As such, they can compete in the seaborne market and make positive margins. This, together with declining domestic prices in China in Q4 2019, has added downward pressure to global urea prices. 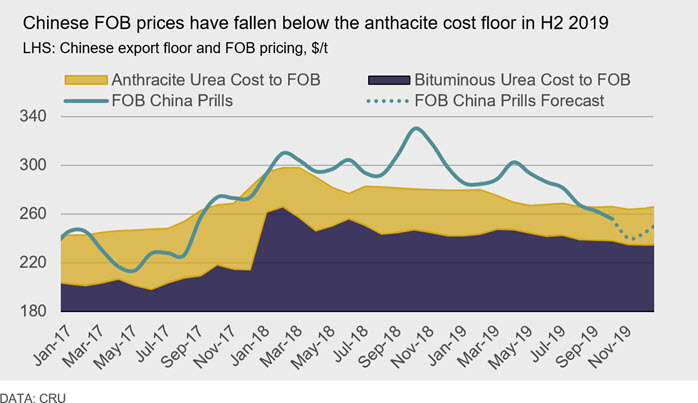 Chinese exports are forecast to decline to 4.1 Mt in 2020 and fall below 4 Mt through to 2023. The rate of closures at older, inefficient facilities will outweigh the rate of new capacity additions over this period. Environmental protection and improved efficiency measures have started to change the cost structure for Chinese exporters. In 2018, 46% of exports from China originated from anthracite-based producers, whereas in 2019 CRU estimates the share has declined to 30%.

CRU forecasts this trend to continue, as by 2024 less than 24% of the capacity in China will be based on anthracite coal, compared to 36% in 2019. Bituminous coal-based producers were responsible for 36% of exports from China in 2018, but this has increased to 54% in 2019. This growth in the share of exports is set to continue throughout the medium-term, as CRU forecasts that 80% of new capacity commissioning in China will be based on bituminous coal. Bituminous costs to FOB range between $40-90/t lower than anthracite exporters, which has implications for the traded market as marginal tonnes from China are pivotal in setting the global price floor, especially outside of its domestic demand season. 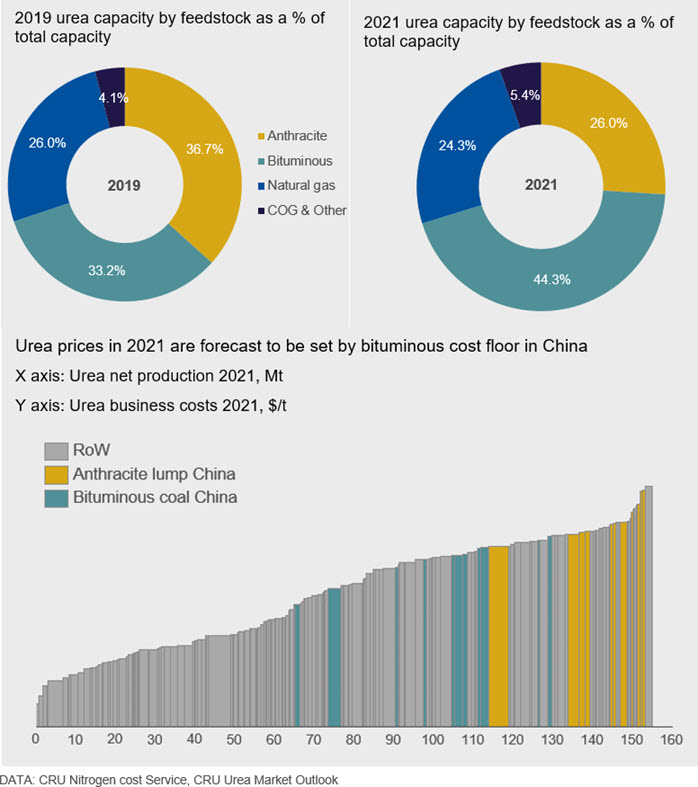 The changing make-up of Chinese nitrogen plants by feedstock is one of the most important developments facing the industry in the next 2-3 years. The switching of China’s urea capacity base from majority-anthracite to majority-bituminous coal has significant implications for the international market due to the role of the cost floor as outlined in this insight. This means that the degree to which producers adhere and adapt to emissions and efficiency mandates from the government will be pivotal. In most countries around the world the scale of change being required would pose a challenge, but in China, where the industry is made up of many small and medium-sized producers, it is a complex and delicate balance.

CRU conducts regular site tours of the Chinese nitrogen market, helping us to cross-check and calibrate our forecast assumptions. CRU’s fertilizer presence in China is led by Principal Analyst, Gavin Ju. The findings from regular CRU site tours in China and beyond are integrated into our quarterly market outlook reports and our cost services.