Indian stainless flat import probe and rationale behind it 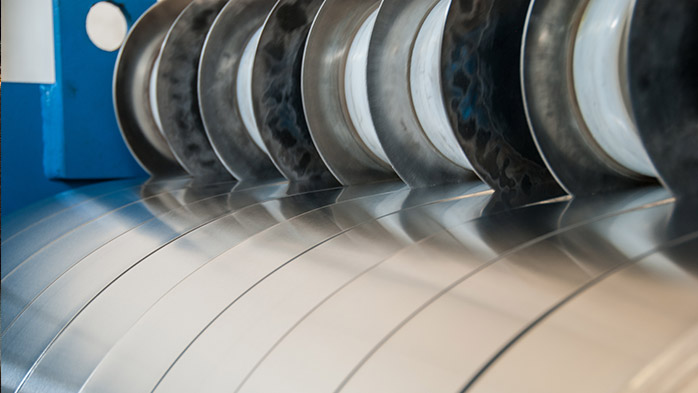 
This insight explores the reasons that led to the Indian government considering import restrictions and their possible implications.

The period of investigation is April 2018 to March 2019, while the injury investigation period will cover the periods FY15/16, FY16/17, FY17/18 and FY18/19. Affected parties have 40 days from the day of initiation of investigation to comment on the application and initial findings presented.

Reasons leading to this investigation
The Indian government’s decision to consider the request of the domestic stainless steel industry to probe into imports of stainless steel (SS) flat rolled products is a consequence of sustained imports into India despite substantial growth in local supply (7% CAGR between 2014-2018).

Indian SS-CR coil imports have exceeded 300 kt /y in the past five years, despite growing domestic production. In fact, in 2019 Q1 CR coil imports reached 96.4 kt, the highest quarterly level since 2017 Q3. A significant contributor to this increase was Indonesia, imports from which tripled on a y/y basis (59% q/q) in 2019 Q1 to 14.6 kt.

In 2018, CRU estimates the country’s SS-CR coil apparent consumption to have been 2.32 Mt. India imported 0.35 Mt of SS CR coil during the year, suggesting an import penetration rate of just over 15%. This is quite high, considering that domestic SS-CR coil producers operated at an average capacity utilisation of 80%, having exported 0.14 Mt (or 7% of their total output). 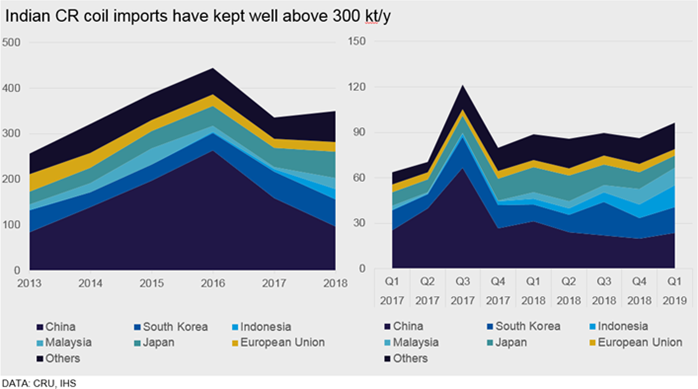 Meanwhile for SS-HR coil, although India is a net exporter by a few thousand tonnes; the market share of Indian producers has been challenged due to a surge in Indonesian SS-HR coil supplies since 2018 Q2. Indonesia exported 25.5 kt of SS-HR coil to India in 2018, displacing China as the largest exporter of the product to India. In 2019 Q1, Indonesia exported close to 16 kt of SS-HR to India. CRU understands that these Indonesian exports may be linked to the 600,000 t/y SS-CR line being constructed in Gujarat by Cromo Steels Private Limited, a joint venture partly owned by Chinese major Tsingshan Holding Group. Tsingshan has integrated stainless steel manufacturing operations in Indonesia, which started production in 2017 with a 3 Mt /y SS-HR rolling mill. Tsingshan’s Indonesian operations also include a 0.7 Mt /y SS-CR mill. 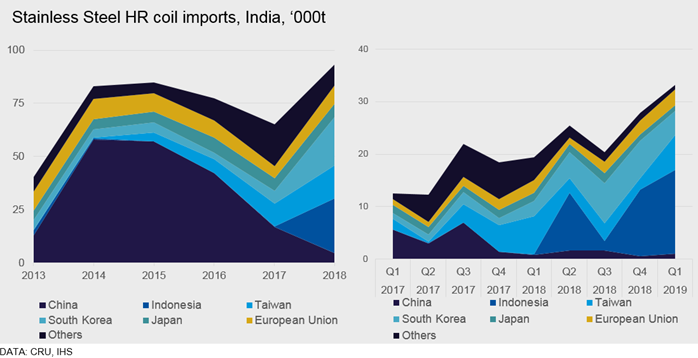 Steelmaking investments at stake due to threat of dumping
There is fierce competition between domestically produced stainless and imported material, particularly SS-CR coil. As of late there has been a sharp rise in Indian imports from Asian countries ex-China. While imports could be in part attributed to Tsingshan supplying its JV ahead of commissioning, there may be also instances of trade circumventions. This investigation, thus, provides an opportunity for the Indian government to detect instances of circumvention in the country’s seaborne trade of stainless steel flat products, while also gathering evidence of dumping, if any.

Whilst the investigation covers several countries (representing over 99% of Indian FRP imports in 2018), there is a strong likelihood that only a few of them (mostly Asian countries) will be targeted. The outcome of this investigation is expected to have an impact on medium-term stainless steel FRP investments, particularly from Jindal Stainless, who plan to double their SS-CR coil capacity in Odisha over the next couple of years.

Potential AD duties would boost sentiment in the domestic SS industry, especially after the FY19/20 budget on 5 July did not grant the request for a hike from 7.5% to 12.5% in the basic import duty on stainless steel finished products. Instead, the government raised the import duty on stainless semi-finished products (HS code 7218) from 5% to 7.5%.