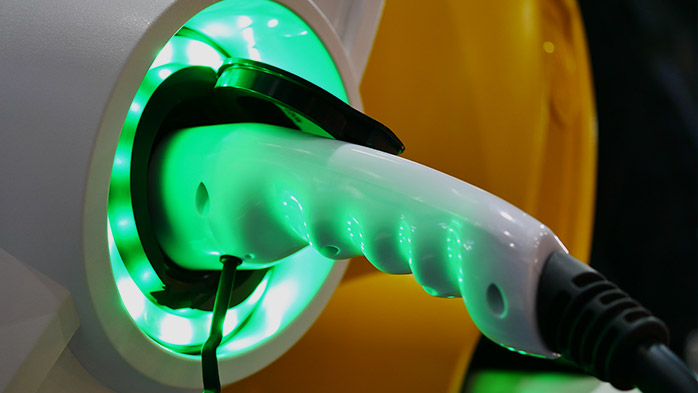 Lithium prices have steadily declined since the end of Q1, finally crashing through the $10/kg LCE mark at the end of July. Weaker-than-expected demand in China is partly responsible, but the main driver has been the ongoing avalanche of new supply into the market, as plentiful cheap spodumene meets ample conversional capacity in China.

Many market players continue to forecast long-run prices for lithium in the mid-teens LCE, citing refinery bottlenecks and the potential for ramp-up delays in the mining and refining sector. Based on previous experience in other commodities, CRU finds this argument unconvincing. We continue to forecast that lithium prices will be governed by cost fundamentals and that this will result in sustained lithium prices in the single-figures – the same message which we have continually conveyed to CRU clients since November 2017.

Lithium carbonate prices in China have dropped by nearly 20% since the beginning of 2019 to RMB 65,000/t, equivalent to $9.25/kg LCE. Lithium hydroxide has fallen by 30% to RMB 74,500/t, according to CRU’s price assessments. China is the world’s largest user of lithium, accounting for 57% of global demand in 2019, and is also the biggest supplier of lithium converted products. Many market players look to Chinese lithium spot prices as a bellwether of market health and therefore the continued decline of lithium prices in China has put mounting pressure on the global lithium market. 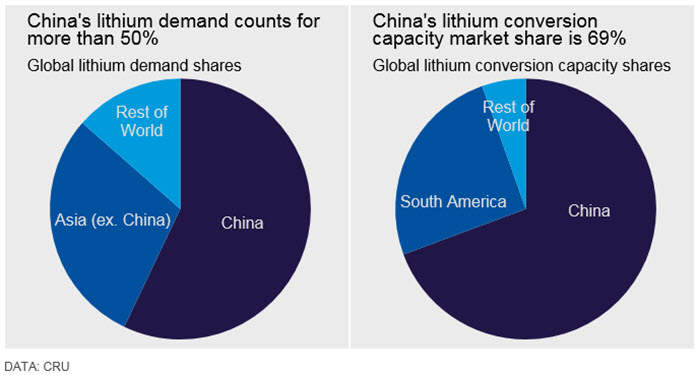 CRU calculates that the Li-ion battery sector accounts for 60% of lithium demand in China, of which EV and portable electronics have the largest share. Portable electronics have long been the mainstay of lithium demand – but with 4G handsets now representing 95% of domestic sales, market saturation has resulted in mobile phone sales through to July dropping by 5% year-to-date.

But the real driver of lower lithium demand has been disappointing BEV uptake. Chinese EV sales through to July totalled 696,000 this year, an impressive 41.5% y/y increase but nonetheless lower than expected by the market. There are two main reasons for this:

- Shrinking automotive sales: the accumulated auto sales in China have dropped by 11.5% in July based on official CAAM statistics. Many OEMs and dealers have engaged in huge marketing events for traditional cars and offered large discounts to consumers.
- Sharply decreased subsidies for EV: China introduced its new subsidy policy for electric vehicle sales in late March 2019 which was much lower than expected, with EV subsidies declining by 50-55% in 2019 on average. CRU has published a detail analysis on the topic and its effect on battery metals, which can be accessed here: China EV subsidies face major decline in 2019.

China’s lithium industry is probably one of the country’s most market-oriented sectors, with two major non state-owned companies leading the market: Tianqi Lithium and Ganfeng Lithium. However, the combined conversion capacities of these two market leaders is below 30% of total Chinese capacity. The rest of the lithium market is very fragmented, with no individual entity commanding a large amount of pricing power. This makes the market extremely cost-driven in practice. In addition, Chinese converters continue to expand aggressively, with Tianqi Lithium claiming to have capacities of more than 100,000 LCE by 2020; and Ganfeng lithium aiming for 200,000 LCE by 2025.

CRU expects to see some marginal improvements on the demand side in the coming months as Q4 is generally a busier buying season. However, we nonetheless believe that low spodumene prices – discussed below – and ample conversion capacity will cause prices to continue their decline in the short-term.

Another key factor which has contributed to the decline in lithium prices is the surge in mine supply. The price explosion in 2016-2018 prompted widespread interest and investment in lithium projects across the world as hard rock mining came to the fore. Nowhere is this more the case than in Australia, where six spodumene mines have commenced production in just three years – much faster than expected and consolidating the country’s position as the world’s leading producer of mined lithium units.

The subsequent influx of spodumene concentrate has pulled prices significantly lower since H2 last year. The latest indications suggest that 6% spodumene concentrate contract shipment prices are trading at around $600 /t CFR China – having been above $1,000 /t in Q3 2018 – with spot prices reportedly even lower. It has long been our view that production cutbacks and project postponements would come about amid the lower-price environment. These curtailments have started to materialise with a number of leading lithium miners – including Pilbara Minerals, Albemarle and Alita Resources – either implementing or suggesting future moderation of mine production. For more information please see our insight from last month: Lithium miners blink first in face of falling prices.

Despite these cutbacks our mine supply forecast remains plentiful over the next few years, and it will likely be a similar story looking further ahead. CRU’s comprehensive mine supply database contains case-by-case production estimates for 101 assets including current operations, brownfield expansions and greenfield projects over the next five years. Each asset is given a classification (operating, committed, probable, possible, speculative and on hold) based on its development status and likelihood of reaching production, with production weighted accordingly. Given the strength and abundance of the project pipeline, we are conservative with our assessment of projects’ viability and the supply weighting of different classifications. Early-stage projects will struggle to secure financing in the interim because of the short-term pricing picture, which will likely hinder their development for the foreseeable future. Expansion phases proposed at existing Australian operations may also be delayed and will be heavily reliant on the utilisation rates of the first production stages.

CRU’s lithium cost analysis combines our experience in costing hard rock mining operations across numerous metals with our extensive potash market research for brine costing. Using our cost model, we can observe how different percentiles and the cost of the marginal tonne are expected to trend over time, and which projects may be unviable over the forecast period. 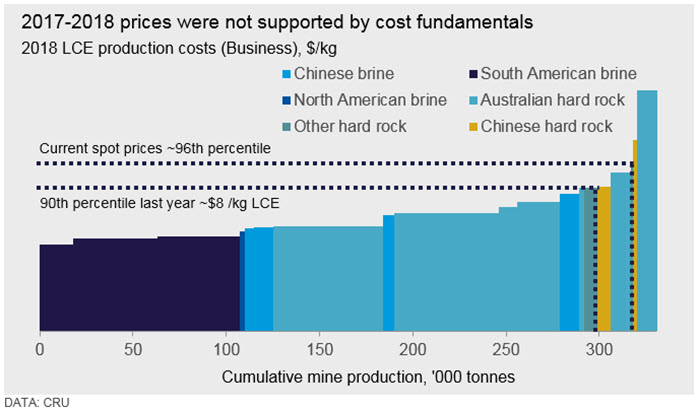 We assume that long-run prices should fluctuate around the 90th percentile in a relatively balanced market. Our current estimates for 90th percentile spodumene production costs are currently around $525 /t, equivalent to around $8,000/T LCE. The 90th percentile will naturally rise over time as longer-term demand requirements will necessitate higher-cost hard rock projects to enter the market, but our long-run cost modelling does not suggest that this would necessitate prices returning to 2017-2018 levels. Conversion costs are also a significant element of lithium carbonate production, but we expect these to ease as capacity scale increases and further processing advancements are made. It is because of this that long-run lithium carbonate costs are unlikely to trend in the teens as has been widely claimed.

The purported “refinery bottleneck” will not save the lithium market

Not all market players share our view that lithium prices in the teens are fundamentally unjustifiable in the long run. Since 2018, many market participants and analysis agencies have continued to claim that mid-teen prices of lithium carbonate are the “new normal” for lithium. The rationale for this view appears to be that lengthy qualification periods for new suppliers and chemical expansion delays will cause bottlenecks in refined supply. Many argue that despite sliding spodumene prices and a clear over-abundance of feedstock, this “refinery bottleneck” will be sufficient to keep prices elevated in the long-term.

We find the “refinery bottleneck” argument largely unconvincing. Conversion capacity ramp-ups do appear ambitious, with Chinese carbonate production capacity expected to increase at a 2019-2024 CAGR of 9.8%. But the Chinese refinery sector has proven time and time again that if conversion arbitrages are sufficiently high enough, they can ramp up conversion capacity at a tremendous pace.

CRU has seen this exact scenario play out again and again in the Chinese commodity space. Cobalt sulphate, another critical battery chemical, went through this exact same cycle in 2017. At the time, the battery market was faced with a shortage of cobalt sulphate production capacity – and despite an oversupply of feedstock, the cobalt sulphate premium over cobalt metal reached close to $10/lb. However, fast forward two years and the dramatic expansion in cobalt conversion capacity that we have seen in China has made cobalt sulphate converge rapidly to cost-driven prices of around a $1.50/lb discount to cobalt metal, reflecting the relative manufacturing costs of the two materials. At the time of publishing, cobalt sulphate is priced at a $2.75/lb discount to cobalt metal. Similar comparisons can be found by looking at the Chinese molybdenum market during the roasting capacity shortage in the early-2000s, or aluminium and copper refining throughout the last two decades. 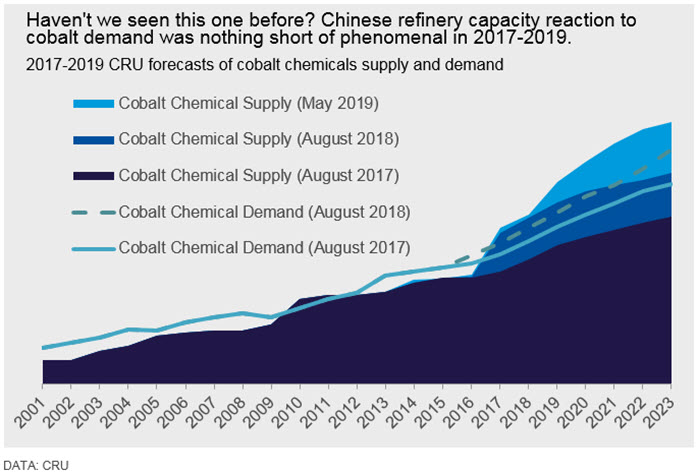 CRU continues to forecast strong lithium demand growth as a result of the worldwide roll-out of electrified vehicles, and our 5-year demand forecasts are not materially different from that of other market participants. But strong demand does not immediately translate into high prices, and long-term lithium prices will be governed by cost considerations which place them much lower than 2017-2018 levels. While refinery bottlenecks could cause some short-term volatility in lithium prices (like in all commodity markets), they will not be enough to cause sustained high prices at unjustifiable levels.

2019 marks 50 years of CRU leading the world in metal and mining commodity research – and if CRU has learned anything in that time, it is that the reality of supply cost fundamentals will always eventually triumph over market hype. The lithium market is no different in that regard.

If you would like to discuss CRU's long-term price view in more detail, please get in touch.