The oil and gas sector is a significant, albeit hugely volatile, source of molybdenum demand.


While short-term volatility in oil prices – which is often heavily driven by geopolitical factors, as observed last week – does not have an immediate impact on molybdenum prices, broader-scale oil market movements have much more of an influence. The oil and gas sector will remain the mainstay of global molybdenum demand over the next five years, particularly in North America as shale oil production continues to rise.

Oil and gas is the biggest source of molybdenum demand volatility
The oil and has sector has traditionally been the largest and most volatile end-use sector for molybdenum. Consumption from this industry depends largely on demand for molybdenum-bearing oil country tubular goods (OCTG) products, which is predominantly driven by investment in the construction of oil rigs, platforms, refineries and pipelines.

This investment in the upstream portion of the crude oil supply chain tends to correlate well with the oil price. When the Brent crude price remained consistently above $100 /bbl in 2011-2013, this sparked a significant increase in demand for molybdenum. Consumption from the oil and gas sector rose to 106 Mlbs in 2011, equivalent to 20% of total molybdenum demand. However, the oil price crash in 2015-2016 resulted in a significant drop in molybdenum consumption. Demand fell to just 80 Mlbs in 2016, just 15% of total molybdenum demand. 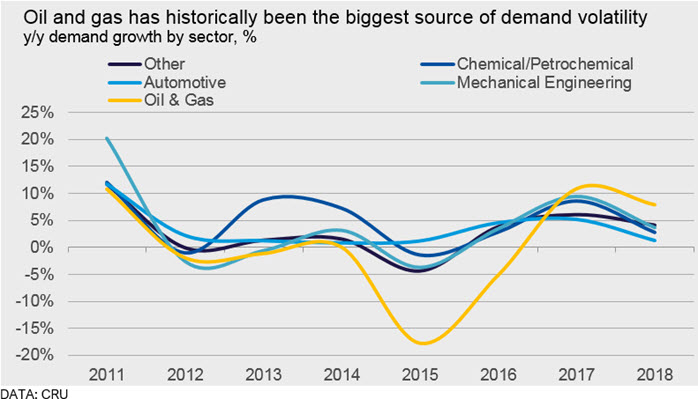 This steady recovery in oil prices has played a major role in boosting molybdenum demand. CRU estimates that molybdenum demand from the oil and gas sector grew by 8% in 2018, following 10.9% y/y growth in 2017. This contributed to the 4.1% y/y growth in overall global molybdenum consumption last year. The strengthening demand, combined with concentrate shortages in China, pushed moly prices into double-digits for the first time in over three years during 2018 (see graph below).

The relationship is largely resistant to smaller-scale oil price volatility

Brent crude hits six-month high as US ends waivers for Iran oil imports…
Brent crude oil prices have steadily recovered in 2019 to around $70 /bbl since falling to $50 /bbl at the end of 2018. But prices rallied to a six-month high last week, approaching $75 /bbl. The rise came as the US announced an end to sanction waivers on Iranian oil imports. These waivers had been put in place last November when the US placed fresh sanctions on the Gulf state, after President Trump withdrew from the Iranian nuclear agreement on 8th May 2018. China, India, Japan, Turkey and Saudi Arabia will not be covered by the waivers from later this week and could face US sanctions if they continue to import Iranian oil. Disruption of Russian crude oil into Europe because of concerns about quality also lent support to the price gains last week. 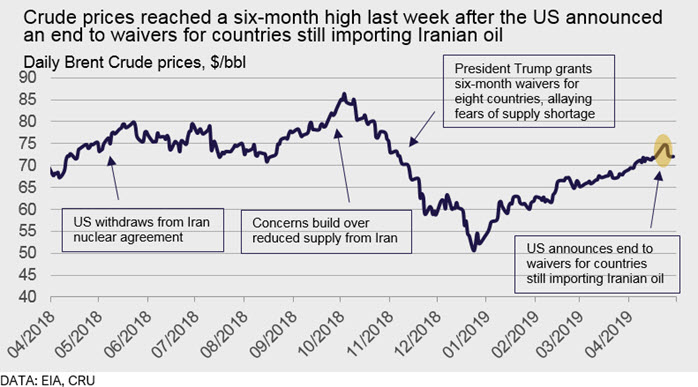 …but this has had little effect on molybdenum prices
It may be intuitive to think that the spike in oil prices would cause a kneejerk reaction in global molybdenum markets, given the importance of the oil and gas sector. However, this has not been the case over the past week – molybdenum prices have remained relatively steady over the past month or so. We understand that most Western consumers are currently well-stocked and spot demand is subsequently limited. In addition, prevailing sentiment from other end-use sectors remains weak, notably the automotive sector. This seems to be offsetting the higher oil prices. Indeed, we believe that current bullishness in the molybdenum market is more attributed to concerns over weakening by-product supply from South America, rather than a sharp pickup in demand.

Another reason for the lack of reaction is that molybdenum consumption in the oil and gas sector is already fundamentally healthy. The Baker Hughes US rig count remains around 1,000 after exceeding this threshold in April 2018. The rig count had previously not reached this level for around three years (see graph below). Although Brent crude prices have since dipped back towards $70 /bbl – after President Trump called for members of OPEC to boost output to soften the effect of the Iranian sanctions – prices are still much higher than during the crash of 2015-2016.

This indicates the longer-term nature of the underlying relationship between oil prices and molybdenum demand and prices. Short-term volatility in oil prices is rarely mirrored in molybdenum markets because of the abundance of long-term contract agreements between suppliers and consumers. However, it can often be used as indicator for spot activity between traders which can influence prevailing market prices.

Prospects are strong for future molybdenum demand from oil and gas sector
CRU’s forecast for Brent crude prices in 2019 remains at a year-average of $68.50 /bbl despite the volatility of the past week. Declining global growth expectations and high inventories are weighing on market sentiment and the outlook for the year ahead. But molybdenum demand will remain strong – we expect the oil and gas sector to reclaim its position as the largest end-use sector for molybdenum demand this year, having dipped below chemical/ petrochemical applications since the price crash of 2015.

Beyond 2019, CRU’s view on the oil market is largely positive and we expect Brent crude prices to rise over the next five years. This is broadly due to the following factors:

A significant driver of future demand from this sector will be the growth in pipeline capacity. This is particularly pertinent in the US, where the rapid development of production from shale oil in the Permian Basin has seen the country become the world’s largest oil producer in recent times. The country's oil production breached 12 million barrels per day in February and is likely to rise further, with major oil companies lifting their respective production estimates from the Permian Basin for the 2020s.

But natural gas prices in the Permian Basin traded below zero for several weeks in early April because of insufficient pipeline capacity. Some drilling companies are being forced to pay those with spare capacity to transport surplus gas. This all points to the need for new pipeline installations to avoid further bottlenecks in the supply chain, and will boost demand for molybdenum-bearing OCTG products.

In addition to this required growth in pipeline capacity, future development of rigs in deep-water and corrosive reservoirs will increase global demand for corrosion-resistant alloys in the upstream oil sector. More stringent environmental legislation in vehicle and marine sulphur emission standards will also increase the requirements for hydrodesulphurisation and CoMoX catalysts. This downstream demand will supplement molybdenum consumption in the oil sector.

Conclusion
The oil and gas sector is clearly a vital driver of molybdenum demand. Molybdenum consumption has historically tracked wider price movements and prevailing sentiment in the oil market, with the revival in molybdenum demand of recent years following the recovery of oil prices. Brent crude prices spiked to a six-month high last week because of geopolitical events, but this has seemingly had little effect on global molybdenum markets – reiterating the longer-term relationship between the two commodities. This will continue to be the case over the next five years as rising Brent crude prices lift molybdenum demand further.