The year of lower growth and modest stimulus 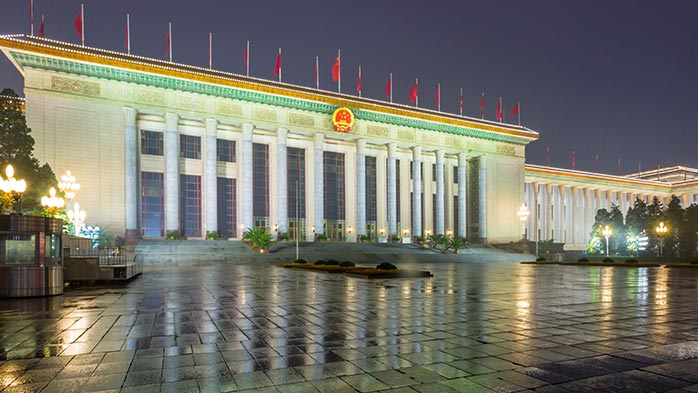 This week marks the start of the most important policy meetings in China. They set the direction for the economy in 2019.


The news on the 5th of March today was broadly in line with our expectations, with the growth target for 2019 revised down supported by modest additional policy stimulus, in the form of corporate value added tax cuts. The policy stimulus is skewed towards small companies; and the manufacturing, construction and transport industries – making it mildly positive news for commodity producers.

The 13th National People’s Congress (NPC), China’s Parliament, began its annual two-week meeting on 5th of March. The NPC is arguably the most important policy meeting in China because it is when key macroeconomic targets are announced together with the policies required to support them. Here we set out our initial view and a full response will be available later this month.

This year’s NPC has drawn attention given the US-China trade war, which has raised concerns about the pace of slowing growth in China, and the global economy more generally. The latter arising because China is the world’s second largest economy, which has close trade and confidence links to many other economies in the world.

The important questions facing our clients are:

The revision reflects the strong headwinds that China faces in 2019, e.g. the negative impact on the export sector arising from the 10% tariffs imposed by the US, last September, on $200bn worth of Chinese exports to the US.

This growth target is consistent with the Chinese government’s commitment to double the level of GDP between 2010 and 2020. To achieve this the government needs to achieve a growth rate of above 6% in 2019 and 2020.

Supply side reform and deleveraging remains intact
Our narrative of a managed slowdown in China is predicated on the view that the Chinese authorities want to ensure the economy grows at a pace that is sustainable over the long term, both in terms of the environment and in terms of financial risk. Indeed, over the past few years, the government has made efforts to stabilise the economy and financial system (deleveraging and controlling debt levels), in order to achieve a sustainable growth path.

The chart below tries to capture these competing objectives. To gain a better environment (e.g. blue skies) or a more robust financial system (e.g. deleveraging) is likely to require the authorities to accept slightly lower rates of growth.

The revision to the growth target announced at the NPC today provides reassurance that the authorities are still committed to those sustainable rates of growth.

There was no news in the NPC today that would lead us to change our view on the environmental and deleveraging policies.

The newly announced stimulus is skewed towards industry
Today the NPC announced stimulus measures (corporate tax cuts) that were targeted to help the sectors of the economy that have been most exposed to US tariffs - manufacturing and industry. The cuts were focussed on productive sectors of the economy and on small businesses. The VAT cuts are expected to be positive for the demand for raw materials (e.g. Aluminumium and Steel).

The policies this year differ from the global financial crisis, in that then a large share of the 2008/09 stimulus plan came in the form of additional government spending. This year the aim is to incentivise companies to make those investments themselves.

Market opening-up to foreign entities, but details to follow
This year a draft foreign investment law will be submitted to the NPC members for review. We will not know if that law has been passed until the vote on March 15. But the law is deemed to be a simplification of three previous laws and aims to make foreign investment in China easier.

Allowing foreign entries is partly the outcome of US-China negotiation and partly (more importantly) the government’s intention to reform. We have already seen foreign entries in the auto sector – Tesla being the first wholly foreign owned car company in China. Foreign entries good for productivity in the long run with more intensive competition but may present challenges for domestic firms in the short run.