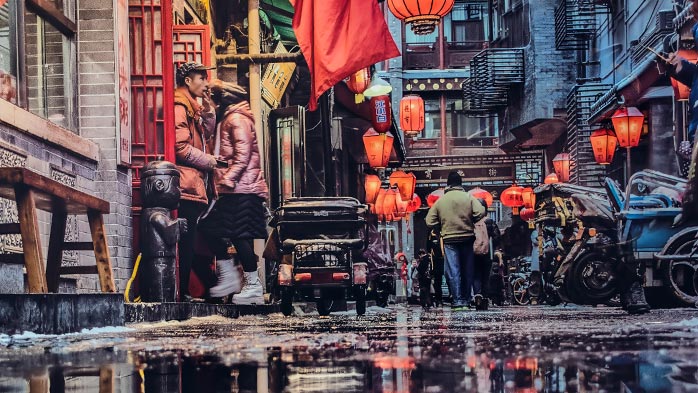 China published its GDP growth rate for the first quarter of 2020. GDP grew by -6.8% y/y in Q1 and -9.8% q/q, the first ever negative figure since the start of the Economic Reform in 1978. This number is not surprising given the lockdown brought the economy to a near standstill for almost two months


China’s latest data bears more significance than normal. With many around the world still in lockdown, they are looking to China to size the economic costs of Covid-19 containment. The key takeaway is that the costs of lockdown are indeed large. Today’s figures are broadly in line with our expectations.

Economic costs of the Covid-19 lockdown
China’s economy contracted by 6.8% in Q1 2020, marking it the first contraction since the quarterly data were published since 1992. The previous official contraction in China was recorded in 1976 on an annual basis.

In our March Global Economic Outlook, we set out medium term forecasts for China. Our expectations were that China’s economy will be hard by Covid-19. Today’s data confirmed our view, which was informed by the terrible monthly reading of the combined January and February data release, and the return to work that took place at a steady place through March. We had expected growth in Q1 to fall by 5.1% y/y. But uncertainty around this figure was very high. This is capture well by a recent Reuters Poll. The average of the 57 analysts’ expectation was -6.8% y/y, but their forecasts ranged from between -25% to + 4%, illustrating the huge degree of uncertainty around the figure. 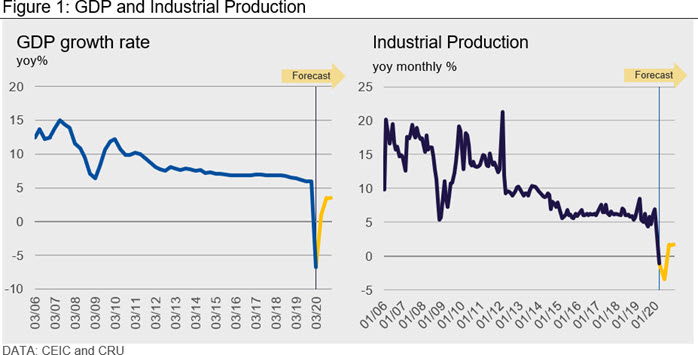 Industrial production, a gauge of manufacturing, mining and utilities fell by 8.4% in Q1. But withing that IP rose by 1.1% in March. relative to a 13.5% decline in January and February. The March IP figure was much better than expectations of a 6.2% decline from Bloomberg.

Within the industrial sector, manufacturing output contracted by 10.2% y/y in Q1 suggesting that even as factories reopen good demand has not yet fully returned. Withing the quarter, March showed a rebound of 1.8% relative to last year, while it fell by -15.7% y/y in January and February.

And within the manufacturing sector, the auto industry continues to perform poorly. But the pace of deterioration appears to be easing. Following an 80% y/y plummet in auto production in January and February, it fell by 54% y/y/ in March. It is worth noting that while the m/m changes can be volatile, there was a sharp rise in auto production in March (of 375%) relative to the previous two months.

With health worries, rising unemployment and social distancing remaining in place, the service sector, is not recovering as fast as the industrial sector.

A large negative demand shock
Retail sales, a key measure of consumption in the world’s second largest economy, plunged by 15.8% y/y in March, following a record slump of 20.5% in the January and February. This weakness in retail sales is clear evidence of the large fall in consumer spending (i.e. a negative demand shock) that is a direct result of the Covid-19 lockdown in China.

Within retail sales the catering sector, which includes restaurants and eating out, did not show any improvement, it fell by 46.8% y/y in March, worse that the -43.1% last month. No surprise, given that social distancing remains in place.

Of the 41 sectors of the Chinese economy (e.g. machinery, textiles, mining, hotels, tourism and restaurants), 90% improved in March, with 40% achieving a positive year-on-year growth.

Today’s data is broadly in line with our expectations.
China’s data is watched closely by the commodity industry, given China consumes almost half of the world’s commodities. But today’s data release gained greater attention because it was the first read to the world on the economic costs of a lockdown. The data was broadly in line with our expectations, with key takeaways below.

CRU expect growth to recover from Q2 onwards
At this time of year, we would normally be writing about the newly announced growth target for China for 2020. In recent years that target has been around 6-7% (e.g. in 2019 the GDP growth target was “around 6%”). Covid-19 has delayed announcement of such a target.

Our expectation is for growth in 2020 to be 2% - unsurprisingly much lower than previous years. This embodies expectations of additional, but modest and targeted, policy stimulus. With the economy showing a strong bounce-back in H2 2020 and H1 2021. CRU believe the economy will be back to its 2019 level of output by the end of 2020. However, it will not reach the level that we had expected, prior to the Covid-19 outbreak. In that sense, we expect a permanent loss in GDP level of around 5%.