Today marks the first day of China’s 2020 National People’s Congress. The overall message from this meeting was to achieve macroeconomic stability following Covid-19.


Premier Li Keqiang announced a stimulus package worth 6% of GDP or RMB6 tn ($840 bn). No GDP growth target was announced for 2020. Markets were disappointed. In contrast, the package is bang in line with our expectations. We see it as net positive news for the economy and commodities markets in 2020.

A target for unemployment but not for GDP growth

As expected, China’s government decided not to set a target for GDP growth in 2020. They justified this with respect to the high uncertainty in the aftermath of the Covid-19 crisis. They confirmed their focus on maintaining employment, people's livelihood, and intentions to eliminate poverty among all rural residents.

Fiscal stimulus of 6% of GDP 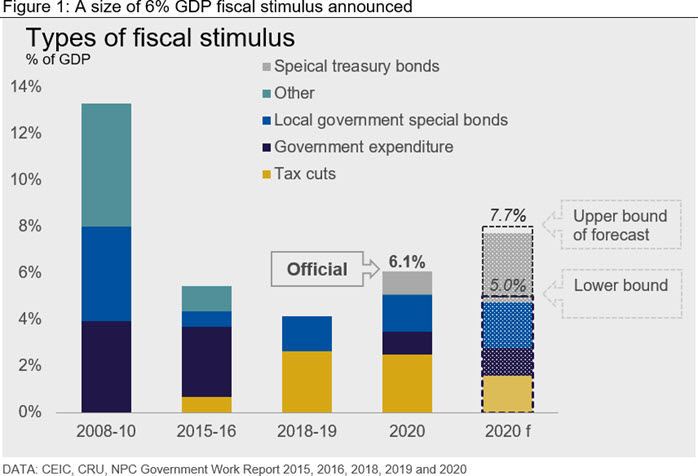 The tax and expense cuts announcement is on top of the RMB1.6 tn tax and expensed cuts that has already been announced in February and March 2020. Taken together China’s stimulus package for 2020 is a total of 6% of GDP. That is RMB6 tn (or $840 bn). Details of our calculations can be seen in Table 1 below.

CRU sees this is a good stimulus package. It puts GDP growth rate in 2020 firmly in the 2-3% bracket. The focus on infrastructure spending this year is good news for commodities markets.