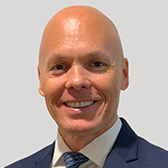 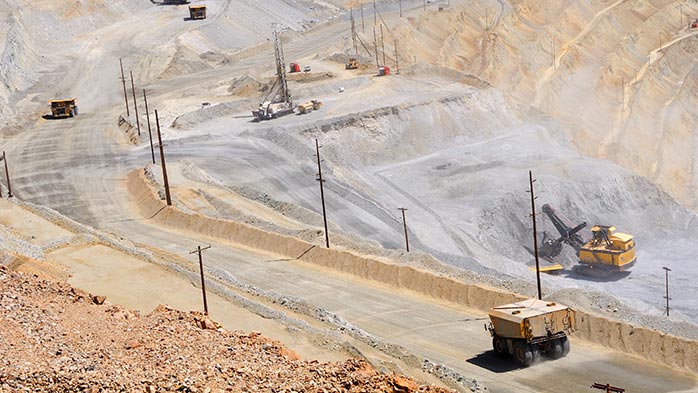 The copper price has seen a more volatile ride in recent months, following a remarkably steady ascent since its Covid-19 induced low of March last year.

While several factors have contributed to this volatility, much of it has been driven by the market’s pricing of risks associated with whether inflation in the US and other key economies is on an excessive path.

Global financial liquidity has helped fuel copper’s cyclical recovery, against a backdrop of continued supply challenges, a positive secular demand outlook driven by “green” applications and supported by large investments in public infrastructure. However, since copper prices reached a record high in May, inflation concerns have presented headwinds as markets price in an eventual unwinding of monetary stimulus. 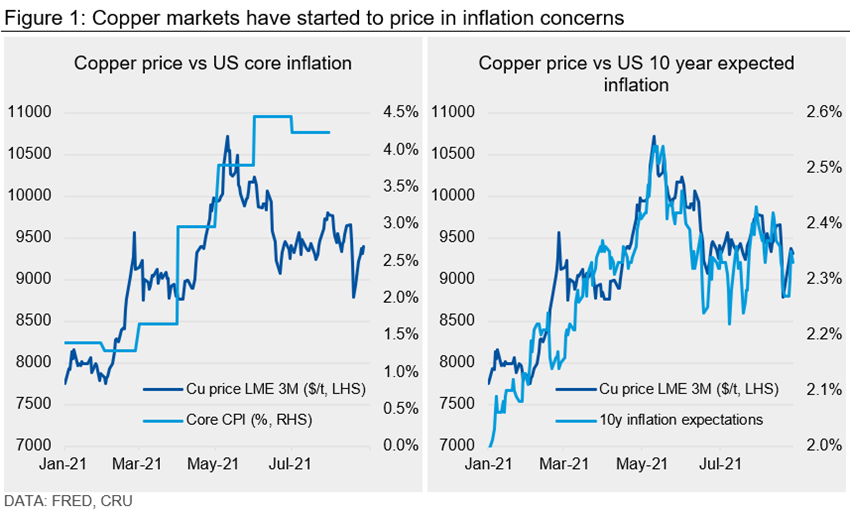 Historically, real asset prices have shown a close positive correlation with inflation expectations. This is associated with recovering global demand at a time of supply constraints and has contributed to copper’s price increases this year, at it has continued to benefit from the reflation trade. However, in recent months this has reached a point where it is now outweighed by the market’s concern that rising inflation will lead to a sooner than previously anticipated withdrawal of US Federal Reserve monetary stimulus. In this context, copper’s relationship with inflation has been flipped on its head with the market entering a phase where “good” economic news is seen as “bad” news for interest rates and therefore the price of copper and other commodities, and vice-versa.

More recently it appears the latest Covid-19 wave has led to a lowering of global growth expectations and a slight easing of inflation concerns. Inflation expectations are likely to remain an important copper price driver in the near-term with market concerns elevated. Beyond near-term inflation readings, concerns remain over just how inflationary the $1.2 trillion US infrastructure spending plan might be, and the timing of the Fed’s eventual tightening of monetary policy.

Copper’s relationship with inflation can be analysed in the context of both expected (future) inflation, reflected in bond markets daily, as well as currently observed inflation through the latest monthly CPI releases. It can also be assessed in terms of either headline or core CPI.

Headline CPI is a more volatile series as it includes food and energy prices, which are excluded in the closely followed core CPI series. Core CPI is generally considered a measure of underlying inflation. Energy price inflation has precipitated previous global economic downturns, as recently as the 1970s. However, the world economy is now more globalised, the service economy is much larger, and energy is a smaller cost, in relative terms, to world economic activity.

Copper’s price has historically performed well during periods of low interest rates and moderately rising inflation. Inflation expectations typically rise when global economic growth is improving, at which time demand for copper is also increasing. It also occurs when supply constraints in the economy exist, which typically occurs at the same time as constraints in the supply of copper and other commodities. This supply response for copper lags the recovery in demand due to the time taken to approve, finance and construct new projects in response to improving prices. 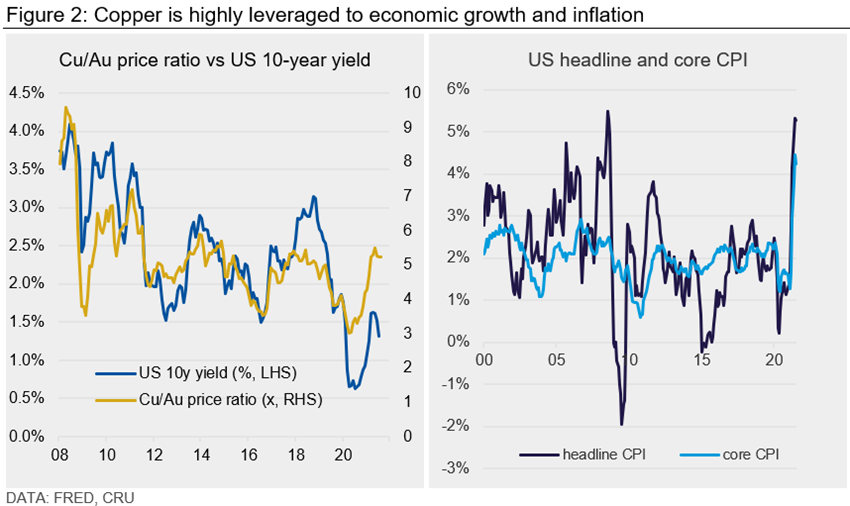 Another reason commonly cited, from an investment perspective, is copper and other commodities, as real assets, provide investors with a hedge against inflation. Copper has been seen as one of the strongest inflation hedges, showing an even greater price sensitivity than gold per 1% change in CPI. This is shown above and reflects copper’s industrial uses, including in technology, which correlates with economic activity. Commodities are used as a hedge against inflation and a weaker US dollar – note that both typically occur concurrently as inflation in an economy reduces the value of its currency. 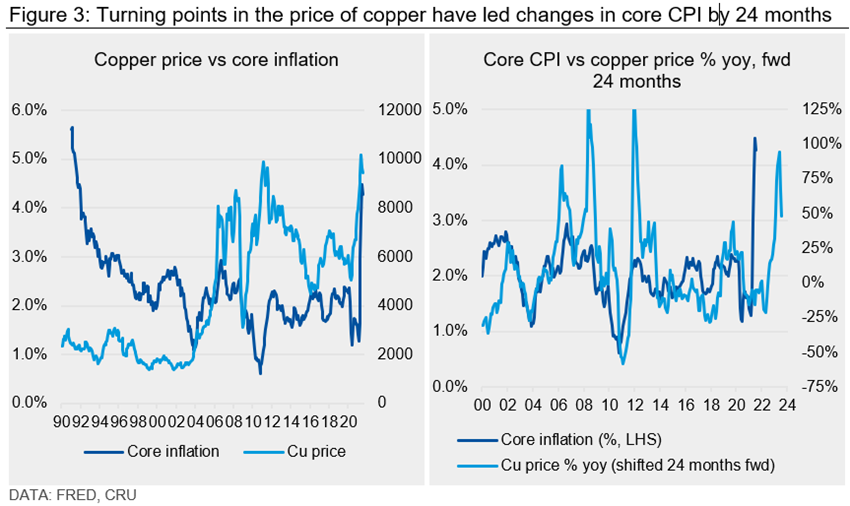 Year on year copper price changes have historically led US core CPI by around 24 months, as shown in the chart above. This relatively long lead time primarily reflects two key factors, which are additive - firstly, the time taken for higher copper input costs to feed through to finished goods prices and be reflected in core CPI; and secondly, copper is an anticipatory asset with current prices influenced by forward expectations for fundamentals, compared with the latest month’s core CPI which reflects very recent price inflation. However, we note that these series are not perfectly correlated and volatility and outliers in both series exist. We also note in more recent years it appears the lag between turning points in the copper price and core inflation has contracted slightly.

Where copper and other commodities can underperform is in situations where rapidly rising inflation, or inflation expectations, create concerns over the outlook for economic growth and (tighter) monetary policy.

In recent months copper prices have been caught between market concerns over rising inflation, while at the same time the Fed and other central banks have largely remained committed to accommodative policies, viewing the recent pick-up in inflation as transitory and reflecting the base effects of a weaker year ago period.

In May this year, the recovery in US and global economic growth was reflected in US 10-year treasury bond yields increasing to over 1.7%. Markets became concerned that rising inflation pressures would lead to higher interest rates sooner than previously anticipated, to prevent an “overheating” of the US economy. As a result, the price of copper fell by 15% between mid-May and mid-June, while other commodities also fell from their recent highs. 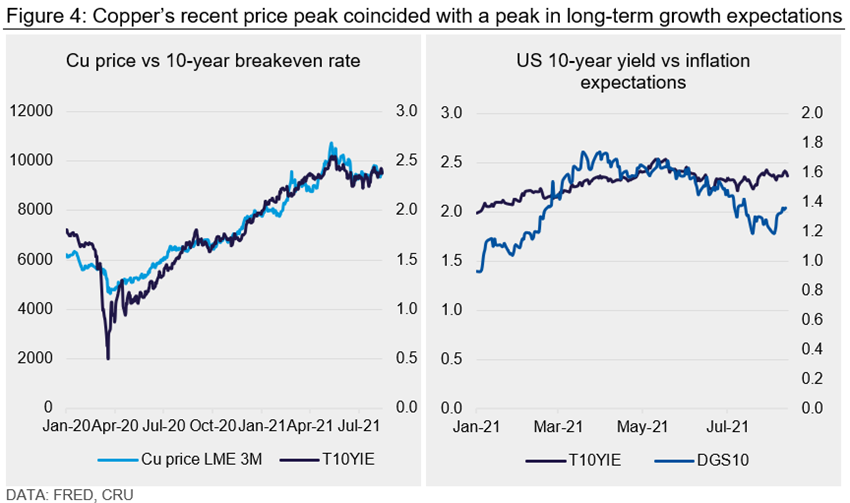 The latest wave of Covid-19 cases in recent months has seen a lowering of global growth expectations, reflected in 10-year yields falling back to around 1.3%. This was a key factor contributing to copper’s price recovery over the second half of July from around $9,200 mid-month, to end the month at just below $10,000. The release of the Fed’s July meeting minutes in mid-August added to other negative factors at the time, accelerating copper’s fall back to $9,000 /t.

A popular measure of inflation expectations is the “breakeven” rate, calculated as the difference between Treasury yields and the yields on Treasury Inflation-Protected Securities (TIPS), which are inflation-indexed bonds of the same duration. It is commonly observed on 5- and 10-year spreads. In recent years the price of copper has correlated closely with these break-even rates. 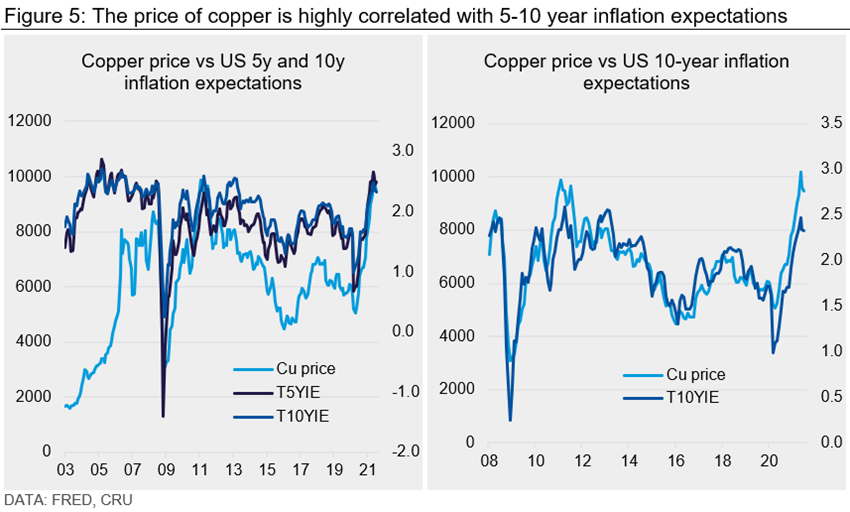 Breakeven rates had been rising earlier this year, reaching an 8 year high in May. However, they have since rolled over. The US 5-year breakeven rate is now at 2.5% while the 10-year sits at 2.3%, indicating that markets see inflation falling from current levels over a longer time frame.

Recent US inflation has been particularly strong when compared with other key economies, including China and the Euro area. Higher commodity prices are flowing through to cost pressures on businesses, reflected in the recent sharp increase in producer price indices, particularly in the US. 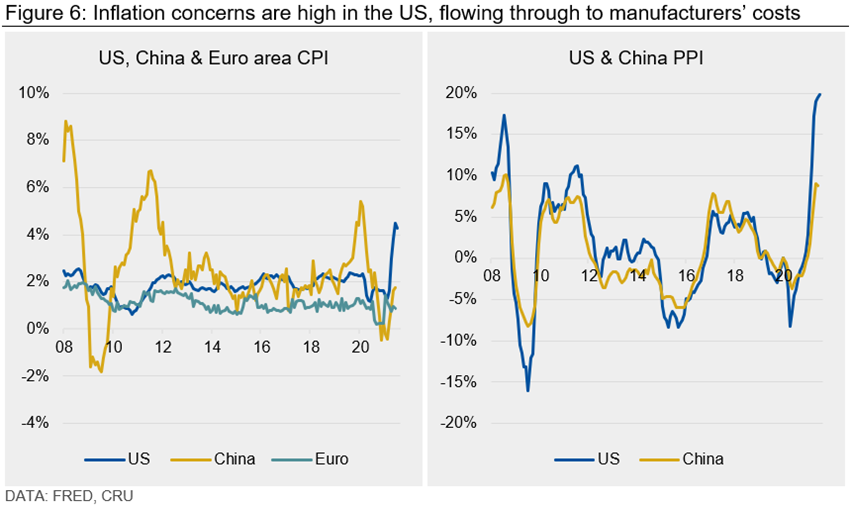 While moves in copper prices reflect multiple factors, the market for copper and other risk assets this year has shown heightened sensitivity to expected inflation. This is because of concern that a higher than desired rate of inflation could lead to the Fed increasing interest rates sooner than previously guided, to prevent an overheating of the US economy. This effect is particularly pronounced now for two main reasons.

Firstly, the unprecedented level of Fed stimulus. The Fed’s asset purchase program currently involves the Fed purchasing $120 billion of bonds each month. This has kept interest rates near record lows, supporting the demand for riskier assets. The market has become increasingly concerned the Fed will provide less support to markets and the economy later this year. Also, during periods of low (or negative) real interest rates, the cost of holding real assets is lower, providing another supporting factor which would be reduced by a tightening of monetary policy.

Secondly, current visible global copper inventories remain low, particularly in consumption terms, leaving prices more sensitive to changes in the global economic, and therefore copper, outlook. This includes changes to expected inflation, as the market prices in changes in expectations on monetary policy response and the effect on the outlook for economic growth. 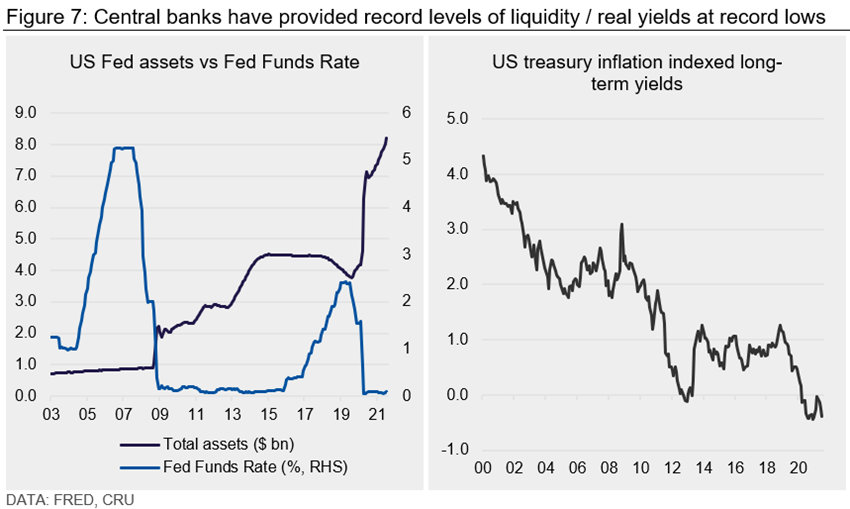 The Fed had been guiding the market towards no increase in interest rates before the end of 2023. The Fed’s view has been the increase in inflation reflects base effects and is likely to subside as short-term shortages ease. However, in June the Fed chairman acknowledged inflation could remain high for longer than previously anticipated. The subsequent release of the Fed’s July meeting minutes in mid-August indicated a broader intention amongst officials to commence tapering the Fed’s asset purchase program before the end of this year. The sudden fall in copper prices (-$500 /t in 24 hours) was a consequence of markets further pricing in this approaching taper.

There is now generally a view that real yields, currently negative due to the combination of low nominal rates and relatively high inflation, are too low and should move higher over the remainder of 2021.

Copper’s recent brief corrections have largely been driven by expectations that monetary policy could be tightened sooner rather than later, in response to rising inflation. However, the latest inflation readings suggest concerns have been tempered by the market factoring in the impact of the latest Covid-19 wave on global economic growth, as well as the gradual fade of the base effect of last year’s recession.

If inflation concerns do re-escalate, they may be less disruptive to copper prices if, as anticipated, the Fed’s tightening of monetary policy is undertaken in an orderly response to improvements in the underlying economy. By now the market has had time to adjust to this eventual tightening, including pricing in the change in sentiment in the Fed’s July meeting minutes. Beyond this, copper’s increasingly important role in technology should see its relatively strong price correlation with global economic activity and inflation expectations continue.