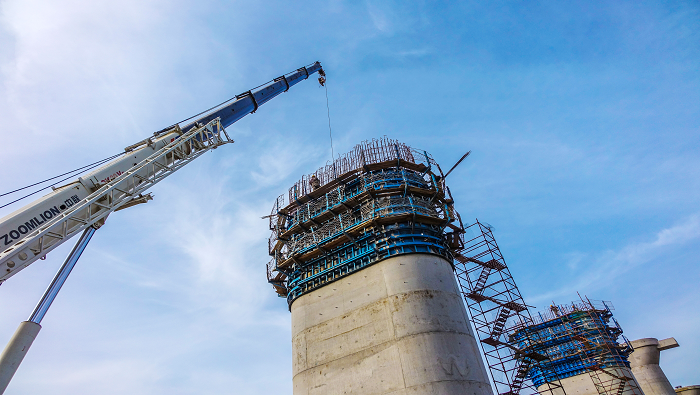 In China’s January–February economic data, fixed-asset investment (FAI) was the strongest indicator. We were expecting this as front-loaded fiscal spending by local governments prompted an increase in infrastructure investment. The ‘dynamic clearing’ Covid-19 strategy, aiming to minimise social and economic impacts, seemed to work well as industrial production and retail sales picked up. However, the strategy is being challenged again amid multiple local Covid-19 outbreaks. The property sector remained the biggest drag on the economy, which will require further easing measures to stabilise.

Front-loaded fiscal spending helps kickstart China’s economic growth as the contribution from exports wanes and the property sector’s woes drag on (Figure 1). China saw a bounce-back in fixed-asset investment, which jumped 12.2% y/y in the first two months of 2022. Industrial production rose 7.5% y/y during the first two months of 2022, up from December’s 4.3%. Retail sales rose 6.7% y/y, also an improvement on December’s sales.

FAI in infrastructure surges as the fiscal taps open

Previously, we were concerned that funds raised through special-purpose bonds (SPB) may not be able to make up for the drastic fall in land transfers, a major source of funding for local governments. The Chinese authorities are striving to meet the dual targets of stimulating infrastructure spending and reducing local government debt. To help achieve these conflicting goals, central government is increasing support. State-owned enterprises including People’s Bank of China (PBoC) recently disclosed that they will transfer RMB1.65 tn in profits to Ministry of Finance to help finance fiscal spending on transfer payment to local government and retained tax credits (Figure 3).

The move underscores the PBoC’s willingness to step up and accommodate a more expansionary fiscal policy in 2022, though the impacts of the operation on the economy might be tempered as the profits will be distributed monthly rather than a lump-sum injection.

Industrial production (IP) posted growth of 7.5% in Jan–Feb 2022. Production in the manufacturing sector improved from 3.8% y/y growth in December 2021 to 7.3% y/y growth in Jan–Feb 2022. This suggested less pressure on manufacturers to comply with production restrictions, and that power shortages are no longer an issue in 2022 as the policymakers committed to reduce disruptions to economic activities by enabling more flexibility in the dual control policy. Accordingly, power production has increase by 4.0% in Jan–Feb 2022. Automotive production improved from 1.3% growth in January to 6.0% growth in February. The rebound is attributable to an alleviation of supply-side constraints, particularly an improvement in chip supply as well as strong policy support for New Energy Vehicles on the demand side. However, construction-related production such cement and steel product remained subdued as the sluggish property market continue to drag on the demand for construction materials (Figure 4).

Real estate is yet to fully bottom out

The decline in FAI in real estate does appear to be stabilising, rising to 3.7% y/y growth Jan–Feb 2022 from a 12.9% contraction in December 2021. However, the growth in real estate investment was not reflected in construction activities. Although floor space under construction increased 1.8% y/y, floor space started fell by 12.1%, sales of properties fell by 9.6% and completions shrank by 1.9% y/y (Figure 5). As expected, the property sector has not fully reached the bottom and will continue to drag on the overall economy unless Chinese authorities introduce further easing measures.

Even though the property market shows early signs of stabilising, it will still take a few more months to fully rebuild the confidence among developers and homebuyers. Average new housing prices across 70 major cities were flat m/m in February, compared with a 0.1% gain in January. New housing prices rose 2.0% from a year earlier, the slowest pace since December 2015, also easing from the 2.3% growth in January. 46 out of the 70 major cities saw new housing prices slide whereas the number of cities reporting price gains decreased to 27 from 28 in January. Falling prices continued to dissuade homebuyers concerned about the value of properties, making it harder for developers to sell houses and generate much needed cash. Overall, the existing marginal relaxations will take several months at least to feed through to the stabilisation of construction activities (Figure 6).

These credit numbers indicate insufficient demand in the market, despite policy support since late 2021. Though softer February data usually reflect seasonal trends, the weak credit growth indeed suggested that households are hesitant to purchase homes, and corporates are reluctant to invest. While most of the current easing policies focused on increasing the credit supply, we expect more measures addressing demand weakness in the private sector to be introduced in the following months.

Downside risks at home and abroad

Despite surprisingly robust retail sales during the Chinese New Year holidays and Winter Olympics, recent surging Covid-19 cases in dozens of cities might again hit offline shopping and dining services. Though the dynamic clearing Covid-19 strategy seemed to work well during the Delta wave, this new surge is likely to interrupt the recovery of the struggling residential property market, as potential buyers are prohibited from visiting houses in affected regions. Meanwhile, rising commodity prices, along with an uncertain global outlook due to the war in Ukraine, will suppress near-term corporate investment.

While front-loaded fiscal spending kickstarted the robust growth in infrastructure investment, the potential shocks deriving from China's worsening Covid-19 outbreaks, the ongoing property downturn and economic fallout from the Russia-Ukraine war, will enhance uncertainty and continue to constrain economic activities. Hence, we continue to expect the PBoC to cut the reserve requirement ratio for banks and to lower the medium-term lending facility rates in its next operations, which will in turn result in lower benchmark loan prime rates.

If you are keen to hear more about our views on China and global economy, please refer to Global Economic Outlook and/or get in touch with our CRU economists: