Among the latest sanctions against Russia, the EU is planning to introduce a full import ban of Russian coal from August 2022. In this Insight, we look at the EU’s reliance on Russia for thermal and metallurgical coal and the ramifications of this ban on the mentioned markets.

EU is highly reliant on Russian thermal coal with 70%, or 45 Mt, of the block’s 2021 imports coming from Russia. The remaining key suppliers are Colombia, USA and South Africa. 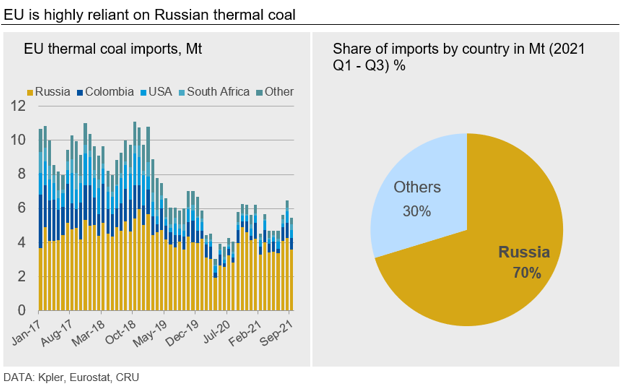 What are the alternatives to Russian thermal coal?

In Europe, Russian thermal coal is expected to be primarily replaced by larger exports from the USA and Colombia.

In 2021, US thermal coal production did not recover as quickly as domestic demand because many coal companies were reluctant to increase capital expenditures and hire more labour for capacity expansions when coal demand from power stations has been in a structural decline. Nevertheless, we forecast domestic US thermal coal demand to fall this year by 55 Mt y/y, while production is expected to grow by 35 Mt y/y. With the increased demand from Europe and very high international prices, we forecast US thermal coal exports to rise by 9 Mt this year to 45 Mt – this will be the highest level since 2018.

Colombian exports are expected to rise by 14 Mt y/y to 67 Mt, which will be the highest level since 2019 when the country exported 70 Mt. The largest increases are expected to happen from the country’s largest producers: Glencore’s Cerrejon mine and Drummond’s El Descano and Pribbenow mines. Furthermore, El Hatillo and La Francia mines will be restarting this year under new ownership after they were idled through 2021, bringing around 2 Mt of exports.

In South Africa, coal exports have still been hampered by railway bottlenecks, as was the case through 2021. This situation is likely to continue for the foreseeable future and exports from the country are not expected to increase in 2022. However, some volumes are likely to be redirected to Europe from the other markets, for example from China, where seaborne demand is expected to decline strongly this year due to imports being replaced with domestic production.

In Australia, thermal coal producers have been working at full capacity, and given demand from Northeast Asia (Australia’s key export market) is expected to grow by 15 Mt this year, there will be very little extra supply available for Europe.

In Indonesia, the world’s largest thermal coal exporter, exports have recovered sharply following the export ban in January 2022. However, it must be noted that Indonesian coal generally has substantially lower energy content than Russian coal and there are technical difficulties in using different type of coal at power stations, so it is unlikely that substantially more Indonesian coal would be imported into Europe.

Finally, there could be some incremental increases in domestic thermal coal production in Germany, Poland and Czech Republic through government support.

Overall, we expect around 23 Mt y/y fall in Russian thermal coal exports to the EU this year, which would be 51% lower compared to 2021. Around 10 Mt of Russian coal has already been exported to the EU in Q1 and it is likely that imports will continue up to the start date of the ban. 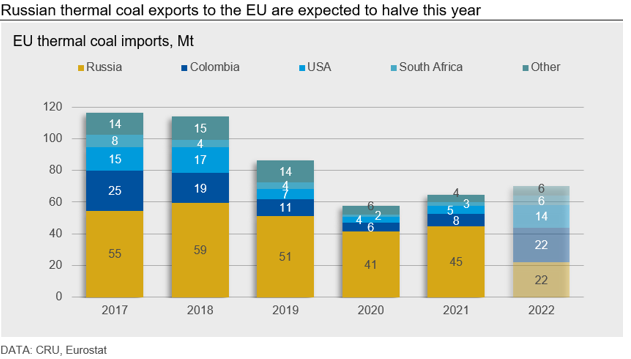 From 2023, EU’s thermal coal imports are expected to return to a downward trend as coal-fired power generation is replaced with rising renewable generation, as well as stronger nuclear generation after a weak output in 2022.

At the same time, thermal coal trade flows will continue to adjust, and we expect the remaining imports from Russia in the EU to be replaced by coal from other key producers, while more Russian coal is likely to go to Asia, Turkey and the rest of the world.

Russia accounted for only 8% of the EU’s coking coal imports in 2021 and 2020, or up to 3 Mt/y. Europe should be able to replace Russian coking coal imports with relative ease in comparison to thermal coal.  Australia has been the largest seaborne supplier of coking coal into the EU, followed by the United States and then Russia. Going forward, we expect greater supply from the US into Europe, incentivised by high prices and switching of trade routes to replace lost volumes from Russia. 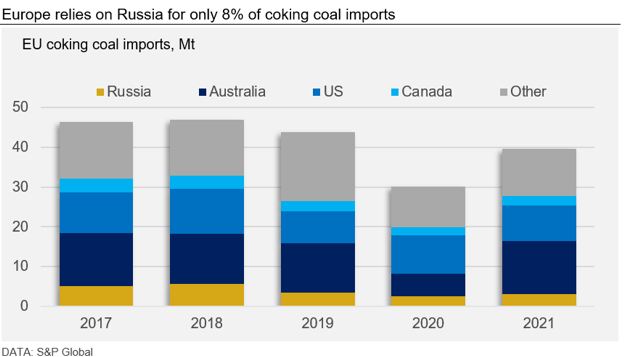 Russian metallurgical coal supply is concentrated on the semi-hard coking coal and PCI segments of the metallurgical coal market. The cessation of Russian supply will present operational challenges for steel mills in reoptimising their coal feedstock into the blast furnace. Russia is also the lowest cost exporter of metallurgical coal in the global traded market. In addition to the current spike in prices, the permanent removal of some Russian supply will lead to other higher cost projects needing to be incentivised, leading to higher prices in both the medium-term and long-term.

As per our latest Metallurgical Coal Market Outlook, we expect a supply response from the US to help rebalance the market in 2022 and 2023, with a higher volume of US and Australian coking coal to flow into Europe. In addition to this, some demand is expected to move downstream with additional imports of Chinese metallurgical coke also expected. Chinese imports of metallurgical coal are expected fall due to high seaborne prices and higher domestic production. In 2023 we expect the supply response to build, with greater supply from Mozambique to flow into Europe (and India), whilst incremental Mongolian exports will return to the Chinese market, leading to greater US exports to flow towards Europe. 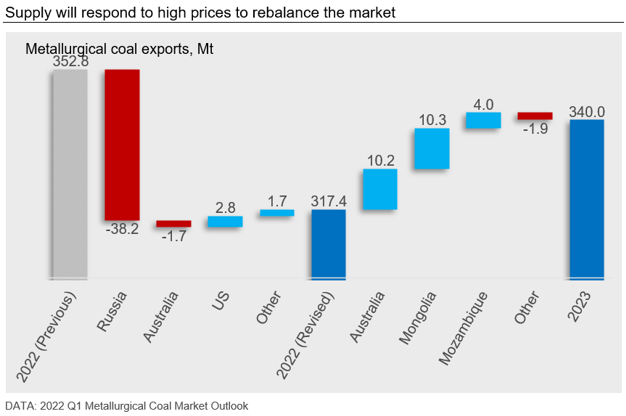 The EU will be most impacted by reduced PCI availability

While Russia accounts for a smaller share of EU coking coal imports, Russian PCI accounts for nearly 30% of Europe’s PCI imports. The ban of Russian coal imports will leave a PCI supply gap of up to 5 Mt/y. This will mostly be sourced from Australia, given it is dominant exporter of PCI in the seaborne market. The PCI market balance remains tight with little spare capacity and Asian buyers also looking to replace Russian volume. PCI prices are expected to remain high in the coming months. We expect PCI discounts to the HCC price to contract in 2022 during the period of market rebalancing and limited supply of PCI into the market. Discounts are expected to be 19% in 2022 compared with 25-30% range over the past five years. Lack of adequate supply and/or prohibitively high PCI prices will force steel mills to re-optimise operations.

Market shift has already been underway before the ban

In our view, the ban does not bring a significant change to already existing market conditions as the shift of European buyers from Russian coal has already been underway since the start of the invasion and introduction of the first round of sanctions. Many companies, including Uniper and EnBW, have already said they are aiming to stop working with Russian coal companies and have been looking for alternatives. Moreover, Poland had said it will ban Russian coal imports from April or May, while Germany had previously announced it will replace it by the end of 2022.

With European, as well as many Northeast Asian buyers looking for alternatives to Russian coal, prices for both thermal and metallurgical coal are expected to remain at high levels in the short-term. However, as more production ramps up and trade flows reallocate, we expect coal prices to fall in the second half of 2022.