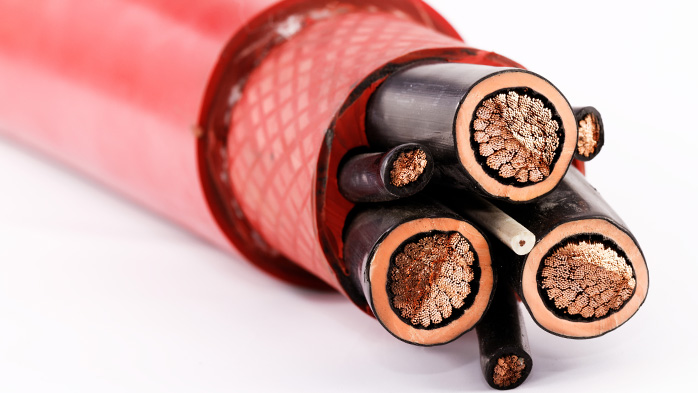 This year marks the 50th anniversary of the creation of the Association of Southeast Asian Nations (ASEAN) and the 20th anniversary of the Asian financial crisis.  While the region has enjoyed almost uninterrupted economic growth over the last twenty years, metallic wire and cable consumption is still only 5% of the world total.  There are a number of identifiable trends that suggest that growth should continue in the future.


Linking copper semis and wire and cable production
We estimate that ASEAN refined copper demand reached 1.0Mt in 2016 with Thailand followed by Indonesia the largest consuming countries. 74% of primary metal units are consumed by the region’s 25 wirerod producers with the residual taken up by the brass mill sector.

Whereas in Western Europe integrated producer-fabricators such as Aurubis or stand-alone manufacturers such as La Farga dominate wirerod production, the ASEAN industry is generally associated with local downstream wire and cable operations. Many of these are fully or part-owned by Japanese wire and cable makers and feed into regional and global manufacturing and processing supply chains.

Drawing on information contained in the July 2017 edition of CRU’s Wire and Cable Market Outlook, gives an insight into the make-up of the ASEAN metallic wire and cable sector. As the chart indicates, measured by conductor weight production was 855,100t in 2016 and is forecast to grow by 3.7% in 2017. Of last year’s total, just over 720,000t was copper with 133,000t in the form of aluminium power cable. Indonesia and Malaysia were the two largest producing countries with low voltage energy cable, which accounted for 44% of the total, the most important product category.

Production is a large part of but not the whole story, at the country and regional level, because there is also an element of intra-and extra-regional trade in metallic wire and cable. Trade volumes are relatively large, due in part to competition and specialisation, but also the aforementioned manufacturing and processing supply chains, which tend to be cross-border, especially in the case of the automotive sector.

By conductor weight, regional gross exports were equal to 45% of production at 377,000t in 2016. Over 70% of this was low voltage energy cable and 19% winding wire. The Philippines was the largest exporting country accounting for 25% of the total, primarily in the form of automotive harnesses. More generally virtually all ASEAN metallic wire and cable exports remain within the region or are shipped to China, North-East Asia (Japan, South Korea and Taiwan) and North America. In recent years imports have been slightly lower than exports, resulting in the region running a modest surplus in metallic wire and cable. 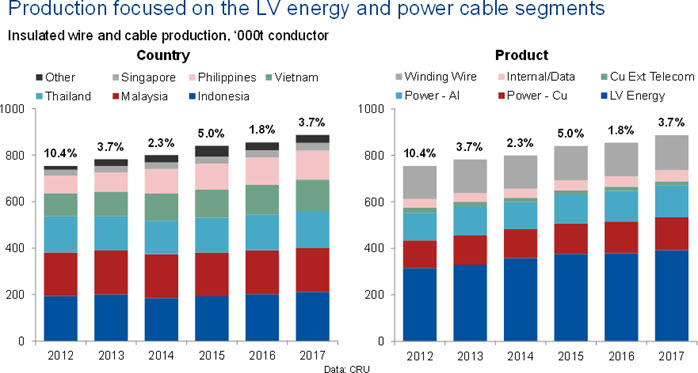 The other implication of this is that year to year, consumption, which reached just short of 830,000t in 2016, is less than production.

The ASEAN growth story should continue
The short to medium term outlook for ASEAN remains positive driven by high levels of public spending and continued growth in goods manufacturing and processing. GDP growth is expected to increase by 4.7% this year and remain at close to that rate over the next five years. We expect this to translate into similar growth rates for metallic wire and cable consumption.

More generally and looking to the longer term as well, there are a number of identifiable trends that should support growth, underpinned by a rising working age population and increasing urbanisation. The associated requirements for infrastructure mean that the region’s electricity generating capacity is expected to grow substantially, with other infrastructure plans centred on housing and transportation networks. Implementation of infrastructure projects has, however, proved difficult in the past, in part due to political corruption.

Similarly, fundamentals support a continued expansion of the region’s manufacturing base. Local content rules and the prospective elimination of intra-ASEAN import duties will encourage companies to feed rising demand from within the region. In addition, while the off-shoring of manufacturing from North East Asia is well advanced, rising labour costs in China are encouraging companies to relocate operations into ASEAN. This applies in particular to auto-harnesses. We estimate that Cambodia, for example, has gone from producing no auto-harnesses in 2011 to over 7,000t of product last year.