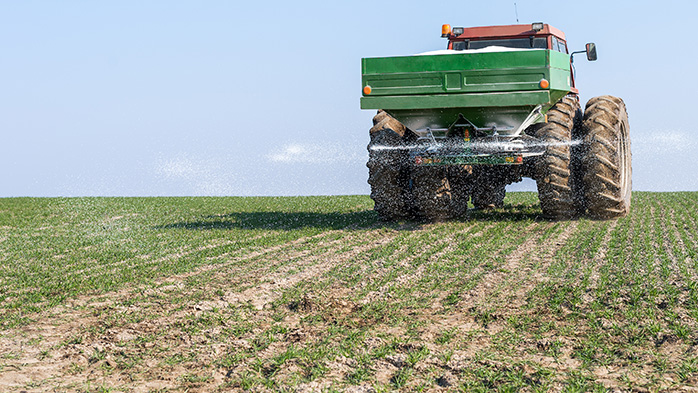 Global ammonium sulphate supply growth jumped to 4.5% per year for the period 2010-2016 from 1.6% per year for 2000-2010. The increase is explained by a surge in new capacity in the Chinese caprolactam sector. New supply has triggered new demand.


But has the growth only been tied to higher ammonium sulphate availability or are there structural changes that explain the increase in the supply growth rate? How and where has China found a market for its new ammonium sulphate supply?

Introduction
The global ammonium sulphate (AS) market has been through a process of rapid capacity expansion that has been driven by the addition of CPL-based AS capacity in China. China’s push to become self-sufficient in CPL has forced the wider world to restructure its capacity and sales routes for CPL and AS. The AS sector has production bases in North/Central America, Europe/CIS and Japan/South Korea/Taiwan. Since 2010, China has been increasing its market share partly due to capacity closures in Japan, Europe and USA. Growth in Chinese supply has been focussed in the supply of standard crystalline grade and Coke-oven gas (COG) based low grade AS whereas the rest of the world has had a greater focus on adding granular AS capacity. 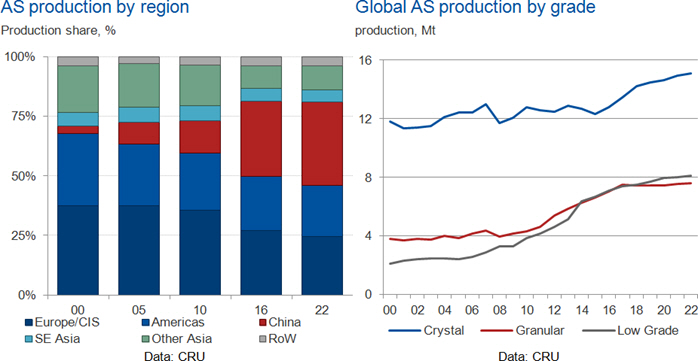 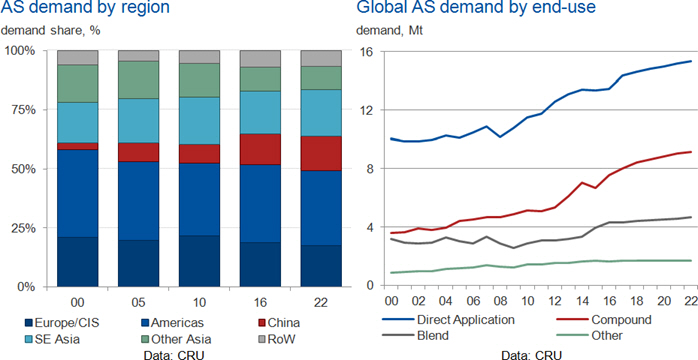 Chinese market expansion
China has been the focus of growth in new AS supply due to the drive to become self-sufficient in CPL. CPL-based AS capacity increased 400% since 2010 and Chinese capacity is expected to increase further by 2022. COG-based supply had been the major share of the market before 2010, but CPL-based AS is expected to overtake COG by 2022. At the same time as growing supply, there has also been growth in exports. However, China is also one of the largest markets for AS consumption and this demand has been increasing with compound NPKs the major end use.

Chinese supply growth drives up international demand
The increase in supply availability has pushed up global demand. The countries and regions which have increased demand closely mirror the destinations of increased Chinese exports. SE Asia has remained the major destination for Chinese sales, but there has also been the emergence of trade flows to South Asia, South America, North/Central America and Africa. Chinese sales to North/Central America peaked in 2015 at 0.7 Mt but have since fallen to 0.5 Mt. The implementation of anti-dumping import tariffs on Chinese AS by Mexico and USA have caused sales to these countries to stop. In contrast, other Central American countries continue to buy large volumes of AS from China. In South America, the success of growing sales has been linked to the ability of China to supply “granular” product. Much of this product is in fact compacted granules which take crystalline and low grade AS and uses mechanical pressure to form granules. Sales to Africa are still a minor share of the total but have increased from a very low base. Total African AS demand now totals 0.8 Mt in 2016 up from only 0.3 Mt in 2010 with Chinese imports accounting for 28% of the 2016 total. 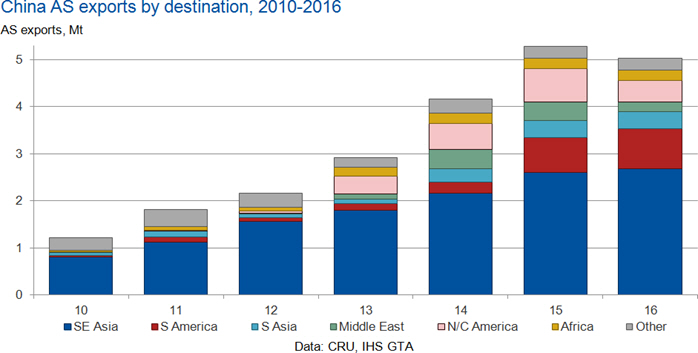 Other factors also affect the growth in trade volumes
The implementation of import tariffs in USA and Mexico in 2016 forced China to find new homes for a large share of its sales. So far this has been focussed on selling even more to Brazil, but also to SE Asia. This strategy has been a success so far but there are risks. New AS capacity is being added in SE Asia which could offset the need to import. Also in SE Asia, the rate of growth in palm oil areas is expected to slow over the coming five years which will make it more challenging to continue to growing AS sales.In Brazil, there is a new requirement for only granular AS to be included in blends, it is estimated that over 50% of AS consumption in Brazil is in blending. This requirement can be seen as supportive for both true granular AS, but also for compacted product.

In Brazil, there is a new requirement for only granular AS to be included in blends, it is estimated that over 50% of AS consumption in Brazil is in blending. This requirement can be seen as supportive for both true granular AS, but also for compacted product.

Conclusions
China has increased AS production 200% for the period 2010-2016, exports increasing 300%. Traditional suppliers of AS have been pushed out of the market and forced to re-evaluate how and where to compete for market share by the scale and speed of China’s AS production and export growth. There has been demand growth in recent years—driven by a growing appreciation for the value of sulphur nutrient and agronomic benefits of using AS on certain crop types—although, growth in demand has not been strong enough to keep pace with capacity additions. In the next five years, China is forecast to add a further 2.2 Mt of new AS supply. Will this supply easily find a home in local or export markets or will there be another round of closures or re-distribution of global AS exports?