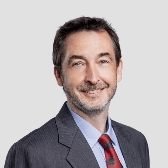 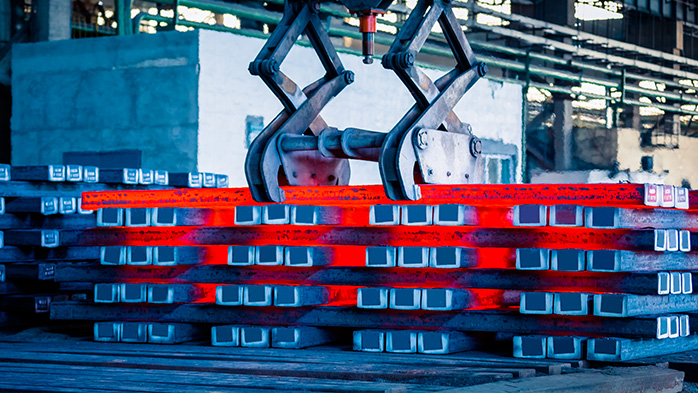 The structure of the Chinese steel sector has changed fundamentally over the last 18 months, as supply reform has been pushed through.  This will continue to have a significant impact on pricing and profitability of the domestic industry.


As the steady-state profitability of the domestic market lifts, the incentive to seek sales overseas will fall and we expect carbon steel exports from China to drop.  Importantly, the price of these exports will be closely linked to the higher domestic prices, therefore, they will be priced higher relative to costs compared with recent years.  We believe this situation will benefit steelmakers everywhere, as capacity utilisation of the industry lifts and profitability improves.

Improved Chinese industry health to spread?
We believe that closures in the Chinese steel sector have fundamentally changed the structure of the industry and, as discussed in our previous two Insights of this series, we expect this will lead to higher margins on steel sales and, more specifically, a stronger domestic market. But what does this mean for exports of steel, export prices and, more importantly, for steel makers elsewhere in the world?

The strength of the domestic market: a key determinant of exports
Analysis previously carried out by CRU has shown that there are three key determinants of exports from a country. These are:

Our analysis indicates that the primary determinant is ‘strength of the domestic market’. The other 2 factors become important when a significant shift occurs, such as in 2014 when steel demand and prices in the USA were very strong, which pulled in imports, but also lifted scrap prices. In turn, higher scrap prices conferred a cost advantage on Chinese steelmakers delivering into the South East Asia region. In response, during the year, Chinese exports ramped up by more than 50%, with increased exports to the USA, but primarily to South East Asia.

However, as in this case, these situations tend to be shorter in duration and, by 2015 H2, the poorly-performing Chinese market began to re-impose itself and since then it has been the major determinant of exports. The graph below shows the relationship between steel exports from China and ‘strength of the domestic market’, as measured by the profitability of Chinese steel makers (n.b. taken from CRU’s Steel Cost Review). 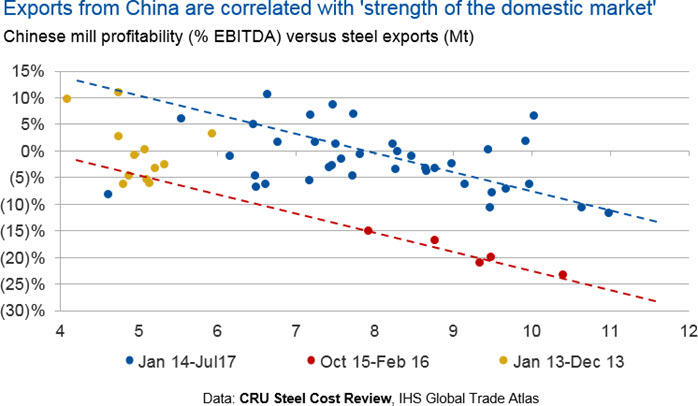 The above graph shows that, during the core period between January 2014 and July 2017 (n.b. July 2017 is the latest date for which export data is currently available), there is a close relationship between ‘strength of the domestic market’ and exports – that is, as the domestic market improves, exports fall. The rationale for this is that Chinese steelmakers would always prefer to direct steel to the domestic market, where margins will be higher, when there is sufficient demand. This behaviour is no different from that expected of steelmakers anywhere else in the world.

It is interesting to note that, in 2013, prior to the initial uplift in China’s steel exports, total steel exports were relatively low, given the strength of the domestic market (i.e. the yellow data points sit below the blue trend line). We interpret this in two ways. Firstly, we see it as a function of market demand at the time that was still growing at a rate of >10% y/y, a carry-over from the earlier stimulus measures, and the fact that steel was still being preferentially diverted to the domestic market to support that demand. Secondly, perhaps 2013 data indicates a volume floor to exports that provide steel mills with a degree of operational flexibility and de-risking (i.e. maintaining some contact with export channels allows material to be diverted into the export market at short notice).

Equally, during the October 2015 to February 2016 period, when the Chinese steel industry was going through its worst period in modern history, exports did not rise as much as might be expected, given the very poor conditions in the domestic market. This was likely due to a ceiling to Chinese export volumes associated with overall profitability of those sales, constraints to export infrastructure, a ceiling on export demand, political opposition in destination countries and other factors. Having said that, the overall conclusion implied by the above relationship remains unchanged. That is, as the domestic market improves, exports fall.

What does this mean for exports from China?
As set out in the previous Insights in this series, given the supply reforms seen in the Chinese steel sector and under our forecasts for finished steel demand and crude steel production, we expect the Chinese steel industry to be operating at above 85% capacity utilisation, at steady-state, over our medium-term forecast period. Analysis suggests that this should lift steady-state profitability to 10% EBITDA or above. 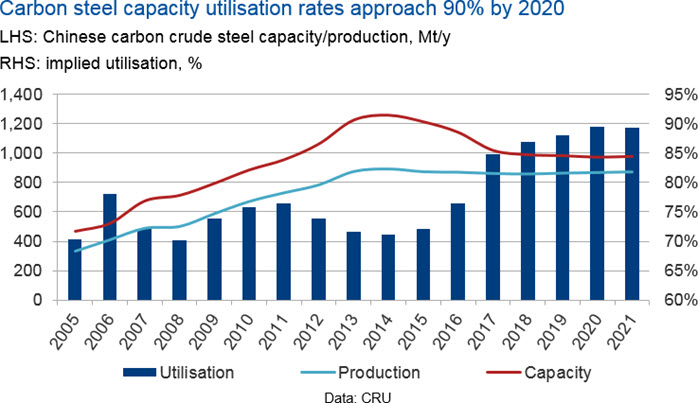 Given the strength in the domestic market that this implies, this will see a greater percentage of material diverted to the domestic market and exports will fall.  According to the relationship shown previously and taking into account a potential floor volume to exports, the greater profitability in the domestic market could see exports fall to ~5-6 Mt/month, or 60-70 Mt/y.  Taking into account imports of steel, which we believe are associated with specific grades and quality requirements and so will remain relatively stable over the next 5 years, the below graph gives our view of ‘net exports’ out to 2021. 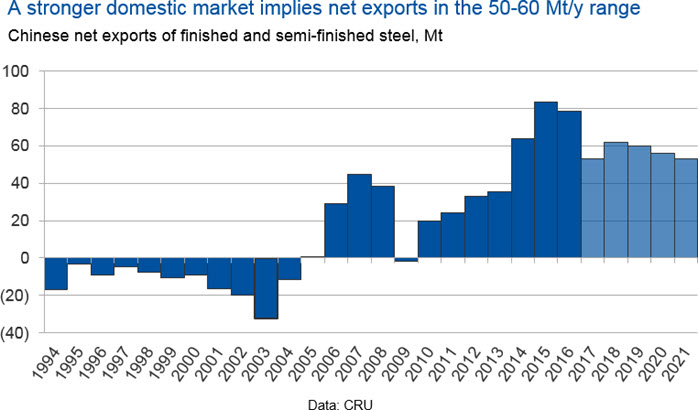 And we are already seeing the impact of this today!  The steel market in China has been performing well since September 2016 and exceptionally well since June 2017 and current profitability is high.  The level of profits today is not sustainable, but the impact has been a significant lowering of exports, to the floor level discussed above.  And steelmakers elsewhere are already seeing the benefits.  On our latest research trip to South East Asia, we found that producers there are taking full advantage of the lower availability of material from China to ramp up steel production (n.b. the increase in EAF production has also contributed to the recent price hikes for graphite electrodes, discussed elsewhere).  So, Chinese export volumes will be lower, but how will they be priced? 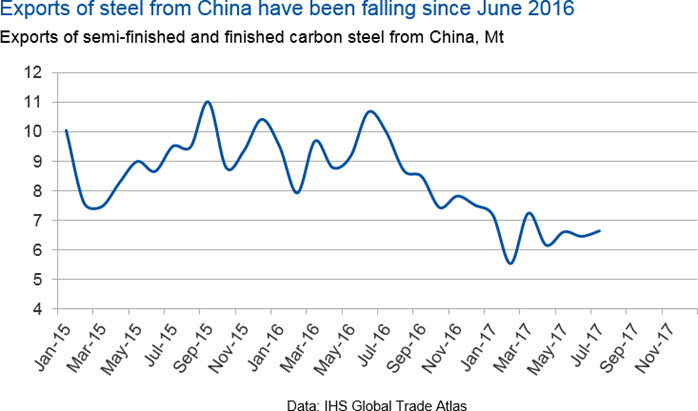 What price exports?
Under normal conditions there is a natural differential between domestic and export prices associated with either cost factors, such as logistics to the destination market, or other market-related factors, such as lead time, quality consistency, risk etc. At times of very strong demand in the domestic market, this differential can lift, and vice versa. However, under steady-state conditions, a typical differential will re-impose itself. For China, historical analysis suggests a steady-state differential of ~$35-40 /t for HR coil and ~$20 /t for rebar; currently, these differentials are running at ~$60 /t for both products. 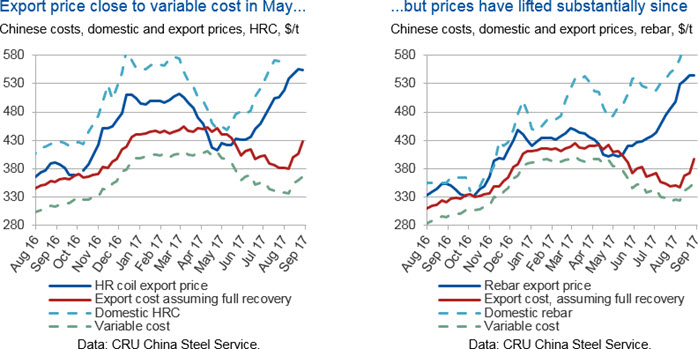 So, currently, the differential between domestic and export sales is high, but this is expected to return to a more normal, steady-state level once the steel sector in China familiarises itself with operating at higher levels of capacity utilisation and it exits the current period that has been characterised by rapid transition and change. Under these, more stable, conditions, domestic steel prices will pull back from today’s levels, but will continue to be set higher relative to costs and the industry will be profitable. However, importantly, export prices will be set relative to the domestic price and steel companies outside of China will benefit from both lower levels of exports and exports that will be priced favourably relative to costs.

Conclusion
The structure of the Chinese steel sector has changed fundamentally over the last 18 months and we believe that the industry will be operating at higher levels of capacity utilisation over the medium-term. This will have impacts on steel pricing and profitability in the domestic market and our analysis suggests that the incentive to export will fall. As such, we expect exports from China to fall to 60-70 Mt/y and these exports will be priced higher relative to costs, benefiting steelmakers everywhere.