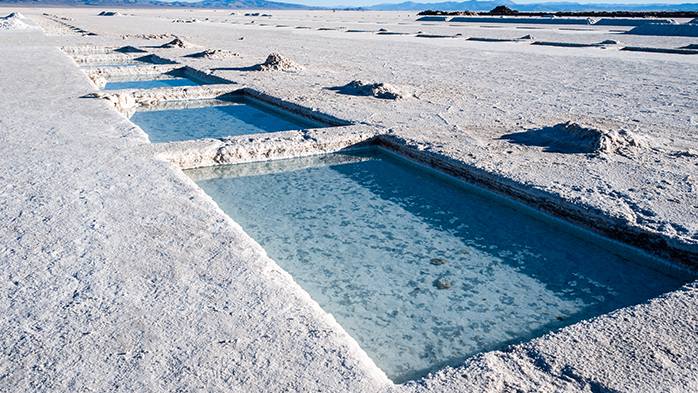 Recent developments in mined lithium supply, at both incumbent producers and new or expanding projects, have served to reinforce the concentration of production among a limited number of participants in the geopolitically diverse regions of China, Australia and South America.


Overall we forecast the market moving into surplus slightly more rapidly this year than we had anticipated in our work last year.  Positive developments, particularly in South America, are predicted to outweigh slower growth in production from hard rock mines in Australia and China. 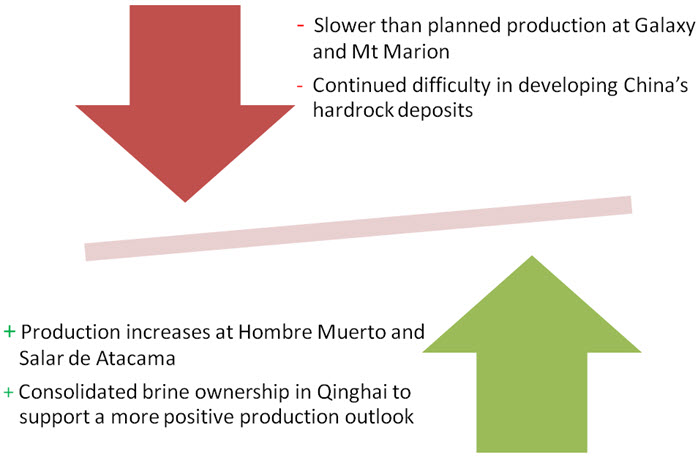 Production increases in Chile from Albemarle and SQM
Production from Albemarle’s Salar de Atacama operation accelerated in 2016, reaching an annual total of 33kt LCE (Lithium carbonate equivalent), an increase of 8kt LCE year-on-year. The production increase reflects Phase 1 of the La Negra expansion to ultimately bring capacity up to 45ktpa LCE. In January 2017, Albemarle received the final approval from the Chilean Economic Development Agency (Corfo), which allows them to produce up to 80ktpa LCE. Albemarle could achieve the additional production by building a third plant in the Phase 2 expansion of La Negra.

SQM also expanded output in 2016, reaching a total sales volume of 49kt LCE, compared to 40kt LCE in the year prior. The higher level is as a result of an optimised lithium yield, at the expense of potassium chloride production, in order to take advantage of high lithium prices. We expect production from SQM’s Salar de Atacama operation to reach 45kt LCE in 2017, and to maintain a lithium production volume >40kt LCE for the next couple of years.

Ownership rationalisation in China
Qinghai province in China is home to rich brine resources; more specifically, lithium is mainly found in the Qarhan (Chaerhan) Salt Lake and East Taijinar Salt Lake. However, disputes in extraction rights have to date hindered lithium production. The situation changed in 2016 as proactive efforts were made by government and project operators and developers to rationalise ownership and solve disputes. We expect three projects in China to come on stream in 2017, all of which are brine deposits in Qinghai province, these include: West Taijinar Salt Lake (Steyr Motors), West Taijinar Salt Lake and Da Qaidam.

Many brine projects and operations in China, in addition to West Taijinar, are frustrated by their high Mg/Li ratio which increases both technical difficulty and production costs.

Distribution of China’s brine resources in Tibet and Qinghai 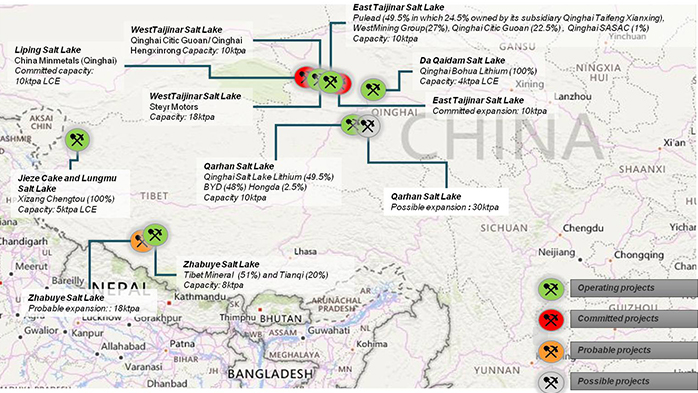 Slower than planned production in Australia
Mt. Cattlin and Mt. Marion in Australia were both earmarked to start production in 2016, but both projects experienced delays in commissioning and ramp up. Galaxy Resources originally planned for Mt. Cattlin’s first shipment by July 2016; however the first shipment was delayed until January 2017. It is believed part of the shipment contains spodumene produced from ore extracted back in 2013 – when the mine was last in operation.

Continued difficulty in developing China’s hard rock deposits
In 2016, production at Maerkang spodumene deposit – the only operating hard-rock mine in China - was lower than expected due to a water shortage which put production on hold for over four months; production was only resumed in May 2016.  Production at Maerkang has been, and is expected to be, continuously hampered by local opposition. There are plans to commission a Maerkang Phase II to expand production by 16ktpa LCE by 2017; however, CRU expects the expansion to be delayed until 2020 at the earliest.

The Gyabjeka deposit owned by Youngy is another spodumene deposit facing problems with entering production. The construction of Phase One (capacity: 44ktpa LCE) was completed in 2014. However, production has been suspended during the past two years due to a dispute over profit sharing with the local government. In 2016, further environmental issues prevented the project entering into production and the company is currently waiting for approval from the local government. We expect that production will start in 2018 if these issues are resolved.

In 2016, Chinese companies reported technology breakthroughs in extracting lithium from lepidolite deposits. As such, the beneficiaries of these technologies - Hezong and Jiangxi Tezhong Motor – have successfully commissioned their production lines in the Yichun lepidolite belt of 5ktpa and 2ktpa LCE respectively. However, we remain somewhat skeptical of the potential for mass production of lithium from lepidolite deposits because of their higher cost and more challenging waste treatment. The operating cost of lithium production from lepidolite is typically 10% higher than the equivalent cost of production from spodumene ores. Further, currently most production of lepidolite concentrates is supplied to glass and ceramics manufacturers. We believe it will take some time for producers to adjust their product to suit the needs of the growing battery sector. 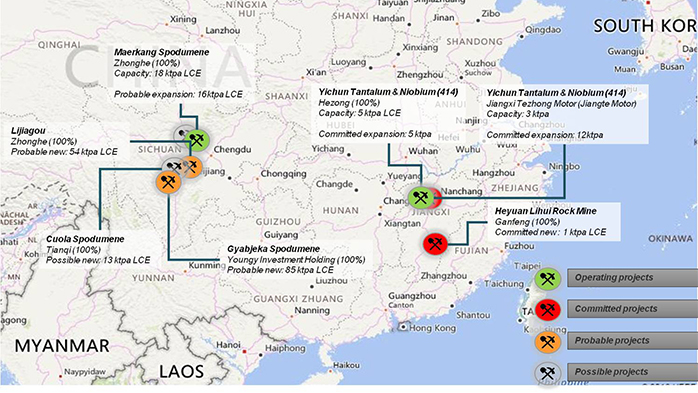