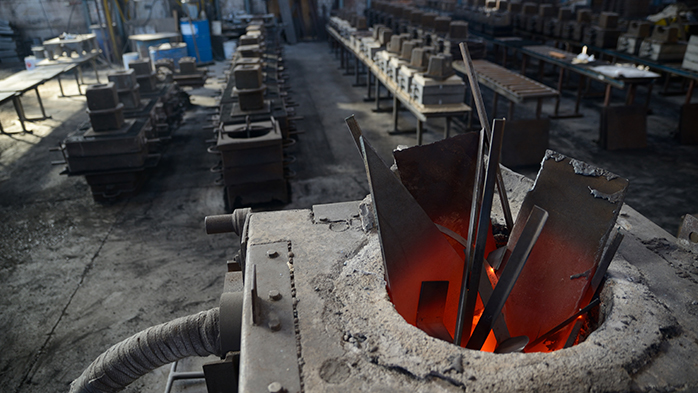 China is taking action to remove low quality steel output, which is mostly produced by induction furnaces (IFs), by the end of June this year.


CRU recently published a Special Feature in the Metallics Market Outlook that analyses why IFs have been targeted and shows why these closures present an upside to hot metal production, albeit limited.  CRU’s baseline analysis suggests a complete clean up of the IF sector would result in a surplus 21 Mt of scrap that would need an increase in BOF and EAF scrap rates to consume.  We see it as likely that this scrap will be consumed, but there is some limited upside for hot metal production.

Complete closure of induction furnace capacity is expected
The China Iron and Steel Association (CISA) announced at its meeting in January that the government aimed to completely eradicate low quality steel by the end of June 2017 and induction furnaces (IFs) were the primary target.  The targeted closures are considered as a political priority and have been given a specific deadline, indicating the government’s seriousness to support the operations of qualified mills.

IF steel: the reputed underworld of the Chinese steel industry
Many induction furnace mills are located in remote areas and the market is quite fragmented.  Our estimate of IF capacity is 70-80 Mt across the country, with a majority producing billet and rebar.  Since they are typically small operations that charge only scrap to produce steel without secondary steelmaking, steel produced by IFs are too brittle to be used in the construction.  This means that IF steel had been categorised as “outdated” in the government’s Guidance Catalogue for the Industrial Structure Adjustment (2011 edition).  While the criteria were published in 2012, the government had subsequently turned a blind eye to the existence of IFs, primarily because IF production was already low due to high scrap prices relative to bulk raw materials.  It was considered too costly for the government to dismantle fragmented IFs that were not producing significant volumes.  However, market conditions changed in 2016 and made its reasonable target more rapid closures, as this can protect operations of qualified mills, secure government tax revenues, improve the quality of buildings and reduce the safety risk for residents.

BOF and EAF capacity can consume the surplus scrap from IF closures
Although little data is truly available on IF production, our estimate in October 2016 was 25.5 Mt for 2017, which equates to about 29 Mt of scrap.  Because infrastructure is in place to collect, process and distribute this scrap, it is expected there will be a drive by the industry to ensure other processes utilise the material.  There are two reasons we expect this would happen and all of the scrap made available from the closure of IF capacity can be consumed in China: low steelmaking capacity utilisation and low scrap rates.  It is well understood that there is an excess of steel capacity in China, as in other parts of the world, and this excess is more than sufficient to cover the loss of IF output.  In China, our October outlook for Chinese capacity utilisation of BOF and EAF capacity in 2017 were 79.9% and 61.4%, respectively, both well below sustainable levels.  A complete shift of IF output to BOFs and EAFs would result in an increased utilisation of 81.8% and 78.9%, respectively.  Therefore, the excess of capacity in China can easily absorb the output from closed IF capacity.  Furthermore, both BOF and EAF-based producers in China consume low levels of scrap per tonne of steel output compared to regional peers, meaning there is scope to also increase scrap rates and take up the scrap made available from IF closures.  Scrap rates in Chinese steelmaking are well below regional peers because of two factors: limited scrap supply and an excess of blast furnace capacity.  All of these enable BOF and EAF-based capacity to consume all of the surplus scrap made available by IF closures, while keep blast furnace (BF) utilisation sustained.

IF closures are a potential, but limited, upside for hot metal production
IF producers use only scrap in the production of steel, while both BOF and EAF-based producers use a combination of mostly pig iron and scrap as their feedstock.  Our base case scenario is that BOF and EAF-based producers will take up the scrap made available from IF closures.  This is because the closures will not significantly affect blast furnace utilisation and because scrap rates are low enough in both process routes to accommodate the scrap. 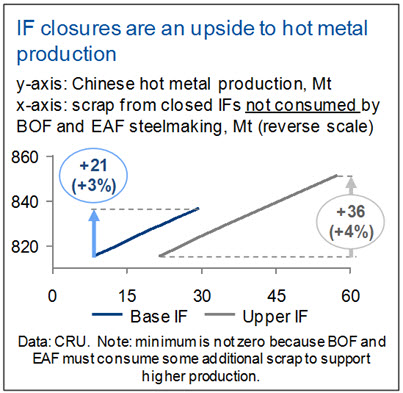 However, if BOF and EAF-based producers do not take up all of the scrap that is made available from IF closures, but do capture the production, this presents an upside for hot metal production.  This upside is the equivalent of the total amount of scrap from IF closures that these processes do not consume less the minimum increase required to support higher steel production.  Thus, the maximum upside for hot metal production from our base case is approximately 21 Mt, on the assumption that there is no impact on foundry pig iron consumption or pig iron net exports due to the closures.  Other agencies have estimated IF production could be as high as 50 Mt.  If we take the upper potential for IF production, the maximum upside for hot metal production if IF scrap is not consumed by other processes is approximately 36 Mt.  For bulk raw materials, IF closures have the potential to increase demand over our base case for iron ore by 33 to 57 Mt and metallurgical coking coals by 17 to 29 Mt.

That said, if BOF and EAF-based producers do not consume the scrap from IF closures this will loosen the obsolete scrap supply and demand balance.  This would lower the price of scrap and, therefore, make this more attractive to these producers.  Thus, we expect that all, or most, of the scrap that becomes available from IF closures will be consumed in these other steelmaking processes.

Conclusion
The closure of IF capacity has been given political priority in China as the government targets low quality output and looks to reduce excess capacity in the steel industry.  IF capacity consumes scrap, which will now need to be consumed elsewhere.  Despite higher scrap rates for BOF and EAF-based production, higher output from these processes will also sustain pig iron consumption.  Furthermore, a slightly more bullish steel outlook in 2017 compared to our October 2016 Outlook means that hot metal production has been increased.  Although a lower take up of the IF scrap would increase hot metal production further, we see limited upside because lower scrap prices would emerge and scrap demand would rise at the expense of hot metal.