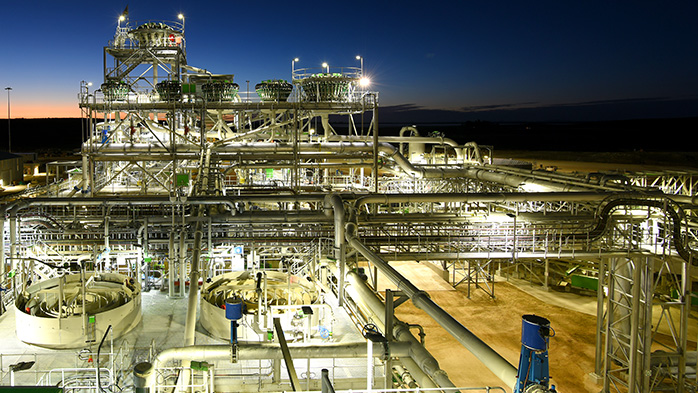 
In the recently published 2017 edition of CRU’s Phosphate Rock Cost Service, our analysis shows that lower prices have squeezed margins significantly despite global average site costs declining 12% since 2014.  Changes in market dynamics, triggered by regulatory changes, provide both opportunities and challenges for phosphate rock producers across the cost curve.

Sliding prices pressure producer margins
Traded phosphate rock prices have declined sharply over the past year, following a period of relative stability. This has been triggered by overcapacity, particularly with OCP (Morocco) ramping up new rock capacity in-line with expansions at downstream facilities. Although global average site costs have declined 12% since 2014, lower prices have severely pressured producer margins. Suppliers of low quality rock, like those in Egypt, are operating on thin margins while some phosphate rock projects, like Kropz in South Africa, have delayed commissioning, in-part due to difficult market conditions. 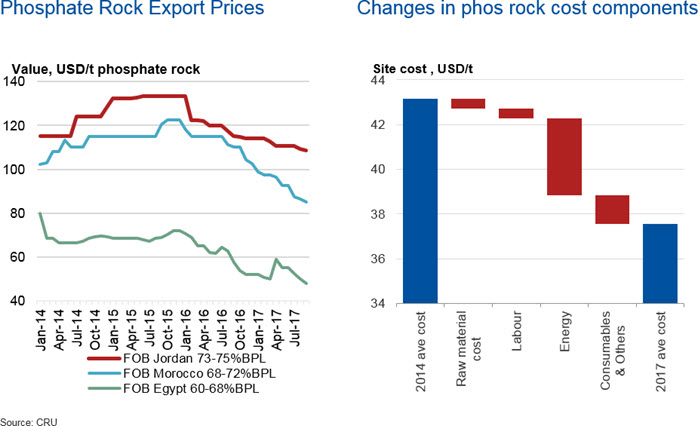 The fall in phosphate rock costs since 2014 is attributed to a collapse in energy and fuel prices, alongside the depreciation of various currencies against the USD. Producers in Russia, including EuroChem, PhosAgro and Acron, all benefited from sharp declines in site costs as the Russian Ruble depreciated in 2015. Russian producers generally incur higher site costs because the deposits are igneous; however, this collapse in foreign exchange rates allowed costs to fall to levels achieved by some miners of sedimentary rock. Meanwhile, the commissioning of a slurry pipeline in Morocco has pulled costs lower there. 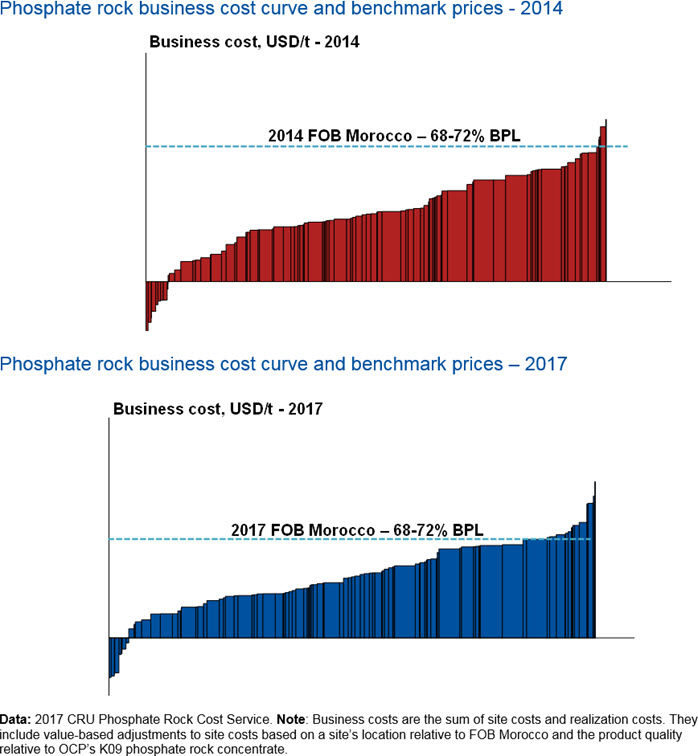 Cadmium content of both organic and inorganic fertilizer has received much attention throughout the proposal process. Phosphate fertilizers can contain heavy metals, including cadmium. Some countries within Europe currently implement strict limits to cadmium levels, due to bio-accumulation concerns. To harmonise bloc regulations, the commission has proposed limits for heavy metals, including cadmium. Under the proposal, limits for cadmium in phosphate fertilizers will be set at 60 mg/kg before being tightened to 40 mg/kg after 3 years and to 20 mg/kg after 12 years.

An EU council vote on the proposed regulations is now set for the 23-26th of October. Despite the pending vote, the industry has commenced strategic preparations for the potential implications of such regulation. Much of the phosphate fertilizer supplied to Europe, along with the raw materials for fertilizer production (phosphate rock or phosphoric acid), are sourced from North Africa, where phosphate deposits are generally higher in cadmium. Indeed, Europe is highly dependent on imported phosphate materials, with the only regional mine located in Finland. 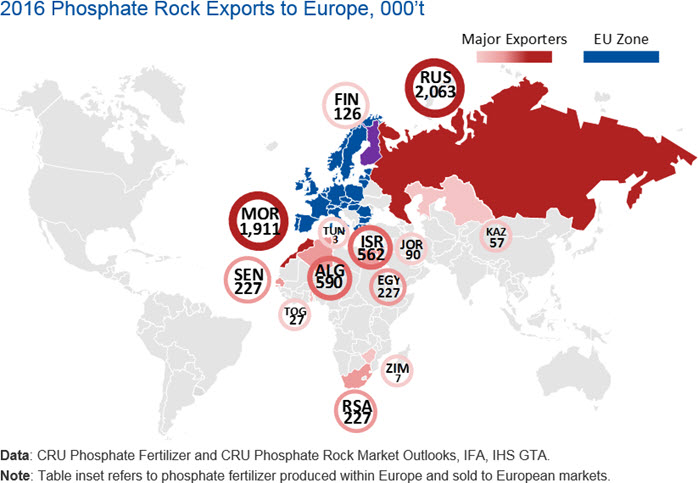 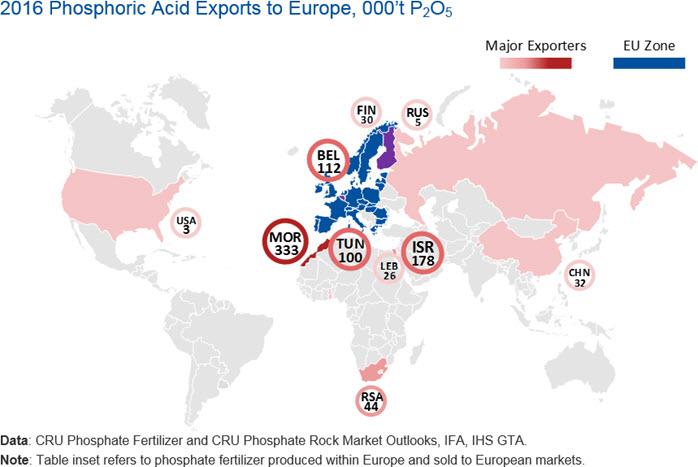 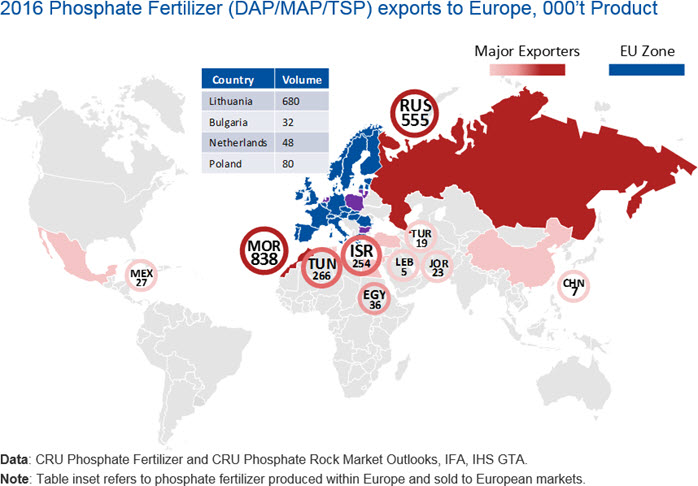 Using a broad set of literature, CRU has collected data points for cadmium levels within deposits from many sites included within the 2017 phosphate rock cost service. The concentration in cadmium level varies widely across deposits (for example, OCP’s Bou Craa mine has measured cadmium levels ranging between 10-106 kg/mg P2O5), but using an average (mean) allows for the analysis of sites potentially affected by the proposed EU regulation.

Rock blending and calcination are two processes implemented within rock beneficiation which help to reduce cadmium levels. However, the adaption and viability of these process is limited. Beyond rock beneficiation, between 10-30% of cadmium is removed via the phosphoric acid process. The cost curves presented below are a collation of sites with collected cadmium deposit data, imposed onto the 2021 phosphate rock cost curve. The curves do not account for any cadmium removal within beneficiation or the phosphoric acid process. 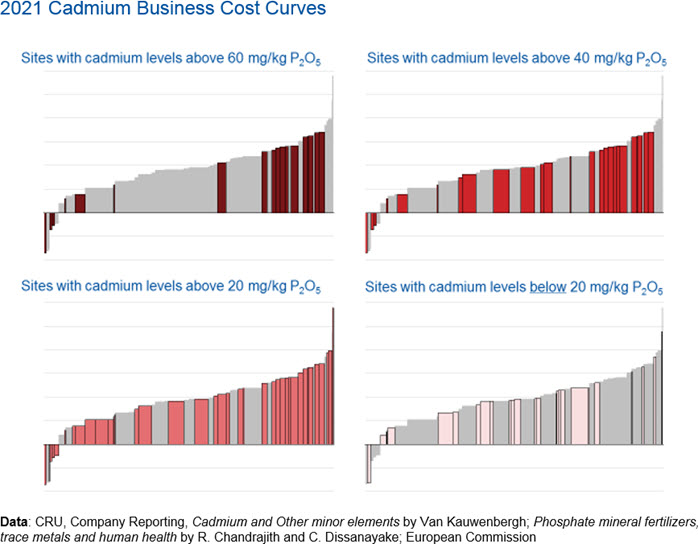 How will the phosphate rock market evolve?
As phosphate rock prices continue to fall, producer cost positions will become increasingly critical. The CRU phosphate rock cost service allows producers/projects to benchmark operations amongst others globally, and is a valuable tool for investors considering options within the market.