Silk Road yellowcake trade and its impact on Chinese stockpiles 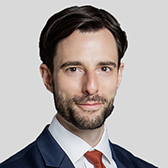 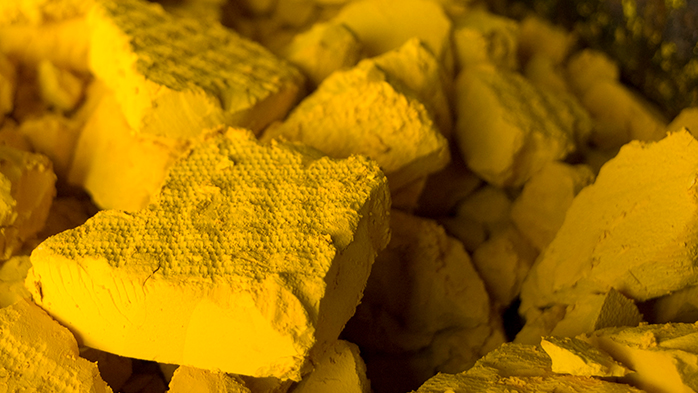 It is difficult to overstate the importance to the uranium market outlook of inventories held by Chinese utilities. Over the past 5-10 years, the magnitude of planned nuclear generating capacity in China has gained credibility, with new reactors successfully brought into operation and planned capacity underpinned by strong Government support.


Whilst the outlook for Chinese nuclear generating capacity has become increasingly clear, the same is not true of the magnitude of current uranium inventories or the timing of future inventory build. Chinese net imports of uranium rose from 2-3% of global demand in the late-2000s, to nearly 25% of global demand, or around 17,000 tUeq., just a few years later, where they have remained since. Given that Chinese reactor requirements were around 7,000 tU in 2014 and considerably less in previous years, this must have resulted in large amounts of stockpiled uranium in the country. But what is the size of this stockpile and what are the implications for the market?

What is the size of China’s uranium stockpile?
Attaching a number to China’s uranium stockpiles is no trivial matter. There are no published statistics and utilities do not release information about procurement strategies. However, it is possible to produce an estimate based on modelled consumption, domestic production and trade statistics. Unfortunately, our analysis shows that trade statistics relating to Chinese imports of uranium present a variety of issues and different interpretations of the statistics can have significant implications on the estimated industry market balance. For example, trade in natural uranium is typically reported on a contained uranium basis, but Chinese Customs report in tonnes of product and it is our understanding that this peculiarity has resulted in the overestimation of Chinese inventories by some commentators, by up to 20-30%.

A smaller, but not insignificant, source of error is the product grade of Kazakh yellowcakes destined for China. Typically, uranium concentrates contain close to 84.8% uranium – the content of pure U3O8. However, many concentrates produced in Kazakhstan are understood to be exported in peroxide hydrate forms that are likely to have uranium contents closer to 70%. The result is that, when Kazakh exports are adjusted by the usual 84.8% factor, trade will be overestimated by around 1,000 tUeq. per year – the equivalent of annual production from Uranium One’s Akdala operation in Southern Kazakhstan, or enough uranium to power a large nuclear power plant for 5 years. Our reconciliation of historical Kazakh export data aligns well with an average product grade in the 75-80% range.

In the table above, we attempt to reconcile Chinese import statistics using Kazakh exports. The results seem to align well with the expectation that average product grade is likely in the 75-80% range (shown in Row C). 2012 is an anomaly that we cannot explain using other data from the same year. Nevertheless, its size does not fundamentally impact the results across the 2010 to 2014 period. A useful cross-check on the reasonableness of Kazakh export data is the difference between total reported production and global exports (shown in Row F). The implication is that around 14% of yellowcake produced in Kazakhstan over the last 5 years has been added to working stockpiles at mine sites and processing facilities in the country. Whilst this is a large number in absolute terms, it is perhaps not unreasonable given the rapid increase in production since the 2009.

A key issue not explained by this assessment is reported exports of uranium from Kazakhstan to Kyrgyzstan. We are not aware of any domestic consumption of uranium in Kyrgyzstan and it is understood that Kazakh ore is sent here for further processing, but no trade statistics on Kyrgyzstan exports are published. Two plausible explanations for the destination of this material are discussed below.

What are the implications for the market?
Our analysis shows that there are significant uncertainties regarding inventories held by Chinese utilities, largely due to issues with trade data discussed above. However, it is clear that China’s stockpile is large and mostly accumulated over the last 5 years, following an unprecedented increase in yellowcake imports, seemingly in tandem with a meteoric rise in Kazakh uranium production. As of end-2015, we estimate that China’s uranium stockpile stood somewhere in the range 78,000-85,000 tUeq. – more than 120% of world annual demand and 10 years of Chinese reactor requirements. Given that Chinese buying accounts for 25% of the uranium market, decisions regarding these inventories could have profound implications for the market balance and prices. The key question is, how does this inventory impact China’s future uranium purchasing behaviour?

Over the long-term, perhaps it is reasonable to assume that the Chinese nuclear industry will reach a level of maturity where inventory behaviour can be compared with other regions/countries that have established nuclear power sectors, such as the US, Europe and Japan, that typically operate with a demand coverage of between 2.5-3.0 years. If, by the late-2030s, China is operating a nuclear fleet with a capacity of 150 GW, it will require 30,000 tU per year to satisfy reactor requirements, which would correspond to a working inventory of between 80,000-90,000 tU – slightly higher than current levels – meaning it could potentially retreat from current levels of purchasing.

China’s strategy for inventory management over the next 10-15 years is source of considerable uncertainty, but we are able to speculate on its likely characteristics:

In-keeping with the characteristics above, we make the assumption that annual demand coverage in China will fall from current levels of around 10 years, to a long-term steady state of 2.5 years by 2035. The impact of this forecast is that China will continue to aggressively build inventory over the next 10 years, before scaling back. This forecast of Chinese uranium inventories and net imports is summarised in the table below. 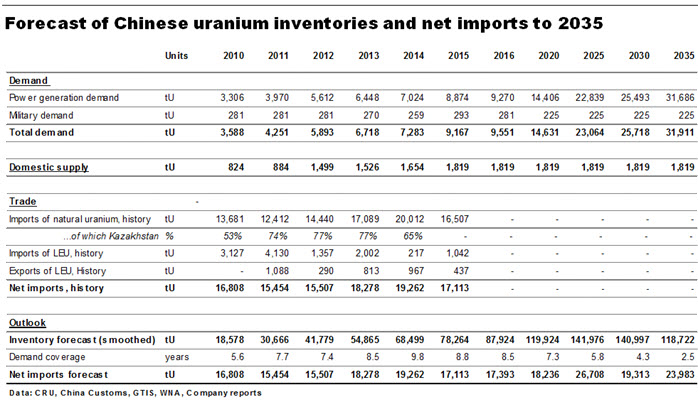 The uranium market is currently loose, with plentiful supply and a severe inventory overhang following the Fukushima disaster of 2011. Furthermore, the cost of holding uranium is low and the value of energy security to the Chinese state potentially very high. We do not rule out China taking a smoother path to the ‘long-term’ inventory levels, the implication of which would be a near halving of imports from recent levels, however, we think China is more likely to opt for the safer option and continue to build inventory during this period of unprecedented reactor construction and easy supply.