The next wave of Australian pellet feed

The structural changes taking place in the Chinese steel industry will lead to increased demand for higher-quality iron ore. This will create opportunities for companies looking to export pellet feed.

Proximity to China means that Australian projects have the potential to be the main beneficiaries of this change and there are several mines at various stages of development in the country. However, a poor track record of project implementation in the country may leave investors wary.


China’s push for productivity
In CRU’s Iron Ore Long Term Market Outlook, released in September, a key theme that emerges is how the Chinese steel industry of tomorrow is likely to differ from that seen on the ground today. Broadly speaking, our analysis suggests that the Chinese steel industry will produce more of its hot metal requirement from a smaller number of larger blast furnaces – and these furnaces will be operated at higher capacity utilisations. The steel industry in China is changing from a situation of overcapacity, categorised by low profitability and high debt levels, to one where profit levels are structurally higher. Please see this insight for more information on this.

As a result of this transition, CRU expects the average blast furnace burden in China to change, as companies seek greater productivity from their installed capacity. In 2016, our analysis suggests that sinter comprised 78% of the typical blast furnace burden, with pellets comprising 10%. However, in 2030, we expect sinter and pellets to comprise 67% and 18%, respectively. For two reasons, these projected burden changes are expected to result in a surge in demand for pellet feed imports into China. First, there is extensive pelletising capacity in China that was operating at an estimated average capacity utilisation rate of 45% in 2016. Second, CRU’s research indicates that China will not be able to expand production of domestic concentrate. Although a greater proportion of domestic concentrate will be diverted to produce pellets in the future, the majority of domestic material will continue be consumed in the production of sinter until at least 2035. Imports of finished pellets are also not expected to materially increase, given China’s expected desire to utilise its own industry to add value and the lack of additional pellet that could be diverted into the Chinese market. 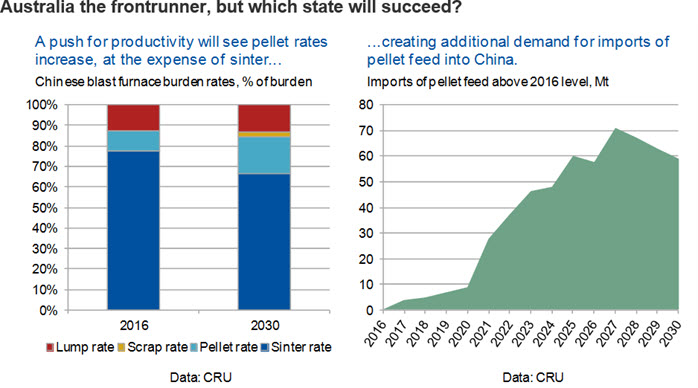 Australia, due to its proximity to Asia and abundant reserves of magnetite, stands out as the most likely choice to satisfy China’s increased demand for pellet feed. However, the country has a chequered recent history with magnetite mines, with both Sino Iron and Karara encountering cost blow-outs and problems both building and operating their assets. CRU assesses that there are six potential projects that are most likely to form part of any next wave of Australian magnetite supply. Three of these are located in the traditional iron ore heartland state of Western Australia, while the remaining three hope to export their material from South Australia, a state that has pulled back from the export market since Arrium (n.b. now Liberty OneSteel) switched its focus to providing iron ore solely for use at its own steelworks, located in Whyalla.

South Australia: a new export centre for Australian iron ore?
Several large-scale magnetite projects have been proposed in recent years in South Australia, following increased exploration in the state in the years following the China-led boom in iron ore prices. The state government, sensing an opportunity to increase local employment and revenue, developed a magnetite strategy with the twin goals of attracting A$10 bn of investment into the industry and of producing 50 Mt/y of magnetite by 2030. Although more than 10 mines have been identified as possible development opportunities, CRU has assessed that three projects have the greatest potential to move into production. These include Iron Road’s Central Eyre Iron Project, Carpentaria Exploration’s Hawsons Project and Magnetite Mines’ Mawson Iron Project. These three mines are located far from each other, with Iron Road’s project located on the Eyre Peninsula, Magnetite Mines’ project located in the Braemar Iron Formation, inland from Port Pirie, and Carpentaria Exploration’s project is actually located in NSW near Broken Hill, although the project plans to export from South Australia.

All three of these projects have gone to great lengths to stress aspects of their mines that illustrate how they differ from their peers, but a common theme is that magnetite in South Australia tends to be, on average, softer and less abrasive than magnetite currently being mined in Western Australia. This is highlighted by the Bond Work Index, a metric that gives, in kWh/t, the electrical power needed to grind the ore to a standard size. Magnetite mined from the Pilbara typically has a Bond Work Index of >20 kWh/t, whereas most South Australian projects expect to see values <10 kWh/t. This should lead to lower power use and fewer plant shutdowns, allowing for more reliable operations, lower operating costs and lower sustaining capital expenditure.

The sheer scale of these operations also differentiates them from other projects, with all three mines expecting to produce at least 10 Mt/y for over 20 years from in-situ resources greater than 1 bn t. This scale allows for in-pit crushing and conveying to be used effectively, with all three mines suggesting they will utilise this technology. When considered in conjunction with the low-stripping ratios expected, this should see each mine able to export at competitive costs. A series of letters of intent from steelmakers in both the Middle East and Asia suggests that a healthy appetite exists for South Australian magnetite. The onus now is on these producers to firm up their operational plans in order to gain financing for their projects.

Western Australia: Iron Bridge leads the way
Despite South Australia putting forward the case that projects in the state are viable and attractive investment propositions, miners in Western Australia are not resting on their laurels. As the largest producer of iron ore, Western Australia has the advantage of an established local knowledge and employment base, alongside a large-scale mining support industry that can be leveraged to provide support to any potential projects in the state. The fact that Port Hedland and Albany are 2,000 nm and 1,000 nm closer, respectively, to China means that freight costs would also be lower than for iron ore exported from South Australia. All of these factors and more, as well as capital costs, are taken into account in our modelling of these operations, which allows us to determine the relative competitveness of individual projects.

The state government, like their South Australian counterpart, also sees the potential for increased revenue and employment if projects come to fruition and has publically spoken about the desire to see more magnetite resources exploited. The government currently has in place a magnetite royalty rebate where 50% of all royalties (n.b. currently 5% for beneficiated ore, the same rate as in South Australia) in the first year of operation will be given back to the operator on a quarterly basis.

The Iron Bridge Joint Venture, located within trucking distance of Port Hedland and owned by Fortescue Metals Group, Baosteel Group and Formosa Group, is the most advanced magnetite project in Western Australia, with a pilot plant already in operation. The Southdown Joint Venture, owned by Grange Resources and SRT Australia, also hopes to develop a mine near Albany, in the South of the state, although progress has stalled since a feasibility study was completed in 2012. Balla Balla Infrastructure, part-owned by Todd Corporation, also owns a magnetite project in the Pilbara, but it is believed that the development of this project will be assessed only after Flinders Mines’ Pilbara Iron Ore Project, a proposed hematite mine, is built. 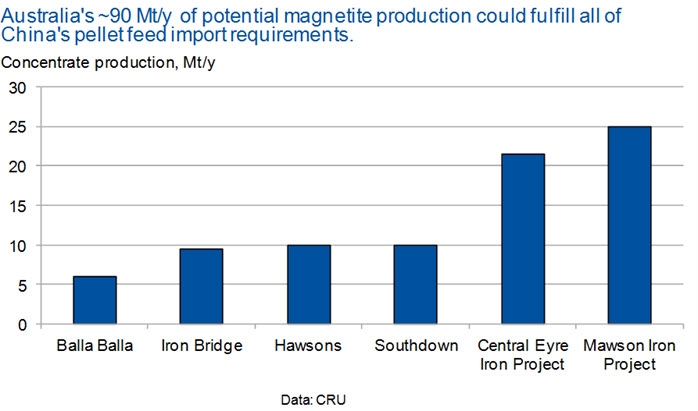 Any next wave of Australian magnetite projects, whether from Western Australia or South Australia, will hope to fulfil China’s increased demand for pellet feed. With several other projects located in Brazil and Canada, Australian producers will be confident they are best placed to bring additional tonnages into the market. The next and most important step is to convince those with the chequebooks that they are correct.

CRU’s Iron Ore Long Term Market Outlook contains full details of all the iron ore projects discussed here, as well as others elsewhere in the world, including resource characteristics, mine operations, expected capital costs and modelled operating costs. If you want more details on our assessment of the long-term market for iron ore, including supply, demand and prices, please get in touch.